When two teenagers disappear late one night while swimming in a pool inside an abandoned military complex it’s up to Maggie (Heather Menzies) a professional skip tracer to find them. She recruits Paul (Bradford Dillman) a drunken backwoods loner to serve as her guide. As their investigation continues they learn that the swimmers were killed by some mutant fish that had been created by the government to be used as a weapon during the Vietnam War. Now that the war was over they were being kept inside a secret underwater tank, but when Maggie inadvertently drained the tank in order to search for the bodies she released the fish down the river where they are set to attack a children’s summer camp of which Paul’s daughter Suzie (Shannon Collins) is in attendance.

This is billed as a spoof of Jaws and supposedly according to Leonard Maltin’s review loaded with in-jokes, but to me I saw very little that was humorous and in many ways this film could work as a legitimate horror film on its own. The only amusing moments I found are when Maggie plays a Jaws video game near the beginning as well as a female beachgoer who is spotted reading ‘Moby Dick’, but otherwise the chuckles are light unless you count Dick Miller as an overzealous promoter who is indeed pretty funny.

The film starts out like I wants to be different from the typical horror film and initially I was intrigued particularly with the two protagonists. Normally the female/male leads in these types of films consist of good-looking teens/college aged kids, but here we get a guy who was near 50 and a female, who although being quite attractive has more of a take-charge attitude that is usually seen in a guy. Having the film play against gender stereotypes was for me the best thing it had going for it and I really liked the way the awkward relationship between Maggie and Paul initially developed.

Unfortunately it doesn’t stay that way and by the halfway mark Paul is the one taking control while Maggie is just tagging along, which I found disappointing. It also tries to sneak in a romance angle, which is ridiculous since the guy was clearly old enough to be her father. Paul is also seen continually drinking alcohol, but he never shows any signs of being inebriated and I realize alcoholics have a higher tolerance to the stuff, but still I doubt he would’ve been able to stay so sharp and heroic as he ends up being while still under the influence as he supposedly is.

The fish attacks become monotonous and consist of the same shot of rubber fish put on strings shown swimming towards their prey and the sound effects used for the fish when they start biting was performed by underwater dental drills, which to me sounded cheesy. There are a lot of pools of blood that form around the victim as he/she are being bitten, but not much else in the way of special effects. Only at the end does it get gorier and there’s even a shot of one of the fish coming straight towards the screen with its toothy mouth wide open, but I felt this should’ve been put in earlier.

The supporting cast of eclectic B-movie stars is interesting but underused and this also marks the final film appearance of Barry Brown who at the age of 27 killed himself just two months after the film wrapped shooting and was already dead by the time it was released to theaters. Overall though, the whole thing, which was remade in 2010, is watchable but disappointing. The humor and offbeat elements should’ve been played-up much more and the characters made to be more eccentric especially the two leads. In the end it becomes just another routine horror flick that’s no better or worse than the hundreds of others that are already out there. 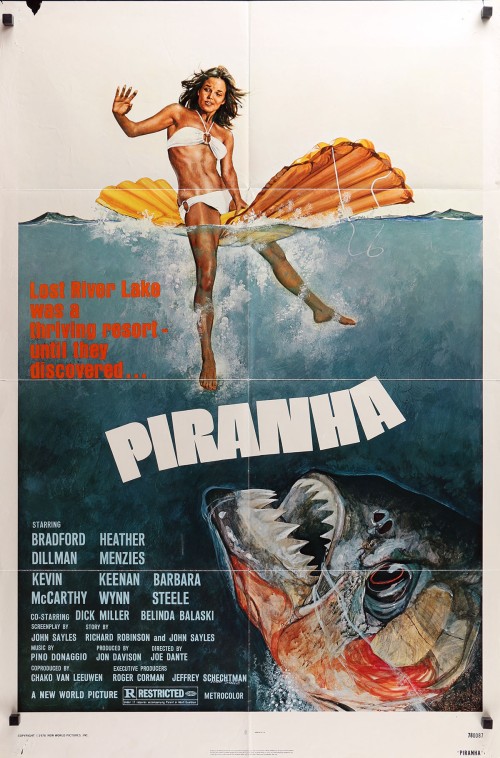