An old walking cane with a distinctive silver handle that had been used as a prop in many old Hollywood movies is stolen by a prostitute named Vera (Nancy Fisher) after it is laid on top of a casket of deceased actor at his funeral. Later Vera is murdered inside her apartment by a man named Chess (Frank Ashmore) who retrieves the cane, but not before coming into a violent confrontation with Shep (Fred Williamson) a black private eye who lives across the hall from her. Chess manages to escape, but Shep decides to track him down in an effort to find out why everyone is after the cane and what secret it might hold.

The film is an okay blend of action and mystery that tends to show its cards to soon. The revelation for why the cane is so much in demand is quite predictable and makes the viewer feel like they wasted an hour and a half of their time watching a pedestrian plot that leads nowhere. Director Jack Arnold dresses the story up by inserting offbeat scenes and eccentric characters that only adds a mild diversion to the proceedings, but still culminates with a flat finish.

Former pro football player Fred Williamson who played for the Kansas City Chiefs during the ‘60s is the best thing about the movie. Other athletes who turned to film acting after their sports careers were over were not as adept in front of the camera. Jim Brown for instance was great on the gridiron, but lacked an ability to play anything more than a hardened tough guy whose facial expression never changed. Williamson has more of an appeal because he doesn’t take himself or his role too seriously while also showing an ability to play either comedy or drama.

His female co-stars though are wasted and really didn’t need to be in it at all. Theresa Graves looks beautiful, but her character has no integral link to the story the lesbian angle dealing with the relationship that she has with her white girlfriend (played by Rosemary Forsyth) seems to be thrown in simply to give the film a certain perceived ‘kinky’ edge. Forsyth for her part has her voice dubbed and for what reason I don’t know, but it’s distracting and unnecessary.

88 year-old Cyril Delevanti, in his final film appearance, is quite amusing as an elderly man who’ll stop at nothing to get his cane back, but character actor Richard Anderson is a detriment. He plays a father who hires Shep to find his missing runaway daughter (Susan Arnold). At the end Williamson and Anderson get into a fistfight with Anderson doing his own stunts, which looks fake. A shot capturing him lowering his foot towards the camera in a dramatic attempt to show him stomping on Williamson (with the camera working as being Williamson’s P.O.V.) doesn’t work because it is clear that he is restraining his foot so it doesn’t actually hit the camera and break it. If you’re going to do a shot from this angel then have the foot actually pounce onto the camera even if it means damaging it because that would make it appear more authentic, or otherwise don’t do it at all.

For those that enjoy blaxploitation flicks from the ‘70s you may give this one, which is based on the novel ‘Murder on the Wild Side’ by Jeff Jacks, a slightly higher rating than I did. Some of the action is good especially a scene where Williamson escapes out of a immobile elevator and shimmies his way down the elevator shaft, but overall there’s nothing else about it that is distinctive to raise it above all the other black action films that are out there.

4-Word Review: She fucks a doll.

Helen Black (Shirley L. Jones) is a devoutly religious woman living alone and spending most of her time going to church while also believing sex should only be within the bounds of marriage. One day she visits an antique store and spots a puppet that catches her fancy. She decides to buy it despite vague warnings by the store clerk that it possesses strange powers. When she brings it home it suddenly comes alive, ties her up and begins having sex with her, which she finds that she actually enjoys. When the doll disappears she decides to throw away her religion and become the neighborhood slut instead by picking up strange men wherever she can find them and bringing them back home for raunchy action.

This movie could best be described as the low budget, soft core porn version of Trilogy of Terror and while the story has some outrageously voyeuristic elements the production quality is so poor that it never allows the viewer to get into it. The whole thing is shot on a grainy VHS tape giving it a very amateurish look from the get-go. Certain scenes are out-of-focus and director Chester Novell Turner seems to have no understanding of editing as the camera pans wildly when simply cutting to a certain shot would’ve made more sense. There is a lot of extraneous footage as well including watching Jones walking down the sidewalk that seems to go on endlessly and an overplayed thumping music score that becomes headache inducing.

Just about all the action takes place in Helen’s cramped, rundown home, which has no visual appeal whatsoever. The sex scenes are gross and all the nudity comes from star Jones who is not exactly model quality or someone you’d want to see naked.

The only interesting aspect is the doll itself especially with its vulgar dialogue, but unfortunately he’s not in it enough. The effects used to create him are botched as it is clear when it gets shown from behind that it is not a puppet at all, but a small child, or in this case the director’s nephew.

Sitting through this is an arduous challenge. IMDb lists the runtime as 1Hour and 10Minutes, but the version I saw went almost a full 90 minutes. Some may find a few cheap laughs at the beginning due to its technical ineptness, but watching it all the way through becomes torturous and makes having sex with a puppet, or even killed by one seem enjoyable by comparison. 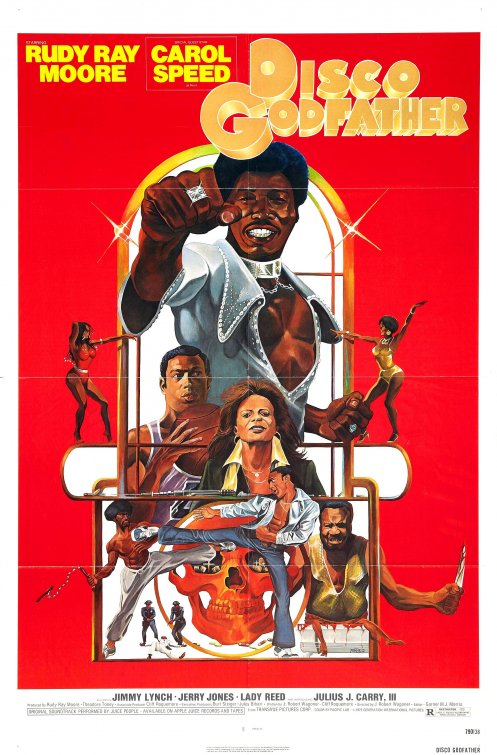 Tucker (Rudy Ray Moore) is the DJ at a local discotic known as Blueberry Hill who becomes concerned when his nephew takes a new drug called angel dust that causes him to have weird hallucinations and forces him into the hospital. Since Tucker is also a former cop he decides to use his connections with the police force to take down the drug dealers and clean up the streets before they can corrupt any more of the youth, but the dealers have other ideas including kidnapping Tucker and forcing him to ingest the drug via a gas mask.

This was the fifth feature for Moore and the last one where he was credited as the star. The former comedian created a character for his stage act called Dolemite that proved so popular that in 1975 it was turned into a movie and Moore became a star at the age of 48. Yet by this time the act was starting to get old. He still had the energy, but seeing a man who was clearly in his 50’s somehow able to beat up guys who were much younger and bigger than him didn’t make a lot of sense.

The story itself is run-of-the-mill and splicing in disco dance numbers where the camera conspicuously focuses in on the scantily-clad gyrating bodies of the females doesn’t help and if anything makes it even more boring. The fight sequences looked quite staged and it’s obvious that the actors are pulling their punches and kicks.

The only thing that makes this otherwise uninspired low budget mess slightly diverting are the drug sequences in which the characters start tripping out on all sorts of weird hallucinations as well as a segment dealing with a religious group trying to ‘cure’ one of the victims through an exorcism. The final segment in which Moore sees his mother turning into a devil is goofy enough to give this thing 2 points and had this movie cut out the derivative drama and emphasized more of a surreal quality it would’ve done better.