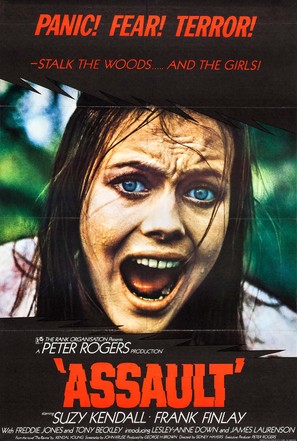 One day after school Tessa (Lesley Ann-Down), a teen who attends a local British high school in rural England, decides to cut through the nearby woods as a shortcut on her way home. As she treks through the forest an unseen assailant attacks her, which leaves her in a catatonic state. A few days later, despite the warnings, another female student goes into the woods and is later found murdered. The police inspectors (Frank Finley, James Cosmo) have idea who it could be and are unable to come-up with any leads, which frustrates the local teacher Julie West (Suzy Kendall). She decides it’s up to her to nab the culprit, so she uses herself and some of her students as bait to lure the killer out. She drives into the woods in a station wagon, but then the car gets stuck. While she tries to back it out she gets a glimpse of the perpetrator’s face as he deposits another of his victims, but when she describes to everybody what he looks like, saying he has the face of the devil, everyone thinks she’s gone mad.

This is another one of those British thrillers where in an attempt to gain more interest in the film the studio would release it under different titles. In the US the film was known as ‘In the Devil’s Garden’ to take advantage of the possession craze that was occurring after the release of The Exorcist and then a few years later it got re-released under the title ‘Satan’s Playthings’ and billed as a provocative story with erotic overtones. In either case the plot, which is based on the novel ‘The Ravine’ by Kendal Young, comes-off more like a cop drama/mystery than a horror flick.

That’s not to say it’s bad as director Sidney Hayers throws in some good touches. The attack on the girl is well handled using a hand-held camera that makes it seem unrehearsed and sudden. For a British thriller it’s even kind of racy. Normally films from England are quite timid about showing nudity, blood, or violence, but this thing does push-the-envelope a bit, far more than I was expecting, while still remaining ‘tasteful’ enough not to come under the ire of the British censors. The pounding music score helps create an urgent mood and grabs your attention at the start though it gets overplayed by the end and resembles a score heard on a cop TV-show.

The acting is good, but seeing Down looking so young and appearing much different from what we’re used to seeing her now kinda threw me off as you’d almost think she’s a completely different person. Kendall, who became a British scream queen for all the horror movies and thrillers that she was in, is quite appealing and I loved seeing her in glasses, which gives her a certain sexy look. The male actors are okay, but there’s more of them than are necessary and I think this was only done to create more suspects to choose from though their 70’s haircuts complete with long sideburns gives the film a very dated quality.

I was able to guess who the culprit was with about 20-minutes to go. It’s not that hard to figure out and the film gives-off a few too many clues to the point that it would be hard for someone not to know who it is. The story itself is standard. Not much thrills or chills though the electrocution via a cable that the victim touches while climbing up an electrical tower is admirably realistic and probably the most impressive part of the movie.