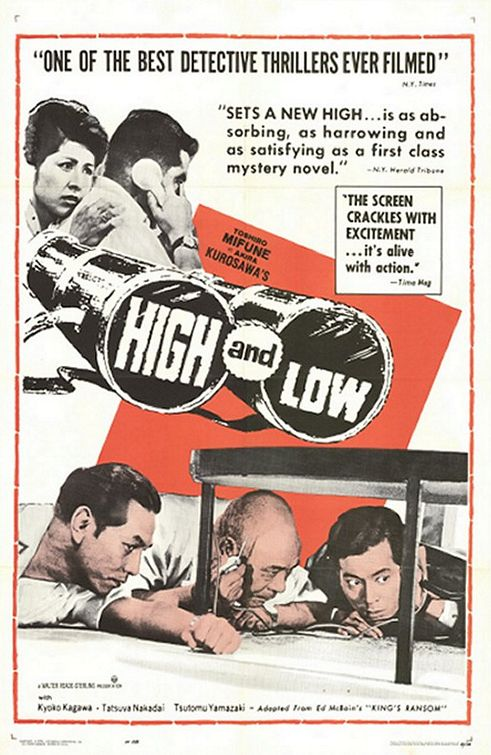 Kingo (Toshiro Mifune) is an executive of a shoe company who finds out that his chauffeur’s son has been kidnapped and comes under tremendous pressure to pay the ransom even it will make him bankrupt.

As with all of Akira Kurosawa’s films the production values are solid and the story is well paced. The very methodical police work and investigation is interesting and enlightening. It’s certainly nothing like today’s CSI shows, but well done for its period. The ending scene where Mifune faces the kidnapper leaves a strong and memorable impression.

However, on the negative side the set-up to the kidnapping happens too quickly without any type of buildup or tension. Almost the entire first hour takes place inside the living room of Kingo’s hilltop house and it would’ve helped to have some cutaways to other locales.  Mifune, who is billed as the star and gives a great performance disappears during the second hour only to finally reappear at the very end and I felt it would’ve been stronger had he been involved more in the investigation. Also, the revealing of the kidnapper is unexciting and a big letdown.  I had a hard time understanding why a guy who was so very crafty and sophisticated in every facet of his planning of the kidnapping would suddenly get so conveniently dumb and sloppy at the very end.

This is a decent Kurosawa entry, but in my opinion not one of his best. Yet it is still good enough to keep you captivated from beginning to end. 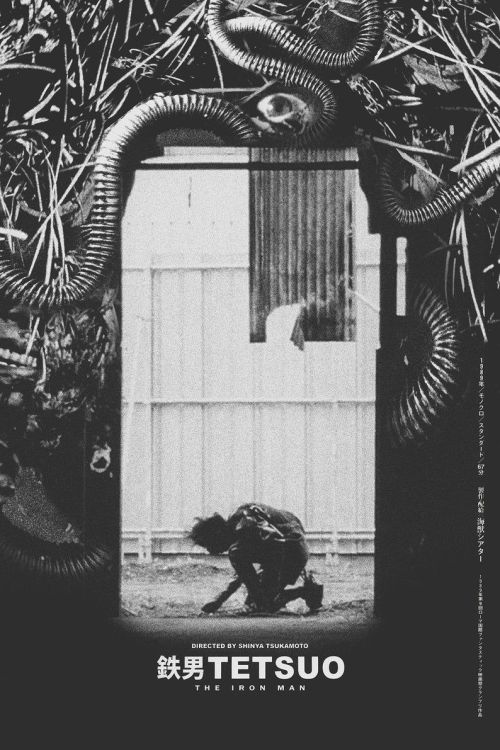 This is one of the most bizarre and fascinating films ever made. It reminded me a lot of David Lynch’s Eraserhead, but with a little more linear storyline and engaging tongue and cheek humor.  It all depends on one’s tolerance as to how much they will enjoy it. Some will find it weird and alienating while others will insist it’s brilliant.

The story centers on a very strange man, played by the film’s director Shinya Tsukamoto, who has a freakish compulsion to stick scraps of metal inside his body.  He cuts his leg open and crams a metal pipe inside of it, which causes him excruciating pain.  He runs through the streets screaming and is hit by a car driven by a man (Tomorowo Taguchi) who is never given any name.  The driver and his girlfriend think that they have killed him and decide to dump the body along a riverbank and then make love in front of it. The next day the man notices while shaving that a metal nail is protruding out of his cheek. Soon metal parts start to grow from every part of his body until he is completely unrecognizable.

Despite being made over twenty years ago I found the special effects to be awesome and able to stand-up to today’s standards. The opening part where the man stuffs a metal pipe into his cut open leg appears so real that it made me cringe. The amount of metal growing out of the main character’s body becomes almost mind boggling and has to be seen to be believed.  The immense metal suit that the actor ends up wearing and having to walk around in is massive and I wasn’t sure how he could even move in it as it looked incredibly heavy.  The stop-action photography is fluid and watching the metal metamorphose in different and imaginative ways is fun. I found the grainy black and white photography to be highly effective and it helps accentuate the nightmarish vision of the story.

The story also features dreamlike segments while although not always making sense and sometimes jarring to the story, still are memorable. The scene where the main character is chased through the catacombs of an isolated train station by a woman who has turned into a robotic mass of metal is cool.  There are a few kinky elements that are shocking, tasteless, and hilarious all at the same time. They include the man’s girlfriend with a mesmerizing stare who becomes a zombie during one of these visions and rapes him with a metal pipe that has sprouted out of her vagina.  Then, a few scenes later, he turns around and rapes her with his penis that has turned into a giant whirring drill.

Although I applauded the film’s no-holds-barred creativity that seemed years ahead of its time, I did feel that it was confusing and disconcerting.  There are too many jump cuts and wild images thrown at the viewer without any explanation. It does finally come together at the end, which is good, but I would have liked a better set-up. I wanted to see more character development, which basically is none and some explanation for why all of this was happening.  A little more conventional narrative could have gone a long way. I also felt that it became too one-dimensional. Metal grows into more metal that grows into yet even more metal until it becomes almost boring. Although the running time for the picture is only 64 minutes I felt that this was actually too long and I would have wanted it shortened even more as the story seems to play itself out and have nowhere to go.

Fortunately it is saved by a very satisfying over-the-top ending that nicely brings it all together.  The strange man inexplicably comes back to life and the two duel things out in the vacant city streets. The apocalyptic over-tones here are terrific and the last sequence where the two fuse together to form one giant metal mountain has to be one of the most extraordinary images ever to be put on celluloid.  Their final conversation is insanely funny.

Again, as I stated before, this is not going to be for everyone. There is a real underground look and feel here that is going to offend some while amaze others. Nonetheless it has justifiably acquired a large cult following that seems to never stop growing and it has spawned several sequels that have all been done by the same director. This one though is still the best of the series. I recommend it to those with perverse, offbeat tastes and an extremely dark sense of humor.