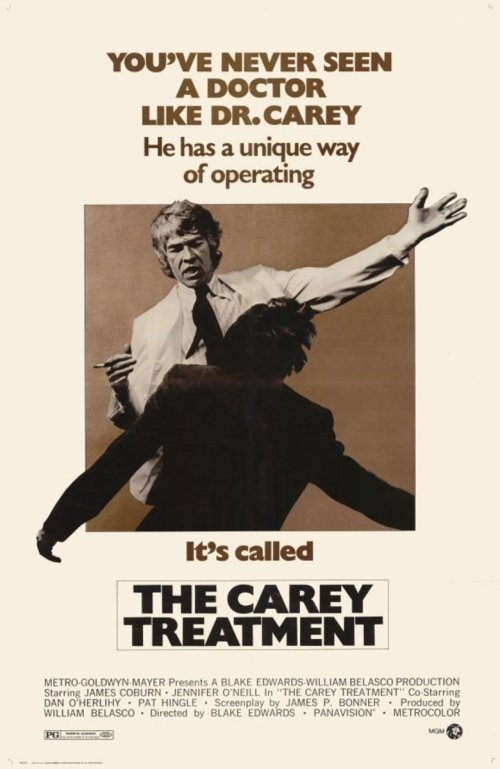 Based on an early Michael Crichton novel, the story centers around Dr. Peter Carey (James Coburn), who starts a new job as a pathologist at a local Boston hospital and soon finds himself embroiled in a mystery when his good friend Dr. David Tao (James Hong) gets accused of performing an illegal abortion on the daughter of the hospital’s chief surgeon (Dan O’Herlihy), which later kills her. Carey is not convinced that his friend performed the procedure and sets out to prove his innocence when the police are of no help.

This film was noted for its behind-the-scenes turmoil including accusations from director Blake Edwards that he was belittled by the film’s producer William Belasco in front of the crew and told that he would never work in Hollywood again and afterwards having the film edited without his permission. Edwards later sued and his experiences working on this project became the basis for his 1980’s film S.O.B., which savagely satirized the movie making business and the people who ran it.

The plot isn’t bad and attempts are made to give the viewer an authentic feel of the medical profession. One of the better moments is when the doctors perform an autopsy on the victim although I wished they would’ve shown more of the actual corpse on the examining table instead of cutting away from it in an attempt to be ‘tasteful’ as I felt the procedure and what the men discussed during it to be genuinely educational.

Having a hip doctor suddenly turn into an amateur sleuth is the film’s biggest drawback. Coburn plays the part well, but a guy who’s never investigated a case before wouldn’t be so seasoned with the way he handles suspects and tackles clues. He comes off too much like a professional detective who’s spent years in the business and not just a regular person who stumbles into the situation without knowing what he’s doing. The slick way that he solves the case and gets the necessary information is impressive, but not believable. Most people would’ve simply hired a private detective to investigate it and not spent hours away from their job trying to do it themselves, or if they take on the task they would most assuredly have make some mistakes, which this guy never does.

The mystery has enough intriguing elements to remain engaging, but the ultimate reveal is dull and makes one feel like they sat through a big buildup to nothing. 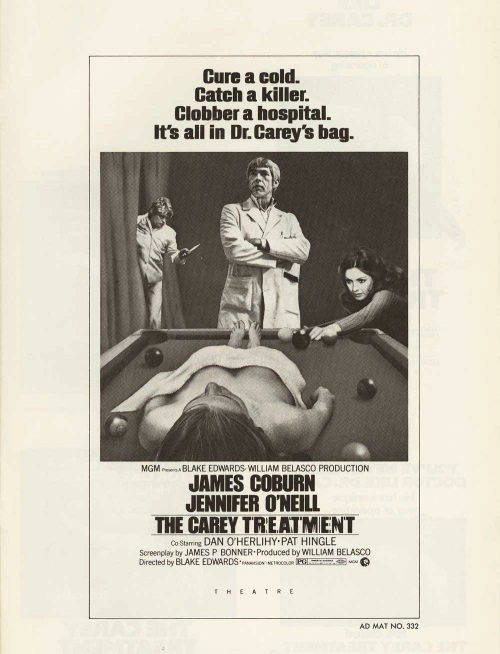 Posted in 70's Movies, Movies Based on Novels, Movies with a Hospital setting, Mystery

The film is loosely based on experiences that writer/director Blake Edwards had along with his real-life wife actress Julie Andrews during the early ‘70s when their project Darling Lilli did not do well financially and his next several films after that met with lots of studio interference before he was finally able to rebound by resurrecting the Pink Panther franchise.

The satirical jabs are obvious but amusing and the real problems come more with the shallow/jaded characters. Even the wholesome Sally comes off as cold with her rather ambivalent reaction to her husband’s depression/suicide attempt. There is also a running gag dealing with a man (Herb Tanney) who has heart attack at the beach while jogging and his loyal dog stays by his side even though no one else pays attention to it, which starts out as darkly amusing, but eventually gets cruelly overplayed.

Mulligan makes a flat impression as the star to the point of being almost transparent. For the first half he doesn’t say a single word while behaving in an overly exaggerated despondent way. When he finally snaps out of this he then eagerly tries to sell-out on his own film vision simply so it can make a buck, which makes him no better than the rest of the scummy Hollywood elites that he is supposedly trying to fight. Andrews is boring too and her brief topless scene comes off as exploitive and ill-advised.

The best bits come from its supporting cast. Robert Preston as the perpetually inebriated doctor has a few great lines and Robert Webber does well as a very nervous, high-strung press agent. Loretta Swit is hilarious as a bitchy, cantankerous gossip columnist who gets cooped up in a hospital after an accident and an almost unrecognizable Larry Storch hams it up under heavy make-up as a spiritual guru. There is also Robert Vaughn wearing high heels and women’s clothing.

I enjoyed the film within a film approach and the tawdry dream-like sequence scene, but the story suffers from adding in too much slapstick including a drawn-out car chase that seems suited for a completely different type of movie. For mild comedy it is okay, but as satire it fails to make any strong or impactful statement.

4-Word Review: They buy a piano.

Spence (Ted Danson) works as an actor and during a break in shooting, which is being done at a local horse track, decides to take a rest in a nearby horse stall. While he is there he overhears a conversation between two men (Stuart Margolin, Richard Mulligan) in the next stall discussing how they are going to inject a horse with a drug that will cause him to run faster and therefore make him a ‘sure thing’ in the his next scheduled race. Spence decides to use this information to bet on the horse and make a killing at the track with the help of his friend Dennis (Howie Mandel), but the bad guys realize that they’ve been found out and try to nab Spence and Dennis before they are able to place the bet. Spence and Dennis try to hide from their pursuers by attending an auction where they inadvertently purchase a piano, which they must later deliver to a rich customer (Maria Conchita Alonso) who is dating a mobster (Paul Sorvino).

I was genuinely shocked at how limp and threadbare this script was and how it routinely resorted to some of the most empty-headed humor I’ve ever seen. Much of it consists of long and extended chase sequences that aren’t particularly exciting or imaginative and rely on gags that we’ve all seen a million times before.

The casting is also off. Margolin can be a great character actor, but not in this type of role and Mulligan’s dumb guy routine and facial muggings is to me the epitome of lame. Danson doesn’t seem particularly adept at physical humor and shows no real chemistry with his co-star. Sorvino, who walks around with a limp, gets a few chuckles, but believe it or not I came away liking Mandel the best and actually found him to my surprise to be the most normal person in the movie.

The intention was to make this a completely improvisational exercise, which would give the actors free rein to come up with lines and scenarios as they went while relying on the broadest of story blue prints as their foundation, but the studio wanted more of an actual script and forced director Blake Edwards, who later disowned this project, to approach the thing in a more conventional way. The result is a mish-mash of nonsense that doesn’t go anywhere and makes the viewer feel like they’ve done nothing but waste their time in watching it.

All could’ve been forgiven had they at least played up the piano moving bit, which is what I was fully expecting. The inspiration was to make this a remake of the classic Laurel and Hardy short The Music Box with a scene, like in that one, where the two stars must somehow move an upright piano up a long flight of stairs. However, instead of showing this it cuts away to the next scene where the two have somehow without any moving experience gotten the piano up the stairs with apparently no hassle, but what’s the use of introducing a potentially funny comic bit if you’re not going to take advantage of it?

I still came away somewhat impressed with the way that it managed on a very placid level to at least hold my interest. I suppose in this era where scripts with a plethora of winding twists tend to be the norm one could almost deem this a ‘refreshing’ change-of-pace in its simplicity. Those that set their entertainment bar very low may enjoy it more.

4-Word Review: Clint and Burt together.

Mike Murphy (Burt Reynolds) is a private eye living in 1930’s Kansas City who at one time worked as a cop. When his friend Dehl (Richard Roundtree) gets murdered after obtaining the secret accounting records of a local mobster and then trying to blackmail him with it Mike goes on a mission to find the culprit, but soon finds himself in over his head. His former police partner Speer (Clint Eastwood) gets involved and the two reluctantly work together to solve the case despite the many clashes with their personalities and methods.

The script was written by Blake Edwards who gets credited under the pseudonym Sam O. Brown. He was originally slated to direct, but Burt didn’t want to work with Edward’s wife Julie Andrews who was cast in the role that later went to Madeline Kahn because the two had clashed just a year earlier while starring in The Man Who Loved Woman. Clint desired a less intense director at the helm, so the two used their star status to have Edwards yanked from the project and replaced with actor-turned-director Richard Benjamin. The result is a strange mish-mash of a movie that at times seems like a pedestrian action flick and at other moments becomes a campy comedy.

The film starts off well. I enjoyed the fight Reynolds with has with two men inside a café while Eastwood sits back and does nothing, but things deteriorate quickly after that. Part of the problem is Eastwood and Reynolds are only funny when they are seen together and working off of each other’s contrasting styles. Alone there are boring at least here with Eastwood playing too much of a caricature of himself while Reynolds is unconvincing as a tough guy. The film would’ve worked much better had the two been partners from the very beginning instead of throwing in this contrived bitterness between the two, which is never funny or interesting.

Outside of Rip Torn’s performance as a rival gang boss the supporting cast is wasted especially Jane Alexander in a thankless throwaway role as Reynold’s secretary. Kahn manages to have some redeeming moments when she gets kidnapped by the mob and then beats her captors at poker, but it is not enough. Irene Cara sings a few good tunes, but proves to be weak as an actress.

The shootouts are great and the best thing in the movie as unlike the rest of the film they manage to have a nice balance between being exciting and funny. Unfortunately the plot itself is overblown, confusing and formulaic and a prime example of a Hollywood production relying too much on the charisma of its two stars while failing to supply them with material that is fresh or original.