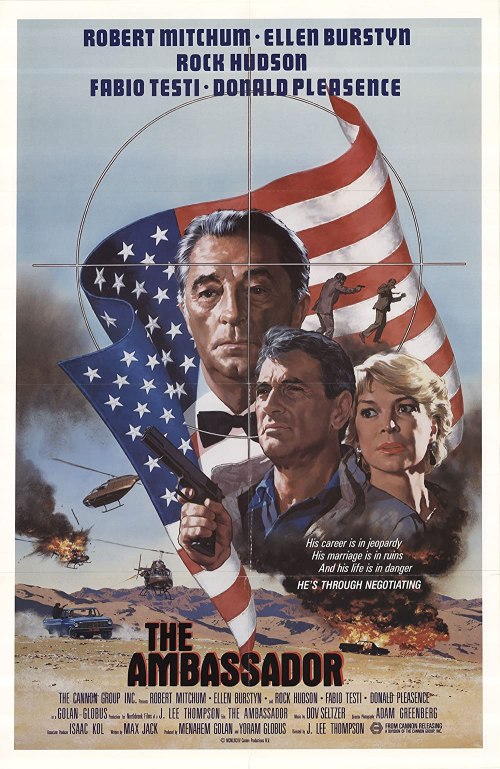 Peter (Robert Mitchum) is a US Ambassador to Israel who has an idealistic view on how to find peace in the Middle East by bringing together young Jews and Muslims who he hopes will work together for middle ground solutions. Not everyone including Peter’s own security agent Frank (Rock Hudson) thinks this is realistic. Peter’s wife Alex (Ellen Burstyn) feels ignored by her husband and falls into the arms of a much younger man named Hashimi (Fabio Testi) who just so happens to work for the PLO (Palestine Liberation Organization). Alex’s rendezvous with him are sexual in nature and during one of their meetups they are secretly recorded on film. Peter then gets blackmailed to pay a large sum of money, or risk having the movie broadcast on TV. Peter refuses to comply and orders Frank to find the whereabouts of the blackmailers hoping to retrieve the original print before it can be seen by anyone else.

This was yet another film shot on-location in Israel that was produced by Menahem Golan and his cousin Yoram Globus, who bought the production company known as the Cannon Group during the 70’s and were notorious for producing, and sometimes writing and directing, a lot of slap-dash action flicks that were made in such a quick, assembly line style, that it got them the nicknames of the Go-Go- Boys. This film isn’t as bad as some of those and features tight editing and interesting twists. It was inspired by the 1974 Elmore Leonard novel ’52 Pick-Up’ and Leonard himself was hired to write the screenplay, but after his first two drafts were rejected he walked-out. The only elements of the story that was retained was the sex film blackmail plot, but everything else was changed though 2 years later the Cannon Group produced 52 Pick-Up that starred Roy Scheider and Ann-Margaret that was more faithful to the original book.

Surprisingly the best thing about this version is Hudson and while I’ve been critical about some of his other performances he shines here despite being already quite ill and looking gaunt and not as muscular. The role had originally been offered to Telly Savalas, but due to scheduling conflicts he had to bow out and Hudson was brought in just a week before filming began. Even with his poor health he takes part in most of the action and has a strong presence though reports were that he and Mitchum did not get along and had many arguments throughout the shoot.

Mitchum, who took the role after getting accused of being anti-semitic and a holocaust denier, is wonderful despite his age and face that has a very tired and worn-out look. Burstyn is excellent too and I was genuinely shocked at her nude scene, no body double here, and at age 51 still looked great doing it.

The film’s ending had me rolling-my-eyes a bit with the way it’s able to bring together these Jewish and Muslin students at a remote location and somehow get them to see eye-to-eye on things, which seemed too easy and romanticized. The proceeding bloodbath did take me by surprise though having Mitchum conveniently leave the scene and is therefore not a part of the carnage that kills everybody else seemed like it would come-off as suspicious to others. The viewer knows he had no idea of the pending massacre, but the other characters don’t and having him quietly leave just before the shooting commenced would make some believe that he had something to do with it, or maybe even set-up the students to get killed and thus be despised by the other people at the end instead of considered a visionary hero like he is.