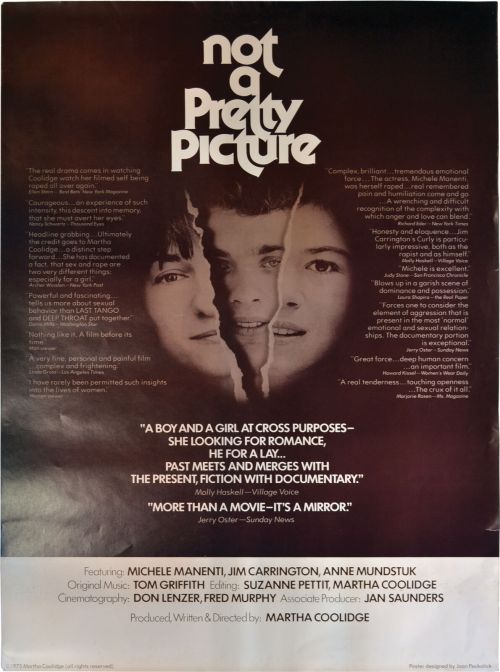 While Martha Coolidge is known today for having directed such 80’s classics as Valley Girl and Joy of Sex she started her career in the 70’s doing documentaries mainly about high school students. After having done three of those she decided to do one that was more personal and dealt with a real-life incident that occurred to her when she was 16 when she got raped on a date with a college student who was 20. While she went about casting the actress to play her as a teen she was shocked to learn that the actress, Michele Manenti, had a similar experience. The film then weaves between reenactments of the date rape and the situations that lead up to it as well as the aftermath. There’s also interviews with the cast members who talk about the emotions they go through while playing the characters including Jim Carrington, who plays the rapist named Curly, who confesses that he thought women secretly wanted to be raped due to his belief that they fantasize about it.

What I got out of the film and enjoyed the most was looking at the acting process and how the performers used elements of their own experiences to help shape the characters that they play. I was genuinely surprised that only one of the cast members, Amy Wright who has a small role as Cindy, ever went on to do another movie. The two stars, who I felt were both outstanding, never acted in anything at least film or TV wise even though I felt they should’ve had long careers. I realize that the acting profession is a very competitive business and what may seem like the cream-of-the-crop in college may not be able to rise to the top in the real-world, but it still seemed sad that they weren’t able to do more, or at least more in front of the camera. It’s also surprising how non-dated this is. The conversations they have both about dating and acting is something that could’ve easily been shot today and just as topical. If it weren’t for them openly smoking indoors in a public setting, which is a major no-no now, you would never have known this was done in the 70’s.

While the conversations that Coolidge has with the cast proves to be insightful the reenactments aren’t as compelling. The scene involving the conversations that the four friends have inside a car has some interesting points, but it goes on too long and gets static. The aftermath where Martha is ridiculed by the other girls at her school and called a ‘whore’ because of the rumors that Curly spreads stating that she was a ‘willing participant’ and the stressful moments she has when she doesn’t get her period and fears she may be pregnant are quite dramatic, but the most important scene, the rape itself, gets botched. All the other recreated scenes where done as if in real-time and with sets that replicated the era, which was 1962, but with the rape it’s staged as a rehearsal with Martha and the other stagehands clearly in view as it occurs and Coolidge constantly stops the action to have them redo the scene several times in order to get it right, but this takes the viewer out of the moment and mutes the emotional impact. In hindsight I think they should’ve done the entire recreation, both the rape and what lead up to it as well as the aftermath, first and then went to the behind-the-scenes footage afterwards instead of inter-cutting it, which may have been novel for the time, but eventually gets off-putting.

The film’s focus was apparently intended to be on Martha and her reactions at seeing her own rape get played-out as the camera keeps panning back to her face as she watches the actors perform it and then at the end she describes her feelings in a emotional way. While I’m sure this was a tough thing for her to do I still felt it would’ve been more encompassing to have it about all the other women, including the actress in this film, that this has happened to and how men in that time period were able to get away with it and never had to be accountable. That to me was more disturbing and the film ends up missing that point, or not hitting-it-home hard enough, and thus isn’t as strong, or ground-breaking as it could’ve been.