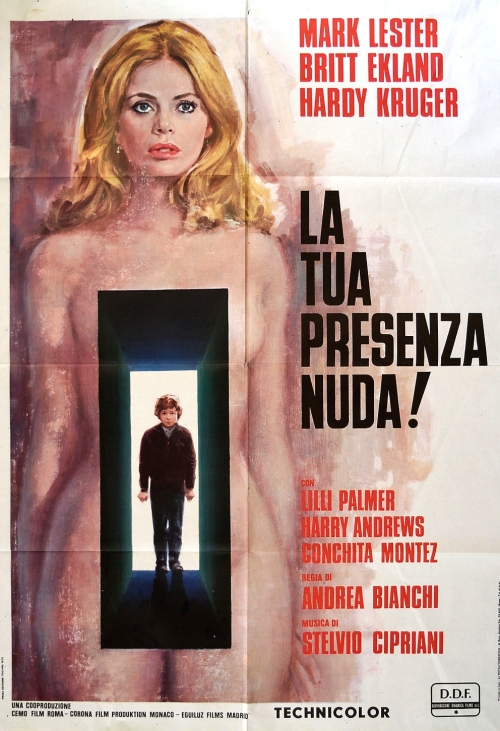 4-Word Review: Child could be killer.

Elise (Britt Ekland) marries wealthy author Paul (Hardy Kruger) and then after the nuptials comes into contact with his 12-year-old son Marcus (Mark Lester) still grieving over the death of his mother 6 months earlier. Elise had the understanding that the mother, who died from drowning in her bathtub, was accidental, but as she gets to know Marcus she suspects that he may have had something to do with it. She then speaks to his school’s headmaster (Harry Andrews) and learns that Marcus has been having disciplinary issues including that of torturing and killing animals. When Elise tells Paul of her suspicions he refuses to believe it, which pits her against both the father and boy.

While the story may have intriguing elements, though it does sound too much like The Bad Seed, the execution is poor. It starts out right away with Elise meeting Marcus, no backstory scenes showing how Elise met Paul are shown, and right away he acts weird and creepy. There’s no nuance or layers to the story, just one long ‘is he a killer, or not’ scenario that ends up being highly talky with no real thrills. The producers, apparently realizing the proceedings needed some spicing up, hired Andrea Bianchi to come in and add some sexually tinged moments including a scene where a nude Lester, sitting in a bath tub, begins fondling Britt’s breasts, who is sitting outside the tub fully clothed. If that wasn’t shocking enough there’s another scene later where she strips fully naked in front of him, but neither of these moments, as sleazy as they are, makes this otherwise tired and placid plot any more intriguing.

The film’s only real selling point is to see child star Lester playing against type. He shot to fame in the starring role in Oliver!, but all of his roles after that couldn’t capitalize on his talents and like with this one were weak and pedestrian that didn’t give him much to do. Watching him play an evil kid, instead of the angelic lad like we’re used to seeing, is interesting to some extent and he does it surprisingly well, but he’s not in it enough.

As for Britt she’s quite beautiful and the camera focuses on her lovingly, and the male viewers certainly won’t mind her nude scenes of which there are plenty, but her character is poorly fleshed-out. It’s hard to understand why she married Paul as he treats her in a callous way and clearly favors the kid over her, so why stay in a relationship if she’s just going to be the spare tire especially with a psycho kid that’s just going to put her life more and more in danger? Any sensible person would pack-up and leave and the fact that she chooses to stay in such a bad and uncomfortable situation makes her seem as nutty as the rest.

Things pick-up during the final 10-minutes which gets filled with a lot of wild imagery though some of this should’ve been sprinkled though out the film, which is too cardboard otherwise. The final twist is a bit of a surprise, but the whole thing could’ve been better paced. Everything hinges too much on the provocative overtones while the characters are one-dimensional and fail to resonate and thus causing the viewer to remain pretty much detached emotionally from everything that goes on and the twists that do occur fail to deliver any punch.