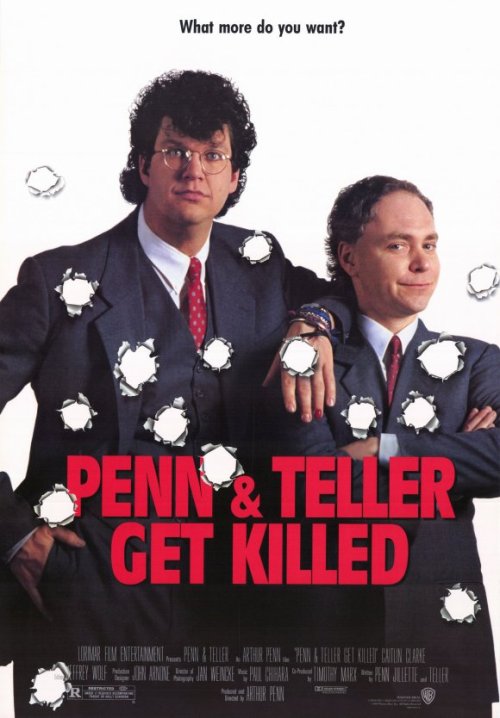 During an interview segment on a nationally televised talk show magician Penn Jillette jokes that it would be interesting to have someone out to kill him. After the show is over strange things begin to occur, but he initially thinks its practical jokes done by his partner Teller. Eventually he becomes aware that someone really is after him who even switches his identity so that he resembles Jillette. The two lay low and even hire an attractive lady cop (Caitlin Clarke) to protect them, but things are never quite as they seem in a film that features one crazy twist after another.

For the most part the film works well despite an unconventional structure that may take a while for some viewers to get used to. The script was written by the two stars and I enjoyed the surreal tone and the sort of mind games it plays with the viewer as one is never quite sure what’s real and what isn’t. The humor is offbeat and funny. I enjoyed their opening act that they do while hanging upside down and how the killer (David Patrick Kelly) tries to reenact it at the end of the film while using himself in Penn’s place. The segment where Teller keeps throwing coins at a man inside a casino was my favorite and I also got a kick out of Penn’s conversation with Teller inside a taxi cab after he is stabbed.

Penn seems like a natural in front of the camera and just like with their stage act does all the talking. Teller though gets a lot of screen time and is surprisingly engaging despite his silence. He finally does speak at the end, which I didn’t like as it broke the mystique of the character and really wasn’t all that clever or amusing. The late Caitlin Clarke gives solid support in the dual role as Penn’s girlfriend and the tough talking Officer McNamara. If you look closely you will also briefly spot Jon Cryer as a frat boy, Tom Sizemore as a mugger and famous atheist James Randi as the ‘3rd rope holder’.

The only real issue that I had with the film is the ending in which all the main characters end up dying either by being shot or committing suicide. I’m sure this may have seemed clever on paper, but it comes off as maudlin and overdone as well as hurting the film’s otherwise playful tone. I also didn’t get why the two characters after having been shot didn’t have bullet holes in their bodies or any type of blood coming out of them. These guys use blood quite liberally in their stage act and it gets used in other parts of the film, so why not have it when it really counts at the end? The female character kills herself by jumping out the window and yet in the very next shot two men are seen walking on the sidewalk just outside of the apartment, but there’s no dead body on the ground, which doesn’t make sense. Penn’s closing narration helps save it a little, but the segment still seems like they wrote themselves into a hole that they couldn’t get out of.