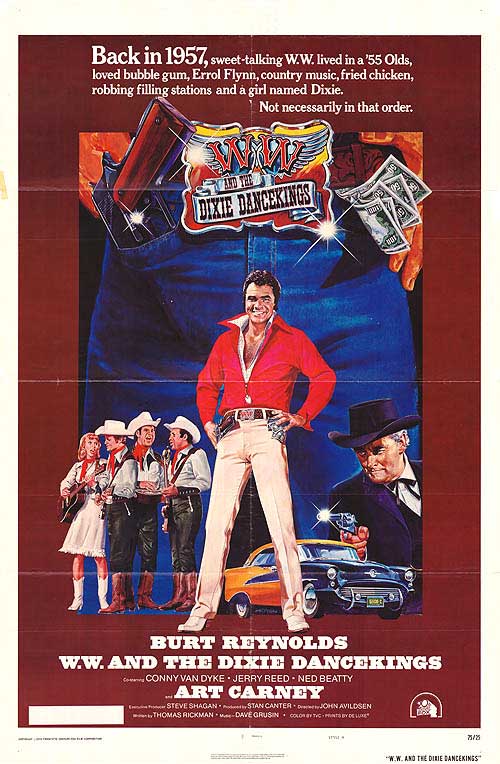 Burt Reynolds plays a good-natured, fun-loving conman who travels the south robbing gas stations as well as conning anyone out of their money in any way he can. He comes into contact with the Dixie Dancekings a struggling country band trying to make it big. W.W. initially sees this as another con-game by pretending to be a big time manager, who can use his influence to bring them to Nashville and send them straight to the top, but eventually he takes a liking to them and them to him and they begin working together to make it big while robbing banks along the way.

The film  is  fun and breezy and quite entertaining at the start. Reynolds’ charm practically propels the thing the whole way and manages to almost make up for its other shortcomings. His glib non sequiturs and boyish grin are on full display making this one of his better comical vehicles. I also loved the creative scene transitions and the playful digs at southern culture. It all comes to a head near the midway point when the group robs a bank with Polly Holliday playing the teller that makes great use of its cartoonish props and overblown action.

Unfortunately Thomas Rickman’s script fails to introduce any type of third act. The story coasts too much on its playful humor until it becomes old and tiring. There is not enough momentum or conflict and no discernable tension at all. The band members have no individual personalities and come off like faceless lemmings that are there to support Reynolds’ spotlight and nothing more.  Art Carney has a few interesting moments cast in an atypical role of the heavy in this case a police detective who is also a religious zealot that tracks the group down, but the dumb way that their final confrontation gets resolved is dull and disappointing.

It’s great to see country singer Jerry Reed making is acting film debut as he and Reynolds  would later go on to star in three more films together, but his character is not given enough to do, which ultimately makes is presence pointless.  Conny Van Dyke gets cast as the female lead, but shows little pizazz. The part was originally offered to Dolly Parton who would’ve been far superior, but she unfortunately turned it down.

John G. Avildsen’s direction is at times creative, but the plot and characters needed more layers as it all regrettably adds up to being nothing more than forgettable fluff.