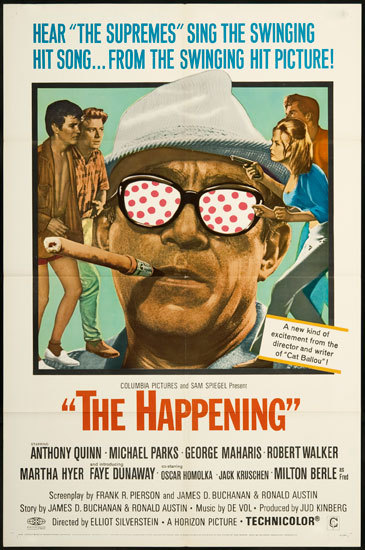 4-Word Review: Kidnap him for kicks.

After a night of partying a group of hippies wake up the next morning hung over. Sandy (Faye Dunaway) and Sureshot (Michael Parks) are two strangers that find that they’ve slept together outside for the night and slowly become acquainted. To escape a police raid that is rounding up the drunken partiers and arresting them for vagrancy they hop onto a nearby boat with two other men that they’ve just met Taurus (George Maharis) and Herby (Robert Walker Jr.). They happily go along the lake until some neighborhood kids who are dressed in army gear shoot at them with their toy guns. Taurus doesn’t appreciate this and docks the boat and chases them into their house. Inside is the boy’s father Roc Delmonico (Anthony Quinn) who is a former Mafia Kingpin. He thinks these four strangers are aware of his past and there to kidnap him. The group decides to play along with the ruse hoping to get some money from the ransom and also because they are just bored and looking for some kicks.

The set-up has to be one of the flimsiest I have ever seen and the fact that it took four writers to come up with something that is full of holes and ludicrous is all the more confounding.  The concept seems like something that never got past the first draft and very poorly thought out by everyone involved. The idea that four strangers who have known each other for just a few minutes could get together and kidnap someone that they don’t know on a mere lark is ridiculous. I would think a former kingpin would be better prepared for something like this and have a back-up plan instead of passively and stupidly falling into the kid’s clutches with no idea of what to do. The story would have been far stronger had this been a planned crime.

The film’s overall vapid nature is shocking when you realize that is was done on a good budget by a major studio and top director Elliot Silverstein making me wonder if anyone even cared or thought about what they were making, or simply more interested in getting into the mod mood of the times. The filmmakers portray the younger generation as being one-dimensional thrill seekers with no real or discernible personalities and in the process creates characters that are boring, unrealistic, and uninteresting. The attempts at hipness are shallow, flat, and ultimately annoying.

Despite the low plausibility the movie is slickly done making for periods of fluffy entertainment. Case in point is when the kids have their car pulled over by a policeman (Eugene Roche) when they go through a red-light and carrying Roc tied up in the trunk. In an attempt to create a ‘diversion’ Sureshot decides to get out of the car with his hands up in the air. When the cop tells him to put his hands down he refuses, which then somehow makes all the other cars on the road crash into each other. Yes, it is fun to see a big pile-up, but believing that something like that could happen over something so silly is pushing things too much to the extreme like with a lot of things in this movie.

Things improve during the second half when Roc with the help of the kids turns the tables on everyone he knows after finding out that no one is willing to pay for his ransom. The scene where they tear up his house is kind of funky despite the fact that all the furniture they smash up looks like obvious stage props. Unfortunately the ending is as weak as the beginning and offers no pay off, which most likely will make most viewers feel like they’ve wasted an hour and 45 minutes of their time.

Quinn is good and gives the script and character a lot more energy and heart than it deserves. Dunaway, in her film debut, is hot and plays the part of an immoral lady looking for cheap thrills even when she knows better quite well. Walker Jr. is good simply because he plays the only character that has any type of believability, but unfortunately he is not on enough to be completely effective. Maharis who is best known for his excellent work as Buz Murdock in the classic TV-show ‘Route 66’ is solid as the volatile and slightly unhinged member of the group.

Oskar Homolka has a few memorable moments as an aging crime boss. One scene has him in a steam room along with his henchman wrapped tightly in towels and looking like giant carrots while another segment shows him at a poolside surrounded by a bevy of beautiful bikini clad women, which like the first scene, is visually funny.

The Supremes sing the film’s theme song, which became a top ten hit, but it doesn’t get played until the closing credits and even then not in its entirety.