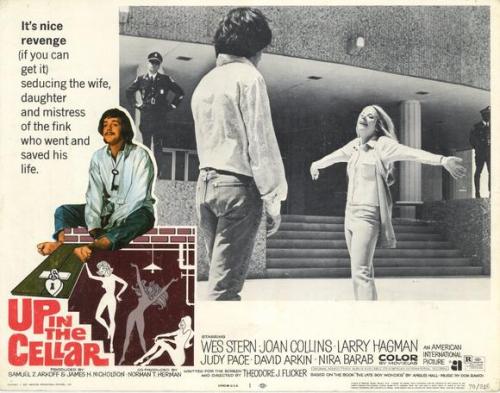 This is a variation of the film Three in the Attic and for a time was called Three in the Cellar to try and capitalize off of the success of that one. Ironically both films starred Judy Pace. In this one Colin Slade (Wes Stern) is a nerdy college student who loses his scholarship to a computer glitch. When he can’t get college president Maurice Chamber (Larry Hagman) to help him, he decides to get revenge by seducing both his wife (Joan Collins) and daughter (Catlin Adams).

The production proudly proclaims to be filmed on location in New Mexico, which is obvious from the start and nothing to really boast about since it hurts the film as a whole. Shot in wintertime it’s dusty, desolate landscape leaves the viewer with a cold, lonely feeling, which configures poorly with a story that is supposed to be lighthearted and whimsical. The big, modern cement buildings used as the campus looks like they would be better suited for a corporation than a student body. The students themselves, or what little you see of them, look all suspiciously over the age of 24.

Director Theodore J. Flicker nicely camouflages the fact that this is a very low budget production. His script is compact and well-paced. He frames and cuts his shots so you don’t notice how lacking in personality or energy it really is. Yet he also shows little connection to the student uprisings that dominated the campuses of that era and seems to view it as a sort of silly amusement. He keeps the film at this tone the whole time and thus makes it as silly and forgettable as the characters and situations he tries to satirize

Hagman comes off best. He plays it with a fun mixture of traits from two of his best known characters. He has J.R. Ewing’s arrogance coupled with Major Nelson’s frantic anxiety.

The film also has two fun and unique scenes. One has Hagman climbing up an actual radio tower to save Stern who is threatening to jump off. The second one has a pornographic movie shown to a group of unsuspecting and shocked senior citizens