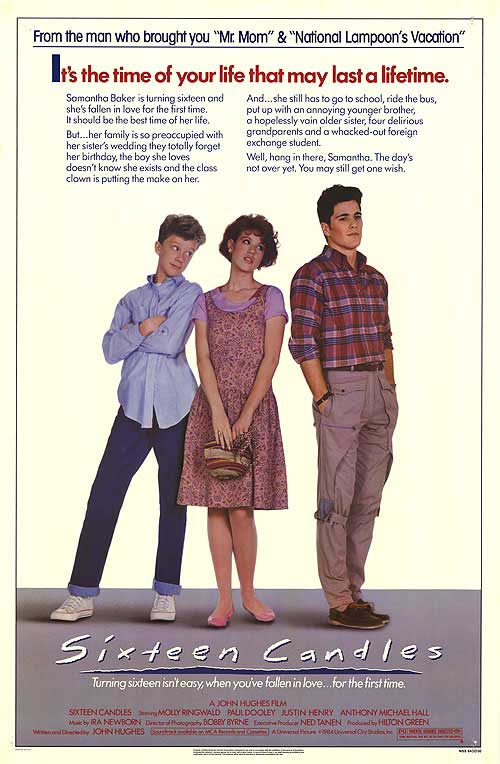 4-Word Review: He has her panties

The 80’s may eventually become known as decade of the teen movie. There were so many and 98% of them were crude, moronic, and forgettable. However this disarming film, a product of John Hughes, is a winner. It’s a simple story that manages to bring out the universal truths of that age in a seamless manner. Its best asset is its ability to show how all those things that are considered insignificant to others is a big deal to teens. The film may be best suited for adults who can look back on that period with a mature perspective and a wry sense of wit as well as nostalgic to those who were adolescents when the film came out.

The film stands out from the rest in other ways too. First is the fact that the majority of the cast actually look the age they are playing and resemble the physical awkwardness. Other teen movies always seem to have pretty models and chiseled faced guys who look older than they should. The kids here also don’t have that annoying smugness. The filmmakers approach it with the idea that behind all that crudeness it is still an innocent time. It’s also nice to see parents and teens getting along and not constantly at odds. The late night talk between Ringwald and her father (Paul Dooley) is quite touching.

The film has some really funny moments. The destruction of a nice suburban home during a wild teen party is fun. Hall’s ‘official’ unveiling of Ringwald’s panties to a group of awed freshman is also memorable.

Ringwald is perfect in the starring role as she was sixteen at the time and seems to embody the character. You hardly see the acting. Hall was also a good choice as the male geek. He certainly has the scrawny physique of a typical freshman as well as the outrageous persona that he creates to help compensate for it. It is also interesting that at times he shows some mature sensibilities, which is a good example of how adolescence can be a mixture of different traits. The adult cast is great as well especially the veteran character actors who play the grandparents.

This film borders on being a minor classic even though there are a few drawbacks. One is the ending sequence where Ringwald’s older sister, who is also the bride, starts to behave erratically, which becomes comic overkill. The picture worked better when it stuck with Ringwald and her high school experiences exclusively. The film also has a few too many neat wrap-ups. The worst being when the hottest girl in the senior class falls in love with Hall, which was too much of a stretch. The music score gets heavy-handed at times especially when it’s used to accentuate a comic moment. There are also a few too many unnecessary sound effects.

John and Joan Cusack can be seen in small roles with John looking very young. Jami Gertz can be seen quickly as a drunken party guest. Also Blanche Baker, who plays Ringwald’s older sister, is the real life daughter of actress Carroll Baker.