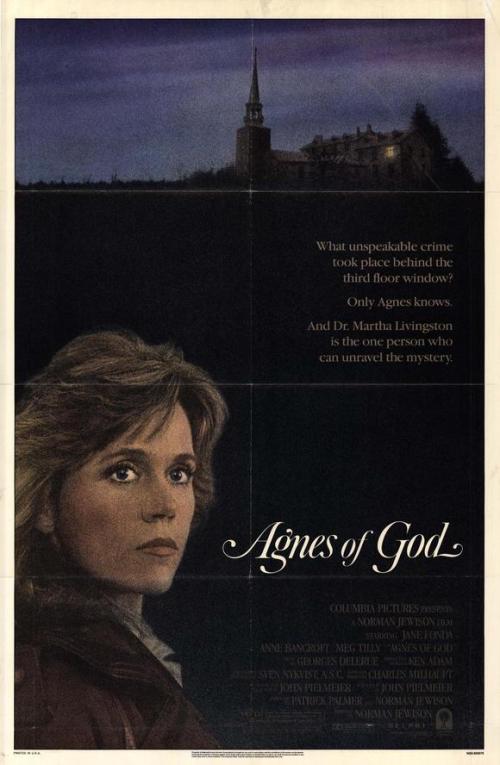 Sister Agnes (Meg Tilly) is a young nun found in a convent to have given birth to a baby who then dies. Martha Livingston (Jane Fonda) is the court appointed psychiatrist brought in to investigate the case, but as the investigation ensues it only seems to unearth more and more perplexing twists.

The theology is slight and the film, which is based on the Broadway play by John Pielmeier, approaches the subject matter in a very matter of fact way. It has the mindset that the majority of the viewers are non- religious or disgruntled ex-Catholics and portrays the church as a stubborn, age old institution that is slowly losing touch with our more modern sensibilities.

Yet, refreshingly, it also doesn’t try to tear down the church with every chance it gets. There is a certain level of respect and objectivity. The mother superior (Anne Bancroft) is shown to be very human and multi-faceted. She and Fonda make interesting adversaries. Their love-hate relationship is both interesting and enlightening. There is even a rare scene showing an excited young woman being inducted into the sisterhood as her proud family looks on.

Fonda, with her liberated modern woman persona, seems a very obvious choice to play the no-nonsense psychiatrist. She approaches the role with conviction, but her constant chain smoking seems affected and her emotionalism overwrought. I still say she is better suited for comedy like in Cat Ballou and Nine to Five.

Bancroft is solid as usual. Yet it’s Tilly that is really impressive. She portrays the innocence of her character with an incredible clarity and it’s almost astounding.

The mystery unravels well and keeps you intrigued. Yet the ambiguous conclusion is a bit disappointing. The drama side fares better. It poses a few good insights and ends with an interesting perspective. The film is well done on all levels even though outside of Tilly’s compelling performance there is really nothing that memorable or distinctive about it.