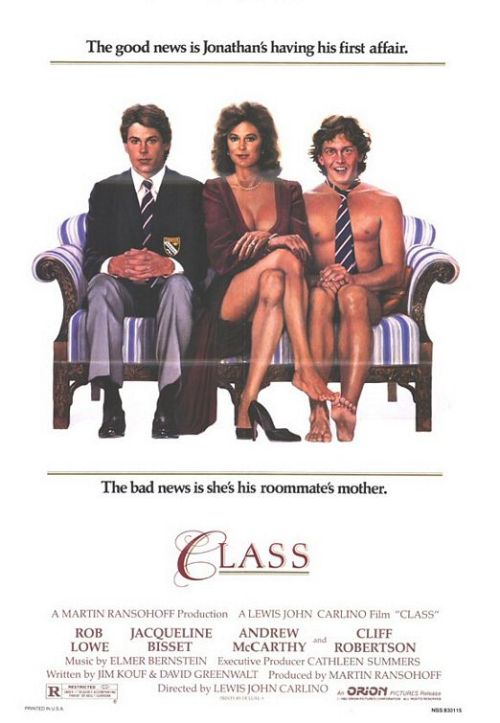 Jonathan (Andrew McCarthy) is a new student at a prep school who rooms with Skip (Rob Lowe) and almost immediately gets mocked by the other students for being geeky. To help bolster Jonathan’s reputation Skip has him sent off to Chicago where he can meet-up with a woman, have sex with her, and then bring back her panties as a souvenir. Jonathan does that when he hooks-up with the beautiful middle-aged Ellen (Jacqueline Bisset) whom he meets at a bar and the two begin a relationship. The problem is that Ellen is also Skip’s mother.

The film was written and directed by Lewis John Carlino who had done several highly acclaimed films previously both as a writer and director so having him churn out what amounts to being just another crude ‘80s teen T&A flick is genuinely shocking. My belief is that Carlino wanted to do something that had a little more depth to it, but due to the success of movies like Porky’s the studio pressured him to incorporate raunchy humor, which creates an awkward narrative that jumps precariously from broad comedy to clumsy drama.

The film’s low point comes when Virginia Madsen, in her film debut, gets her blouse torn off and has her breast exposed that has nothing to do with the main plot and just a shameless excuse to throw in some nudity. Madsen has described her experience on this film as being unpleasant and if anything despite some ‘serious’ moments later on this scene really cements the movie as being mindless lowbrow tripe at its worst.

My biggest beef though was with Bisset’s character. It’s never explained why this sexy middle-aged woman would become attracted to a boyish guy that was young enough to be her son. Just saying she was in an unhappy marriage wasn’t enough. She could’ve attracted many eligible men that were her age, so why does she end up going to bed with a teenager that looks like he isn’t even old enough to shave?

Bisset complained in interviews that the film cut out many crucial scenes that would’ve given her character’s actions more subtext. One included having Lowe visit her after she checks herself into a hospital. This scene was needed as the film essentially has her ‘disappear’ and only mentions in passing where she’s gone while seeing a scene with Lowe visiting her would’ve given the characters and movie better closure.

I also thought it was weird that Lowe and McCarthy continue to room together even after the awful revelation of the affair comes to light. I would think that the awkwardness of the situation would have both boys clamoring to be transferred to a different dorm room. They also end up getting into a physical altercation, which gets pretty extended and one of the film’s best moments, but I sided with Lowe, which I’m not sure was the filmmaker’s intention, as I felt McCarthy deserved to get his ass kicked since he continued to have sex with Bisset even after he knew she was Lowe’s mother.

The film only works when Lowe and McCarthy are together and in fact Lowe’s engaging performance is a highlight, so a better scenario would’ve had both boys going to Chicago for a road trip and to get laid. At a bar they’d meet an attractive middle-aged woman and bring her back to a hotel room for a threesome. Afterwards both boys would compete for her affections only to later realize that she was the wife of the principal of their school. This situation would’ve allowed for more consistent comedy while not seeming like a poor rip-off of Summer of ’42 and The Graduate, which is essentially what this movie becomes.

The plot, as dumb as it is, can’t even sustain the film’s entire runtime as the third act consists of Stuart Margolin  investigating students cheating on their SAT’s that goes nowhere and put in solely as filler. Overall the film is a pointless excursion and worth seeing only if you’re into Bisset or for catching John Cusack, Lolita Davidovich, or Virginia Madsen in their film debuts.