Gilbert Rolfe (Ron Silver) is a grown man trying to hold down a full-time job, maintaining a marriage with Lisa (Carrie Fisher), and also keeping his social activist mother Estelle (Anne Bancroft) out of trouble. He soon learns though that his mother is dying of a brain tumor and her last wish is being able to meet Greta Garbo, the elusive movie star, in person. Gilbert doesn’t know how he’ll be able to find her, but spends most of his time diligently trying, which causes problems with both his job and marriage.

For the first hour the concept of trying to mix-in fable-like storyline with the bleak realities of day-to-day living actually works. Silver deserves top credit for making what could’ve been a very bland part as a schmuck that wasn’t too interesting or funny into an engaging character that the viewer feels more and more empathetic towards as the movie progresses. The sub-storyline though dealing with the breakup of his marriage and his subsequent relationship with his co-worker Catherine Hicks, who came across as being too kooky to be believable, I didn’t find necessary.

Bancroft gives a compelling performance as well and is particularly funny in the scene where she lectures a group of male construction workers in regards to the catcalls they give to the women walking past them. I found it disappointing though that the side-story dealing with her motivating one of the nurses, played by Antonia Rey, to demand that her union give them a higher pay rate at their next bargaining session was never played-out to its full conclusion. Having her ex-husband, played by Steven Hill, arrive at the hospital for a visit, but then not hearing them get into any type of conversation I found frustrating as well. There’s also a discussion that she has with Gilbert about how the cancer treatment will cause her hair to full out, but then that never happens, so why bring up something if it doesn’t ultimately connect with the plot?

The film’s biggest downfall though occurs at the end when a half-hearted attempt to use a double, played by Betty Comden, in place of the real Garbo. Apparently some efforts where made by the producers to see if Garbo would be willing to make a cameo appearance, but they were never able to make direct contact with her, so if a multi-million dollar film studio can’t adequately locate her how is some ordinary schmuck going to do it?

The way Gilbert is finally able to meet her, which ends up being at an outdoor flea market no less, is rather cheesy. He’s also only able to ‘recognize’ her from the back of her head, which is all the viewer pretty much ever gets to see too, so how would anyone know that was the right person just from that? The excuse he gives her to get her to come along with him to the hospital to see his dying mother would’ve been considered by most people in the same situation as just an excuse from a stalking fan to get her into his car, so he could kidnap her . Many celebrities must deal with obsessive fans all the time so how could anyone blame her for flatly turning him down, which is what she should’ve done and most likely would’ve occurred in reality.

Once Garbo does arrive at the hospital it’s Bancroft that does all of the talking making Garbo seem like a transparent ghost and not a real person. The film would’ve worked better had Gilbert given up on his attempts to find her and just hired an actress to pretend to be her, just like the movie itself ended up doing. This might not have satisfied everybody, but it at least it would’ve avoided becoming as hokey as it does. 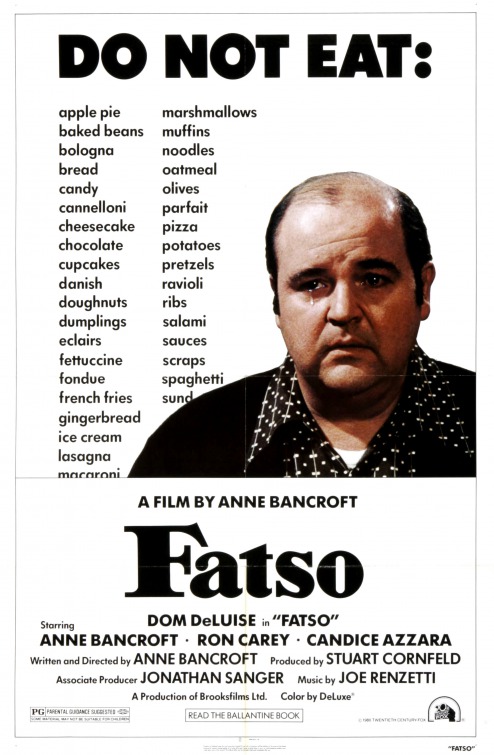 When her cousin dies at the age of 39 from being overweight Antoinette (Anne Bancroft) puts pressure on her brother Dom (Dom DeLuise) to work on losing some weight of his own. Dom tries but his lifelong obsession with food cannot be curbed. He ties a chain around the cupboards in his kitchen so he can’t get at the food inside and then has his brother Frankie (Ron Carey) hide the key. He even joins a club called the Chubby Checkers who are on-call at all hours to come to his home and counsel him should his willpower falter and yet it does no good until he meets Lydi (Candice Azzara) and her love for him helps him find strength.

This was Bancroft’s one-and-only foray behind the camera and unfortunately it’s a jumbled misguided mess that seems like a comedy at some points only to quickly turnover into a hard wrought drama the next. I enjoyed the recreation of the extended Italian family living in the New York, which was right on-target particularly the way they lean on each other in times of need while also vigorously fighting amongst themselves at other points. I also appreciated how religion is shown playing an important part in their lives particularly the crosses and pictures of Christ seen in almost every room even the bathroom. I’m not a religious person myself, but the film still helps the viewer understand and appreciate how spirituality can play a vital role to those whose lives seem empty and challenging otherwise.

The comical moments, or at least when they manage to randomly pop-up, aren’t bad either with the scene involving the two brothers attacking each other at different times while using the same knife being the best. DeLuise gives an excellent and highly underrated performance. The scene where he reads greeting cards out loud while constantly breaking into sobs is hilarious as is his first awkward meeting with Lydia. Unfortunately Dom became much more rotund later in his life and by comparison seems almost thin here.

The film gives the viewer a nice, sensitive portal to how tough fighting the urge to eat must be for those who are fat and manages to nicely expose the human side of the issue without ever mocking them. Bancroft does her emotional drama bit, from which she is best known for, quite well, but I felt the material really didn’t call for it and it becomes almost over-the-top. The pacing is also off and the story is never compelling despite the earnest efforts of its cast. It all would’ve played out better had it stuck firmly to the comical angle and the fact that it doesn’t really hurts it.

Sister Agnes (Meg Tilly) is a young nun found in a convent to have given birth to a baby who then dies. Martha Livingston (Jane Fonda) is the court appointed psychiatrist brought in to investigate the case, but as the investigation ensues it only seems to unearth more and more perplexing twists.

The theology is slight and the film, which is based on the Broadway play by John Pielmeier, approaches the subject matter in a very matter of fact way. It has the mindset that the majority of the viewers are non- religious or disgruntled ex-Catholics and portrays the church as a stubborn, age old institution that is slowly losing touch with our more modern sensibilities.

Yet, refreshingly, it also doesn’t try to tear down the church with every chance it gets. There is a certain level of respect and objectivity. The mother superior (Anne Bancroft) is shown to be very human and multi-faceted. She and Fonda make interesting adversaries. Their love-hate relationship is both interesting and enlightening. There is even a rare scene showing an excited young woman being inducted into the sisterhood as her proud family looks on.

Fonda, with her liberated modern woman persona, seems a very obvious choice to play the no-nonsense psychiatrist. She approaches the role with conviction, but her constant chain smoking seems affected and her emotionalism overwrought. I still say she is better suited for comedy like in Cat Ballou and Nine to Five.

Bancroft is solid as usual. Yet it’s Tilly that is really impressive. She portrays the innocence of her character with an incredible clarity and it’s almost astounding.

The mystery unravels well and keeps you intrigued. Yet the ambiguous conclusion is a bit disappointing. The drama side fares better. It poses a few good insights and ends with an interesting perspective. The film is well done on all levels even though outside of Tilly’s compelling performance there is really nothing that memorable or distinctive about it.