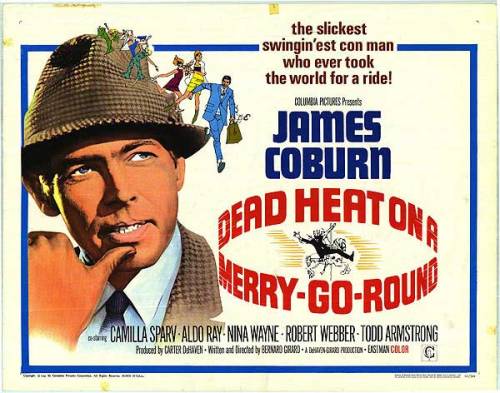 4-Word Review: Robbery at an airport.

Eli Kotch (James Coburn) manages to con his way out of jail by playing on the affections of his pretty jailhouse psychiatrist (Marian McCargo). His plans are to rob the bank at the Los Angeles International Airport while they are hosting the arrival of a Soviet Premier, which he figures will sufficiently keep the security personal distracted. The blueprint for the bank will cost him a hefty sum, so to help finance it he travels across the country seducing rich women and making off with their expensive possessions and money. Once the blueprint is purchased he assembles his men and executes the daring and elaborate scheme.

The film, which was written and directed by Bernard Girard, is by all means slick although it goes a bit overboard. The first hour is hard to get into. The filmmakers seem intent to keep the viewer guessing about the Kotch’s motives and intricate plans as the rest of the characters. There is so much cutting back and forth between scenes in L.A. and Boston as well as all the lady victims that Kotch finds that it becomes confusing and off-putting. Everything comes off too easily for our protagonist. I suppose that is the intended charm, but a few hiccups here and there to their plans might have offered more tension and reality.

He also beds too many women almost like he is some sort of modern day Don Juan. Having even just one of them slap him across the face when he makes his advances instead of just robotically disrobing and hopping between the sheets with him would’ve been funny. If this film were to be remade the women characters would have to be updated as here they are simply caricatures of a bygone era.

Camilla Sparv’s character and the way Eli treats here was a particular problem with me. Sparv looks drop-dead gorgeous to the point of being breathtaking. Most men would feel blessed at having such a beautiful woman fall in-love with them, but Eli takes it all for granted. He callously lies to her and uses the genuine feelings she has for him to take advantage of her and use it for his own gain. It gets to the point where Eli starts to come off as a real cad and makes the viewer dislike him. There is a twist at the end involving the Sparv character, but it is not enough. I was really hoping that she would somehow manage to screw-up his plans whether intentional or not, but that doesn’t happen even though it should’ve.

Coburn’s toothy grin and deep laugh manages to carry it and probably no other leading man would’ve been able to pull off this type of part as well. The supporting cast is equally good. Rose Marie is fun in a brief part as an older woman that Eli cons. Severn Darden is effective as the nerdy and smart, but very nervous member of Eli’s group. Nina Wayne is funny as one of Eli’s first female victims, a ditzy blonde filled with very quirky philosophies on just about everything. Yet it is Robert Webber, a very under-rated character actor, who steals the show as the high-strung head of the airport security. You can also spot a young Harrison Ford in a brief bit as a bellhop.

The excellent on-location shooting gives the film an added flair. The shots of the Los Angeles International Airport are good especially the way it captures the iconic and modernistic Theme Building. Images of a wintry Boston during Eli’s jaunts to that city are quite scenic particularly all the tree branches covered with snow.

The film’s final half-hour is captivating and even intense. The editing is excellent and the sheer brazenness of the crime is amusing. There are certain things though that seemed implausible and whether such a plan could be pulled off in real-life is doubtful. Still, if you’re a fan of heist films this should offer two hours of suitably fluffy entertainment, but just don’t think about it too hard.