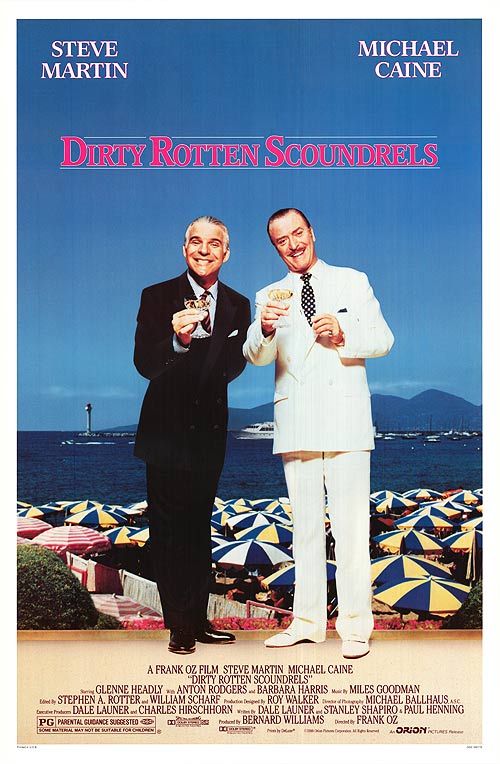 Freddy (Steve Martin) is a small-time con able to trick women into paying for his meals and sometimes even into their beds, but he is nothing compared to Lawrence (Michael Caine). This is a man that lives in luxury all from money that he has duped from rich women. Freddy decides to team up with Lawrence to learn his craft. The two work together for a while with Freddy playing Lawrence’s crazy younger brother, but the two have a falling out and end up becoming rivals instead. They meet Janey Colgate (Glenne Headley) the supposed daughter of a rich soap manufacturer and compete to see who can con her out of $50,000.

This version is far superior to Bedtime Story, which was reviewed yesterday. The pace is snappier and gets into the scenario more quickly. The scenes are consistently amusing and everything is handled at a slick level. The women aren’t all portrayed as naïve idiots like in the first and in certain cases they are just as corrupt and greedy as the two men. The music is bouncy and playful and helps propel the movie along.

Although both films were shot along the French Rivera this one does a better job of capturing the sunny and exotic locale. When Freddy visits Lawrence at his mansion and looks out at his exquisite seaside view and says ‘I want this’ I felt like saying ‘I want it too’.

I wasn’t sure Martin could top Marlon Brando’s performance from the first film, which was the only thing good about it, but he does. It took a little adjusting at first, but Martin takes the reins and in his usual style makes the part his own. His best segment is when he is in jail and can’t remember Lawrence’s name, which makes terrific use of his improvisational skills. The part where he asks to go to the bathroom is a little bit gross, but funny as well.

Caine is excellent is his part and gives the role more panache than David Niven did in the first one. He even puts on an effective German accent during the segment where he pretends to be a famous German psychiatrist. Believe it or not the parts of Freddy and Lawrence were originally intended for Mick Jagger and David Bowie.

Headley is good in her role as well. She has an attractive quality about her that is distinct and natural and avoids the plastic Hollywood starlet image. Her voice borders on being a little nasally, which could have become annoying, but with this type of part it works.

The best thing about this version though is the twist ending, which helps to maintain the slick level throughout the entire duration of the story. In the first version the ending was highly contrived and unimaginative as well as going against the personalities of the characters. Here it hits-the-mark and works as a nice payoff to the rest of the film.

The only critical comment I have about the movie is that it goes on a bit too long. 110 minutes is too extended a runtime for light comedy.