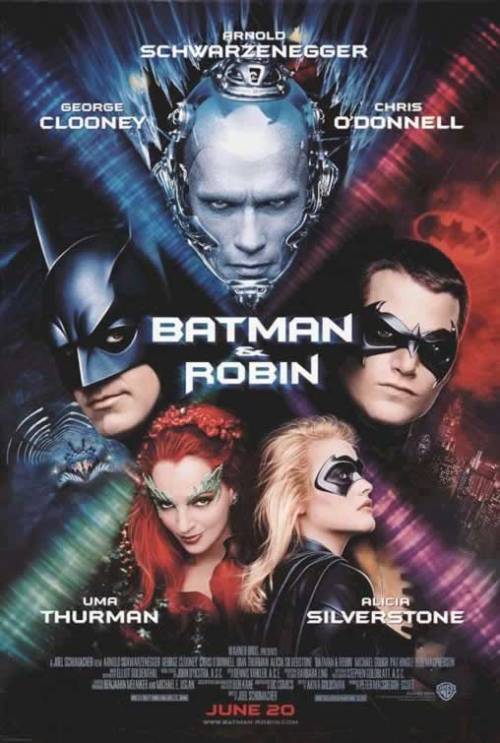 4-Word Review: This is getting bad.

The series has definitely lost its original inspiration and doesn’t resemble anything like the first film. This was supposed to be a whole new direction away from the TV-series and yet now it is not only as campy, but even worse. The characters are just props for one-liners with no real dialogue just cutesy little barbs. Mr. Freeze spews out so many cold clichés that it becomes nauseating. There is also no tension or suspense as the villains are a couple of eccentric clowns with no frightening qualities to speak of.

Thurman as Poison Ivy is good, but it really doesn’t help. The idea of a nerdette turned into sexy siren seems like an extension of the Catwoman character. She has poisonous lips and can kill a man simply by kissing him. The ploy Robin uses to survive this kiss is an idea taken right out of an episode of the old “Get Smart” TV-series.

Gotham is no longer used as a third character and at times only seems like an afterthought. It is missing that unique set design and atmosphere as well as the dark undercurrent. The lighting and color is loud and garish with the overall production values looking cheap. The set for Mr. Freeze’s hideout look dangerously close to the same sets used in the TV-show.

The story is cluttered and nonsensical. It peaks with calamity every other minute and there are way too many loopholes. The editing of the action sequences is too fast and makes it hard to follow and it’s processed with a permeating sense of glibness.

Clooney is by far the best Batman as he is relaxed and poised with just the right amount of wit. O’Donnell seems like he was born to be Robin and their ongoing banter creates a nice added element. However, when shown side by side without their costumes they look more like brothers than father and son, which is the type of relationship that this was supposed to be. A little more gray in Clooney’s hair would have given that needed distinction.

Silverstone is all right, but she actually doesn’t turn into Batgirl until the very end. She has a good one-on-one fight with Poison Ivy, but it should have been played out more. It would have also been nice, like in the TV series, where she worked independently from Batman and didn’t have to share his batcave or necessarily take his orders. Also her background relationship with butler Alfred is completely absurd.

Overall this is silly and strained. The Batman revitalization has hit a brick wall and this is easily the worst of the series.