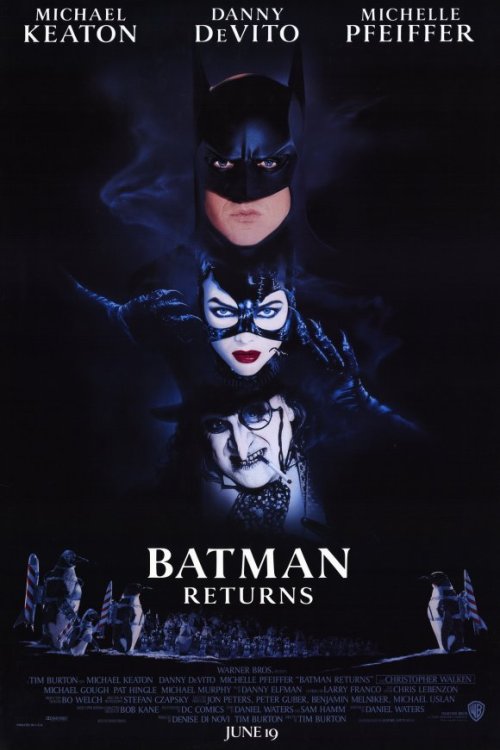 4-Word Review: This version is cool.

Genuinely twisted, marvelously executed superhero tale in this the second and by far the best in the series. This time Batman (Michael Keaton) must battle both Catwoman (Michele Pfeiffer) and The Penguin (Danny DeVito) who is running for mayor.

The big reason I feel that this film works so well is because director Tim Burton continues to use the city of Gotham as the major centerpiece. It’s a consistently gray apocalyptic setting with a surreal element that has its own unique set of rules that correlates well with the story. It also emanates a cold and lonely feeling that creates the desperation and madness that the villains show.

The villains themselves are terrific. The film nicely captures their dark nature and all the components that drive them to it. They are colorful, but still menacing and funny without being silly. Also, unlike a lot of today’s action flicks they are not used merely as props to spew out clever one-liners.

Devito as The Penguin makes one of the better villains. He is physically perfect for the role. He wears some nice ghoulish make-up and is not one-dimensional. We are shown that he was a ‘freak baby’ and how badly he was treated and thus understand his personality. He does get vicious, but in a funny way kind of like the Louie De Palma character he played on the TV-show ‘Taxi’. The only thing that is missing is the Penguin walk that Burgess Meredith had in the 60’s TV series.

Pfeiffer as Catwoman does her part without a fault and yet doesn’t seem completely right for the role. I found it hard to believe that with such a great looking face and figure that she could be overlooked by all the men even if does wear glasses and act nerdy. Also, the sinister cat has always been portrayed as being a black one and therefore the Catwoman character would have been better played by a raven haired actress. Sean Young competed for the role and might have been a better fit as her complexion is darker and her voice deeper. Pfeiffer though is still quite good and her constant dual personalities make her character interesting.

Keaton is the weakest link and continues to seem uncomfortable in his superhero role. Having the boy wonder beside him would have helped.

This feature comes together much better than the first one and has a more complete vision. It is kind of like a Grimm fairy tale, cult comedy, sci-fi, and modern day actioner all rolled into one. There is a good set-up and a nice emphasis on atmosphere. The humor never gets out of hand and is always laced in dark origins. It stays consistently twisted including the finale which features bomb wearing penguins marching into Gotham ready to blow it all up. Lots of fun!