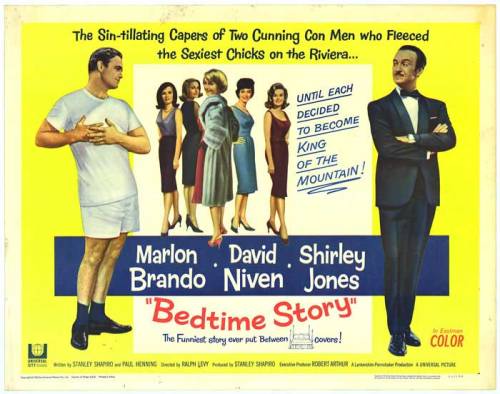 Freddy Benson (Marlon Brando) enjoys conning his way into women’s beds. He uses all sorts of different ruses and has become so good at it he’s made it into a full-time profession. Then he meets Lawrence Jameson (David Niven) and is impressed because not only is Lawrence able to woo them for sex, but he is also able to get into their finances as well. The two work together for a while, but then there is a falling out and they become rivals instead. Along comes Janet Walker (Shirley Jones) a single woman with a supposedly rich father. The two then compete to see which one can con her best.

The movie itself is so-so, but Brando’s performance is excellent. He is far better known for his brooding dramatic performances, but the guy is amazingly engaging here. I loved every scene that he was in and found him to be consistently amusing. I was impressed with how at ease he was in doing comedy and this is a must for all Brando fans as you will see him doing something completely different from anything else he has done. I came away feeling he was perfect for comedy and wishing he had done more of it in his career.

The story though is contrived and formulaic in the worst way. The first hour is particularly tough going as the schemes the two men play are rather lame and something a fifth grader could see through. The women are portrayed as being utter morons and apparently so good-hearted that they will fall for any trick in the book. It would have given it a better balance had a few of them become wise to the men’s antics, but the fact that none of them do makes the whole thing seem horribly stereotyped and insulting to females everywhere. The humor is trite and unsophisticated and it should come as no surprise that the script was written by Paul Henning known for such ‘classics’ as ‘The Beverly Hillbillies’.

If you survive the boring and silly first hour things improve slightly during the second. The antics that Lawrence and Freddy pull on Janet are a little more clever and it is fun to see how each tries to one-up the other. Freddy pretends to be a man stricken to a wheel chair after he becomes traumatized from the rejection of a woman he loved. The only person who can cure him is a famous, but expensive psychiatrist that gets played by Lawrence. Larwrence’s initial examination of Freddy is funny as is the part where Freddy and his wheelchair go wildly out-of-control and crash into a countryside barn.

I was disappointed that there was no twist ending here as I was starting to think there would be and defiantly should have been. Instead it is just another ‘happy’ hollow Hollywood ending that was typical for that era and solidifying this as an empty lightweight exercise that barely deserves any attention at all if not for Brando’s performance.

In 1988 this film was remade as Dirty Rotten Scoundrels that starred Steve Martin and Michael Caine. That film will be reviewed tomorrow.