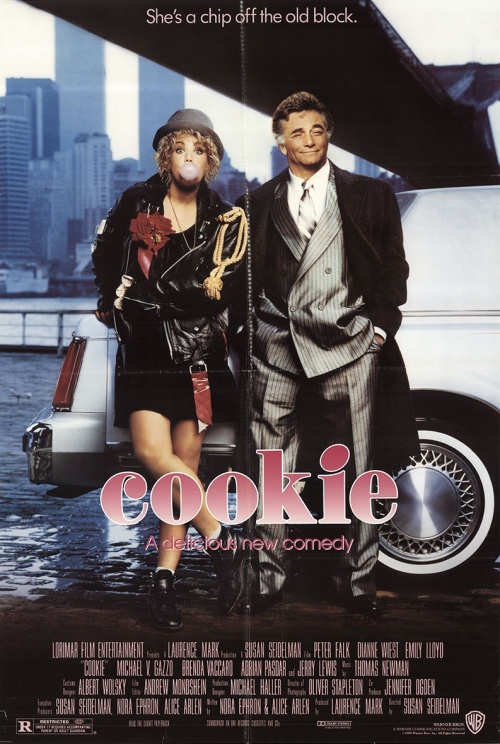 Dino (Peter Falk), a longtime racketeer, gets released from prison after a 13-year sentence. He meets up with his long time crony Carmine (Michael V. Gazz0) only to learn that Carmine sold off his share of the business, but now refuses to give him his entitled proceeds. Dino then plots an elaborate revenge and uses his estranged daughter Cookie (Emily Lloyd) to help him. At first the two don’t get along,but eventually forge a friendship when she proves to be quite resourceful as a getaway driver.

This movie proved to be the start of Lloyd’s career downfall. She burst onto the scene with her acclaimed performance in Wish You Were Here, which had all the critics fawning over her including Roger Ebert who called her performance “one of the great debut roles of a young actress”. With her new found fame she moved to New York at the age of 17 and immediately got the starring role in this film, which unfortunately proved to be her undoing as she showed erratic behavior on the set due to a condition that was later diagnosed as being attention deficit disorder. At one point during filming her irritated co-star Falk slapped her because she repeatedly flubbed of her lines, which caused her to then reportedly slap him.  It was behind-the-scenes stories like these that made studios reluctant to hire her and costing her to miss out on a lot of big roles.

While I’ll commend her ability to put on a very effective Brooklyn accent where you can’t even hear a hint of her native British one I still felt overall her performance here is quite weak and one of the main reasons that the film fails. Her facial expressions are too one-note and she shows an aloof detachment in all of her scenes almost like she really doesn’t want to be there. It’s evident onscreen that she and Falk didn’t care for each other making the bonding that their two characters have come-off as forced and insincere. I didn’t know why her character was even needed, I presume it was done to attract the all-important teen demographic, but she’s not funny and there’s long stretches where she doesn’t even appear. Her attire looks too much like the clothing style worn by Molly Ringwald during the 80’s and while that may have been the fashion it’s still good to have a character come up with a clothing style that is unique to them, so she doesn’t end up looking like just a leftover cast member from a John Hughes’ movie.

The supporting cast are what make this movie funny and had the story centered around them it could’ve been special. Gazzo is great as the mob boss who is intimidating one minute and then frightened and contrite the next. Dianne Weist, is quite funny too, particularly her extended crying bouts, as Falk’s mistress and Brenda Vaccaro steals a few scenes as his dog groomer wife. You can also spot Joy Behar in a brief bit as well as Jerry Lewis although his part is quite colorless and I’m surprised he even took it.

The script by Nora Ephron and Alice Arden relies too much on Mafia cliches while failing to add a unique or interesting spin to it. There’s also too many scenes, three of them to be exact, involving the explosion of a limo. One time is okay, but it saps away the surprise/shock value when it keeps happening and much like the movie itself fizzles out with a whimper.

Rachel (Meryl Streep) writes for a magazine as a New York food critic and meets Mark (Jack Nicholson) at a wedding that they both attend. Mark is a political columnist who’s known around Washington for being quite a ladies man, but the two get into a relationship anyways and then eventually despite their reluctance married. Things go smoothly for a while and Rachel even starts to think that she has a ‘perfect marriage’, but then as she is about to give birth to their second child she realizes that he has been having an affair.

The film is based on Nora Ephron’s autobiographical novel dealing with her marriage and subsequent divorce to newspaper reporter Carl Bernstein. The book starts out with her ready to give birth to the second child, but the movie unfortunately takes a more linear approach to the narrative as it plods along through the initial courtship and wedding even though the red flags are clearly there and the viewer knows exactly where it’s going. The story would’ve worked better had it started at the 50-minute mark where Rachel finds out about the affair and then through brief flashbacks shown how the relationship began, which would’ve cut the runtime, which is too long for such slight material anyways, and helped make the proceedings seem just a little less predictable.

A lot of the humor doesn’t work either. The sequence involving the wedding ceremony and Rachel not sure if she wanted to go through with it which keeps the guests there for hours gets botched because I don’t believe the people would’ve remained sitting there for so long. When she finally does decide to proceed with the wedding the guests all look strangely refreshed when in reality most if not all would’ve been long gone and it would’ve been funnier to see them getting married inside an empty room save for one bored wedding guest who remained there simply because it couldn’t find a ride home.

The dream-like segments where an Alistar Cooke-like character talks about Rachel’s marriage problems while hosting a TV-show is too surreal and should’ve been excised because doesn’t fit the tone of the rest of the film, which is more reality based. The segment where Rachel finds out that Mark is having an affair and then it cuts to a shot of her holding a pie that she is taking to a dinner party is too obvious as the viewer immediately gets a strong sense that the pie will eventually be going onto Mark’s face and when it finally does it’s not funny, but anti-climactic instead.

The script fails to add any new insight into an already tired subject and the characters aren’t likable as they have too much of an elitist coastal feel about them and their lifestyles won’t resonate or connect with anyone living in another part of the country. There are just too many people in this whose only concern or form of entertainment is having catty gossip/conversations dealing with who’s cheating on whom, which quickly becomes derivative.

Streep and Nicholson are good and its interesting seeing them play together here as they also starred together just a year later in Ironweed playing two diametrically different people. Unfortunately Jack, who is for the most part quite likable, doesn’t look or behave at all like the real-life Bernstein, which his character is supposedly loosely based on. Dustin Hoffman, who had already played Bernstein in All the President’s Men was the first choice for the role and he would’ve been perfect, but for whatever reason he turned it down.

Ultimately though the film’s biggest drawback is simply Rachel herself as she frets and nitpicks about everything and her anxiety-ridden ways would most likely annoy any man, which makes the ultimate affair when it finally does happen seem inevitable and not a shock at all. When she ponders to Mark about if they should get married and she tells him that she fears she’ll drive him crazy and Mark replies ‘you already are’ I felt like saying ‘she’s driving the viewer that way too.’.