The Gang That Couldn’t Shoot Straight (1971) 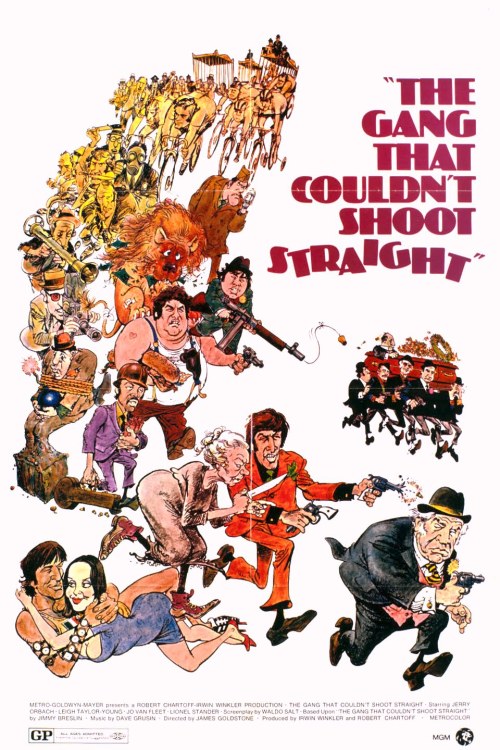 Kid Sally (Jerry Orbach), who works within a crime family where he’s in charge of a small group of crooks, becomes increasingly frustrated at what he feels is a lack of respect that he gets from mobster boss Baccala (Lionel Stander). When Kid is put in charge of supervising a bicycle race that does not go over well he gets demoted, which convinces him to take down Baccala and become the mob boss himself, but the men under him prove inept at every turn. Each time they try to kill-off Baccala the only ones who die are Kid Sally’s guys.

The film is based on the novel of the same name written by Jimmy Breslin and inspired by real-life mobster Joe Gallo who was also the inspiration for Crazy Joe that starred Peter Boyle. However, the Boyle film approached the material in a serious way and tried to keep things more closely tied-in with the actual events while this thing veers-off from what really happened and instead simply uses the situation as a springboard for a lot of zany, comical antics.

One of the main problems is the casting of Orbach who looks nothing like the real Gallo, Boyle was not a perfect match for him either, but he was at least in the same ballpark while Orbach appears too old and without any signs of the mental health issues that had afflicted Gallo who had been diagnosed with schizophrenia in his youth. There are also too many characters to keep track of and Orbach half the time is barely even seen becoming more like a supporting player in his own movie.

The film does have a few amusing moments including the gang’s attempts to bring in a lion, which they use to blackmail the client’s of their opposition. Van Fleet is also quite funny as Kid’s mother who looks and walks like she’s ready to die from old age, but speaks as if she’s a young tough guy. The location shooting isn’t bad either and seeing the entire group of men crammed into Joe’s mother’s apartment as they partake in their weekly spaghetti dinner brings the Italian ambience to a nice head, but director James Goldstone approaches the material in a haphazard fashion and it’s edited in a way that makes it seem more like a collection of vignettes than a story.

The only interesting element is seeing Robert De Niro, complete with long hair, as this young con who comes to New York straight from Italy. He speaks with an authentic accent, which he acquired by going to Italy for a week and recording the people around him and then playing back their voices while he rehearsed. He even prepared for his role as a thief by stealing 2 shirts from a Macy’s department store requiring producer Irwin Winkler to intervene in order to keep him out of jail. Leigh Taylor-Young is excellent as his love interest and her performance as the Kid’s younger more idealistic sister has an organic quality and a far cry from the psycho role that she played in The Big Bounce just 2 years earlier. The romance between her and De Niro and their attempts to forge a relationship while living in a cramped, rundown apartment is kind of touching and had the film focused on these two it would’ve worked better.

Posted in 70's Movies, Black Comedy, Gangster Movies, Movies Based on Novels, Movies that take place in the Big Apple