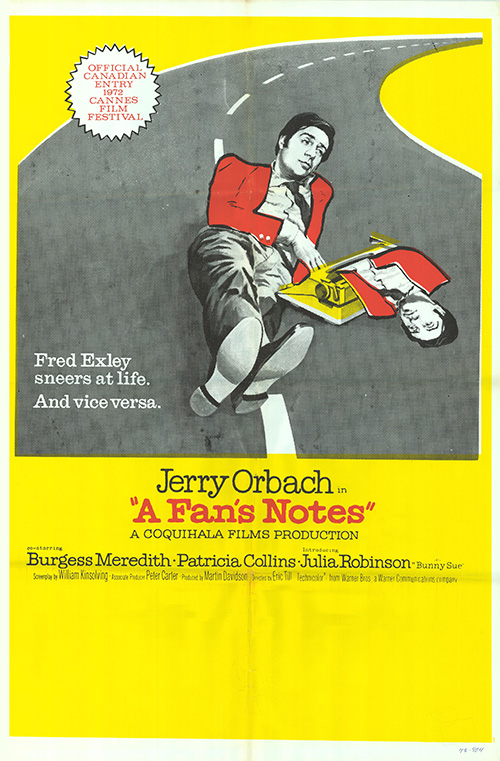 4-Word Review: He writes about himself.

Exley (Jerry Orbach) is a loner residing in and out of mental institutions. He imagines having conversations with beautiful women, but is rarely able to approach them in real-life. He also obsesses over New York Giants running back Frank Gifford and wishes one day to achieve that same type of success, but fears that he’ll be a spectator in life just like he is in sports. He decides to begin writing about his nomadic existence in hopes that it will be a cathartic effort only to find that too harbors its own share of frustrations.

The film is based on the Frederick Exley novel of the same name, but despite the filmmaker’s best efforts it’s not able to achieve the book’s cult potential and in fact Exley himself stated that the movie “bore no relation to anything that I had written”. The idea of trying to somehow visualize a story that was never meant for the big screen is the film’s biggest issue and one that it cannot overcome no matter how hard it tries. The pacing is poor and tries awkwardly to make profound statements while at other points being zany and absurd, which is off-putting.

Orbach does well in the lead and helps hold it together. This also marks the official film debut of Julia Anne Robinson who appeared in only one other movie King of the Marvin Gardens before she tragically died in a house fire at the young age of 24. Like in that movie her acting is poor, but here it works in the positive because it makes her character seem transparent and accentuates the dream-like theme. The segment where she dresses up like a nun and then later as a street hooker, as part of Exley’s sexual fantasy, is fun as is his visit with her quirky parents (Conrad Bain, Rosemary Murphy).

Burgess Meredith appears only briefly, but practically steals it with his outrageousness. Watching him lie down on the floor in an effort to look up a blind woman’s skirt is a real hoot as is his ability to walk on his hands across the edge of a sofa.

Had the film stuck solely with the goofy comedy it might’ve worked and there are indeed a few memorable bits. The part where Exley punches an obnoxious woman (Elsa Raven) in slow motion is arresting and the segment where he imagines himself inside a scene of a his favorite soap opera where he directs the cast to strip off their clothes and have sex right in front of the camera is pretty funny too, but the best moment is the telephone conversation he has with a couple where he pretends to be a lawyer pleading with them to take-in the husband’s mentally unstable brother.