4-Word Review: Mayhem at the movies.

It’s just another evening at the drive-in movies in a small Texas town except this time there’s more action in the theater than in the movie being shown. As the people watch the latest action flick known as ‘Disaster ’76’ on the big-screen there’s all sorts of commotion going on around them. Gifford (Trey Wilson) and Will (Gordon Hurst) are two bumbling amateur crooks who plan on robbing the concession stand during the show. Glowie (Lisa Lemole) is the fed-up girlfriend of Enoch (Billy Milliken), who leads the local teen gang, and who desires a more clean-cut guy like Orville (Glenn Morshower), but Enoch and his obedient thugs try to prevent this potential union from happening. There’s also the paranoid African American Dr. Demars  (Bill McGhee) who frets about having to live in the middle of ‘Klan Country’, but still manages to take his wife (Gloria Shaw) to the show, but also ends up in the process having several inadvertent encounters with the volatile Enoch.

Rod Amateau’s name may not be as well known as other notoriously bad filmmaker’s like Ed Wood Jr. or Tommy Wiseau who helmed the infamously awful The Room, but he probably should be. Not only did Amateau create ‘My Mother the Car’, but he also did ‘Supertrain’, which are considered two of the worst TV-shows ever produced. He also wrote and directed The Garbage Pail Kids, which usually lands high on everyone’s terrible movie list. However, his directorial effort here isn’t bad and for awhile even engaging. My favorite part is a scene done inside a roller skating rink where we see real teenagers, that are age appropriate and with varying body-types, behaving very much like small town teens of that era would. It’s like a taking a time machine back to the simpler times and seeing how things really were, but without the pretension.

The performances are if anything quite lively including Morshower, best known as Aaron Pierce from the series ’24’, in his film debut and sporting a full, bushy head of red hair. It’s also great seeing Lisa Lemole in a prominent role as she later left acting in 1985 when she married Mehmet Oz better known as Dr. Oz. This also marks the acting debut of Trey Wilson, who went on to play many colorful supporting characters before having his career cut short by an unexpected death at the young age of only 40. Gary Lee Cavagnaro, who’s more famous for playing Engelbert in The Bad News Bears, is amusing too as Morshower’s younger brother.

Unfortunately despite a promising start the film ultimately flounders especially during the second act as too much cartoonish silliness gets in the way of any subtle realism. At the end the cars of the customers slowly file out of the drive-in like what had occurred was no big deal and the viewer is left feeling the same way. The stakes needed to be higher and the event needed more of a long-lasting consequence. A funny idea would’ve had the mayhem cause actual destruction to the drive-in while the disaster flick played perhaps even having it burn down to a cinder. Since the theater in real-life got demolished just a few years after this was shot it might’ve been possible and thus allowed the film to leave more of lasting visual impression than it does.

The Drive-in theater in Terrell, Texas as it looked in 1975 when the film was shot. 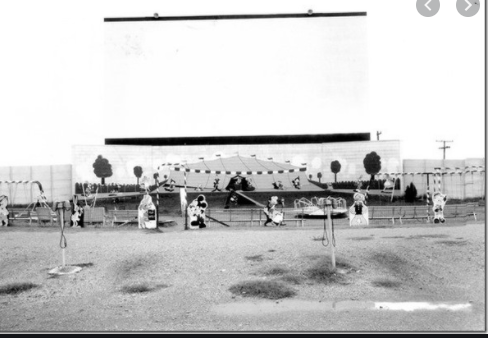 The same location as it looks now.