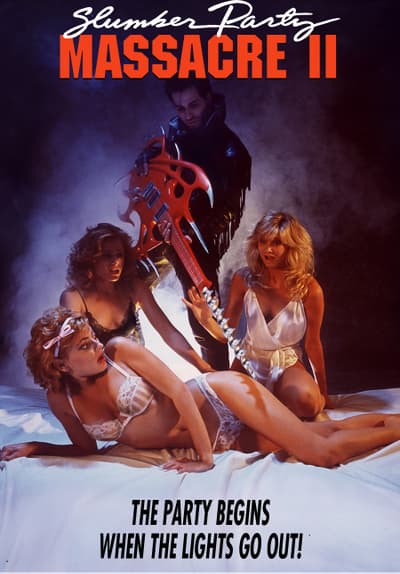 Courtney (Crystal Bernard), who along with her older sister Valerie (Cindy Eilbacher) survived the slumber party attack from 5 years earlier, is now a senior in high school, while Valerie, unable to deal with the trauma that she went through, is locked away in a asylum. Courtney tries to convince her mother (Jennifer Rhodes) to let her go to a slumber party at her friend’s place that is part of some new condominiums that have just been built and after some reluctance her mother agrees, but once there Courtney begins seeing strange visions of a rock star (Atanas Ilitch) with a drill on the end of his guitar that he threatens her with. Initially her other friends don’t see him, but eventually he comes to life and begins killing them off one-by-one.

This is an in-name only sequel that barely has any connection to the first installment other than the Courtney and Valerie characters, but even this is botched because the parts are played by different actors, which wouldn’t have been as much of a problem except Crystal speaks with a southern accent. Many viewers will recognize her from the 90’s TV-series ‘Wings’, but I remember her better as a contestant on the 80’s game show ‘$25,000 Pyramid’ where she was supposed to give clues to her partner in order to have them guess what the secret word was, but she was unable to do this because she didn’t know what the word, which was ‘buoy’, meant. In either case the Courtney character from the first film never had a southern accent, so why then would she have one now?

The rest of the cast is okay and looks more age appropriate than in the first film though the nudity is much less. The humor though is missing, which is a big problem. The script tries to make up for it by giving the characters names that are connected to people from other horror films, but this ends up being too obvious and not as cute and inspired as the filmmakers clearly thought it was. The only amusing bit is Sally, played by Heidi Kozak, who obsesses over pimples on her face even when none are visible and yet still puts on acne treatment, but the real kicker is when Courtney, having one of her weird visions, visualizes Sally’s entire face turning into a giant zit and then having it pop out a long stream of puss, which is genuinely funny.

The rest of it though doesn’t click mainly because there’s no clear understanding for why any of this is happening. Who the hell is this Elvis-like rock star and why is he haunting Courtney and her sister? Some people have said this was the killer from the original film, but why then does he get reincarnated as a singer? Unlike Nightmare on Elm Street, which this is clearly trying to emulate, there’s no blueprint to the rules. In the Freddy movies he could only terrorize his victims in their sleep, but here the killer jumps out of the dreams and becomes real, but how? Having a killer, whose tacky get-up makes him resemble Vinny Barberino from ‘Welcome Back Kotter’ or the 50’s revival group Sha Na-Na, able to virtually do anything isn’t interesting. There needed to be some limitations and rules, but the film fails to supply any and seems content to just make things up as it goes, ultimately causing the whole thing to be quite inane and pointless.