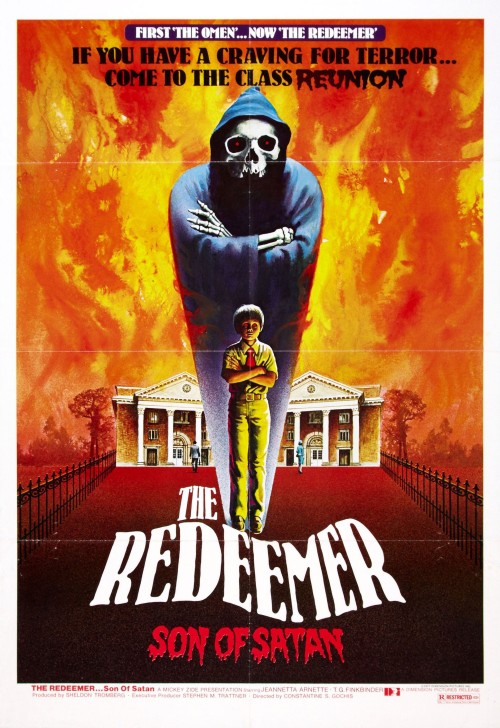 4-Word Review: Murdered for their sins.

Six people, who attended the same high school and graduated from the class of 1967, get invited to a reunion. When they arrive they find that the school has been shut down and the building abandoned, but are let in by a kindly janitor. Inside is a room set-up for a party including an array of delicious food and drinks. They partake in the meal, but still wonder why they were the only ones from the class that got invited. They then begin getting killed-off in violent ways and when the remaining survivors try to leave they realize they’ve been trapped inside, but none of them knows who’s committing the killings, or why?

This yet another proto-slasher made long before the release of Halloween, which has become the standard. Like with Savage Weekend, which was reviewed here last October, this movie goes on its own tangents, unlike 80’s slashers, with deviations that make for a fun watch and are filled with a lot of weird twists and imagery.

The entire production was filmed on-location in the town of Staunton, Virginia in the summer of 1976. The Staunton Military Academy was the building used for the setting of the abandoned school. It was loaned out to the producers for one month by Layne Loeffler, who appears briefly near the beginning. He was hoping that by allowing the movie to film there that it would generate enough interest to allow the academy  to open back-up, but the movie didn’t gain as much attention as they thought causing it to eventually be torn down just a few years later.

As with most low budget films it has the expected trappings of an independent feature produced and directed by a bunch of first-timers including a grainy film stock, which detractors of the film used as an excuse to hate it. I felt though that the faded look worked in its favor as it made it seem more like viewing lost footage dug up from years in storage and thus witnessing carnage captured by a hidden camera.

Despite the majority of the cast never doing another movie after this one, which includes both the director and writer, I came away more impressed than disappointed. There are indeed some genuinely scary moments and the killings are surprisingly vivid. In fact they look more realistic than many of the ones done in bigger budgeted movies that came-out later. The pacing is handled much better too and doesn’t have the slow, awkward drama segments like in other horrors. Even the characterizations showing people’s need to impress others while simultaneously putting up facades to hide what they feel others will judge them harshly on, a common occurrence in most high school reunions, is well brought out.

Many only complaint is the ending that doesn’t offer any final twist. I was fully expecting that the character of the Redeemer, played by T.G. Finkbinder, would ultimately be exposed as a fraud since he did the killings over what he felt were various perceived sins committed by the others and yet the film acts like these brutal murders were somehow justified and the victims ‘deserved’ what they got, which is pretty warped. However, outside of its weird messaging, it’s still an interesting obscurity particularly for slasher film collectors.