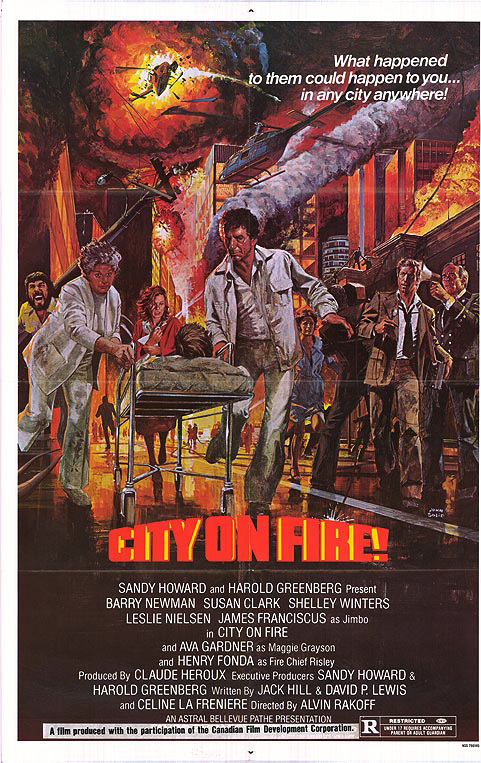 4-Word Review: Title says it all.

When Herman Stover (Jonathan Welsh) gets fired from his job at an oil refinery he decides to get his revenge by opening the valves on the storage vats, which sends gasoline spewing out into the water system that soon sets the entire city on fire. Dr. Frank Whitman (Barry Newman) realizes that his hospital is in line of the approaching blaze and tries desperately to get the place evacuated.

Despite the American cast the film was financed by a Canadian production company and filmed on-location in Montreal with a few shots done in Toronto. While the movie bombed at the box office and later got mocked in an episode of ‘Mystery Science Theater 3000’ it’s actually decent on the special effects end.

In fact I found the effects to be quite impressive particularly at the beginning where two firefighters find themselves trapped in an apartment building in an actual blaze where the flames literally leap towards the camera and make the viewer feel like they are being engulfed by it. Most movies will show people set on fire, but only while wearing a protective body suit, but this one has them set ablaze while wearing regular clothes and with flames not only shooting out from their clothing, but their hair as well, which looked dangerous to film. It also graphically captures the charred burned skin of the victims.

The eclectic cast of old Hollywood veterans is fun for the most part with Ava Gardner hamming it up as an alcoholic newswoman trying to cover the disaster. It’s also nice seeing Shelley Winters playing a ‘normal’ person for once instead of a kooky, eccentric and she does it so well that she ends up not standing out at all, which never happens in any of her other movies.

Watching Susan Clark play a wealthy socialite who suddenly becomes a Florence Nightingale incarnate after the victims start piling up is too much of a dramatic arch and the film should’ve just had her as a regular nurse from the start. The part though where she helps with a delivery at least has the baby coming out of the womb with an umbilical cord as too many other movie births never show this.

Outside of the effects there’s little else to recommend. The scenes dealing with the culprit, played by Welsh, are dumb. For one thing he doesn’t seem unhinged enough to do what he does and in fact comes off as quite bland and even tries helping the victims later on. Also, when an employee gets fired they are usually escorted out of the building by security especially in a refinery and not allowed to just run around the facility freely and unmonitored like here.

It would’ve worked better had the number of characters been cut down to just a few and the story focused solely on their efforts to survive instead of coming off more like a news report trying to capture the chaos as a whole.  The idea of mixing pyrotechnic special effects with a lame storyline and hallow characters doesn’t work and becomes just a poor excuse for a movie.