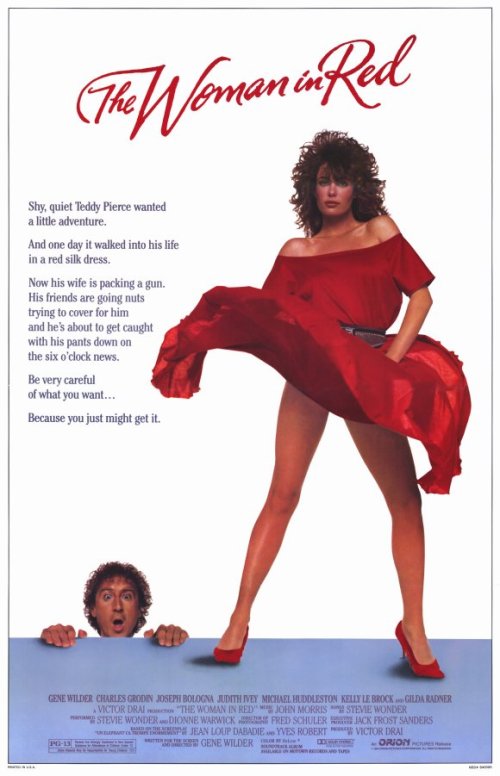 4-Word Review: Lusting after a model.

Teddy (Gene Wilder) seems to have it all. A great wife (Judith Ivey) a good home in the suburbs and stable job, but then one day that all changes when he inexplicably meets Charlotte (Kelly LeBrock) a beautiful model who turns him on so much he can no longer think straight and jeopardizes his marriage in the process. He gets his friends Buddy and Joey (Charles Grodin, Joseph Bologna) to cover for him while he makes any excuse he can to get away and see her. Unfortunately through a misunderstanding the homely Ms. Milner (Gilda Radner) thinks she is the source of Teddy’s affections, so as Teddy tries to get with Charlotte he must also avoid Ms. Milner who is just as relentless.

The film starts off with lots of potential, but is unable to fully deliver. Part of the problem is that it introduces this amusing side-story involving Radner’s character and then abruptly drops it during the second half. Radner makes for a perfect comic foil and her scenes should’ve been played up much more. However, her attempts to get back at Teddy by vandalizing his car is amusing, but you would think that Teddy would want to know why she is so angry at him as he is unaware that he has mistakenly asked her out or at the very least sued her for the damages that she has done and yet the film doesn’t tackle any of this, but realistically should’ve.

Wilder, who also wrote and directed the film, is okay, but it doesn’t take enough advantage of his signature comic rants and high strung persona. Bologna is good as Teddy’s brash, womanizing friend, but I didn’t understand why he got so upset when his wife left him as he had openly fooled around on her with a lot of different women and most men in his situation would rejoice that they were now ‘free’.

The usually reliable Grodin is ineffective and the segment where he pretends to play a blind man that inadvertently tears up a bar is dumb and unfunny. I did however enjoy LeBrock who looks gorgeous throughout.

There are a few amusing moments including Teddy’s attempts at riding a horse despite having no experience, but overall the comedy is spotty. The pacing is poor and the story is disjointed coming off more like a bunch of vignettes strung around a one-joke plot. The only thing that saves it is the ending where Teddy attempts at ‘hiding out’ while standing on the ledge of a tall building that quickly attracts a lot of onlookers who think that his ready to jump, which is the movie’s best moment.

This film is actually a remake of the 1976 classic French film Pardon Mon Affaire, which I will review for next week.