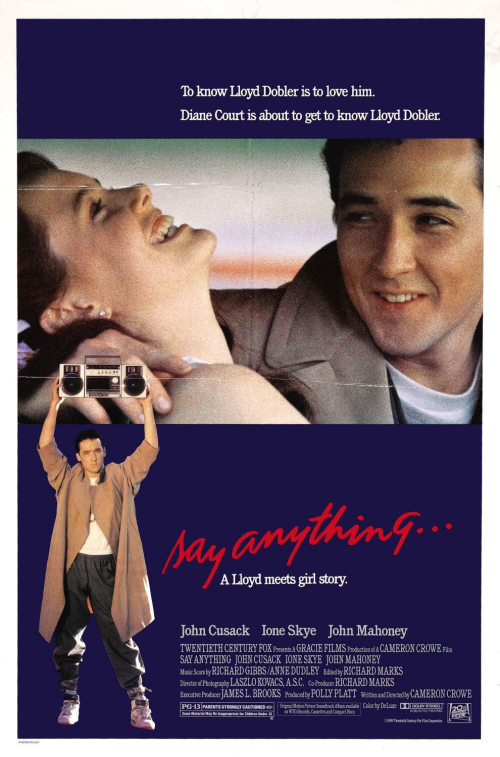 Lloyd Dobler (John Cusack) is a classic underachiever living with his sister Constance (Joan Cusack) and no real idea what he wants to do with his life after graduation. He has a crush on Diane Court (Ione Skye) who is a valedictorian. Lloyd manages to ask her out, but finds that she is set to go to England in the fall on a scholarship. Her father (John Mahoney) feels that Diane can do better and tries to convince her to dump him, but it turns out he has some serious problems of his own.

The film is a refreshing change of pace from most Hollywood romances that tend to portray relationships in too much of a shallow way. Here you see things build slowly and are full of all the awkward moments and obstacles that come into play with any blossoming relationship. The two don’t just jump into the sack right away either. In fact after their first date they don’t even kiss, but instead share a nice little hug, which I really liked.

Both characters are likable, but in opposite ways and I enjoyed how the film cuts back and forth between the two during the beginning and shows the viewer just how different their personalities and lifestyles are. Skye has a highly appealing face and the fact that she is not some partying ditz, but instead a studious student who even enjoys working with old folks at a retirement home makes her all the more interesting. Cusack’s inability to decide on a career path is quite relatable and it is nice seeing him share some scenes with his real-life sister, who strangely appears unbilled.

The humor is subtle, but amusing. I loved the part where Diane accepts a date with Lloyd after he calls her up and then when she hangs up the phone she takes out her yearbook to see what he looks like. The best moment though is where Lloyd is getting advice about women from his guy friends only to turn around and ask them why if they know so much about women are they sitting on a street corner all alone on a Saturday night.

The talented Lili Taylor appears in an early role as Lloyd’s friend and famous model-turned-actress Lois Chiles can be seen briefly as Diane’s mother. I was a bit shocked to see Eric Stoltz in such a small and insignificant role that had only a few lines as he was at the time only four years removed from his starring role in Mask.

The only complaint that I have about this otherwise gentle slice-of-life flick is the secondary story thread concerning Diane’s father who gets into trouble for embezzling money from the senior citizens at the retirement home that he runs, which when compared to the romantic angle seemed very jarring and out-of-sync. In a way it kind of tarnishes the coming-of-age quality of the story and I felt the film would’ve have been more successful had this part been left out completely. I also wasn’t quite sure what the meaning was for the title or how it had anything to do with the story.