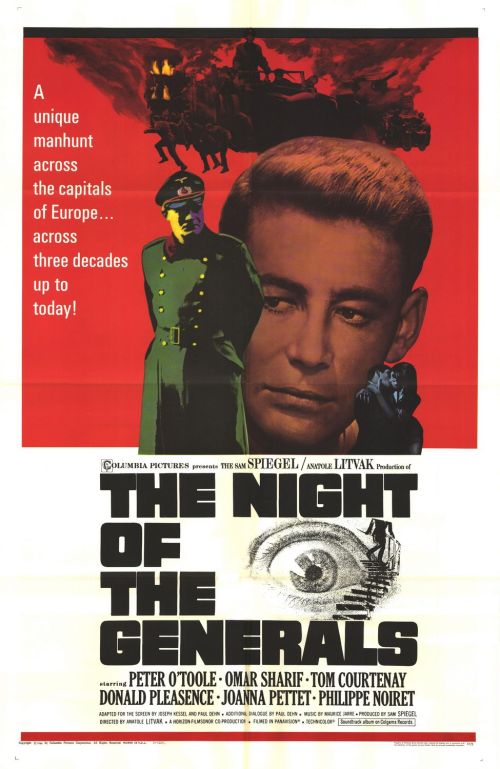 In 1942 during the height of the war a Polish prostitute is found murdered and sexually mutilated. A witness spotted a man leaving her room who was wearing a uniform that had a red stripe running down the side of his pants, which signified that he was a general. Major Grau (Omar Sharif) who is in charge of the investigation decides to interview three generals (Donald Pleasance, Peter O’Toole, Charles Gray) who were in the vicinity and have no alibi, but finds a lot of pressure not to pursue the case and it takes several decades before it finally unravels.

The storyline is compelling enough to keep you intrigued, but the script is talky with not enough action. Certain story threads seemed unnecessary and the film could have been more compact. The actors are mostly all British, but make no effort to speak in German accents despite playing Nazi roles. The music cues that are used whenever an important plot point is revealed or to transition to another scene are too loud and have a generic quality to them that does not appropriately reflect the time period.

O’Toole gives an interesting performance as psychotic ready to fall completely apart. His extreme emphasis on cleanliness especially to those that serve under him and his nervous twitches steal the film as well as a bit where he commands his men to destroy an entire block of a town simply to get at a couple of snipers. His bizarre reaction to a painting of Vincent Van Gogh that he spots in a gallery is intriguing especially when it occurs twice and his blank blue-eyed stare becomes almost piercing.

Sharif does quite well in support and despite being born and raised in Egypt does a convincing job as a Nazi and I think make-up was used to lighten his skin. Tom Courtenay is good as O’Toole’s assistant and the relationship that they form has some interesting subtexts to it.

Joanna Pettet’s appearance however seemed pointless and although the constant sparring she has with her mother (Joan Plowright) was fun it really didn’t add much to an already cluttered narrative. Christopher Plummer also gets stuck in a thankless part where he is seen for less than five minutes before promptly being killed off.

The identity of the killer gets revealed 45 minutes before the end, which hurts the suspense. I also didn’t like that the Sharif character gets killed off and the rest of the investigation is taken over by a Frenchman (Philippe Noiret) which seemed defeating since we had spent so much time siding with the character’s plight to seek justice despite all the obstacles. The film’s very final moment is supposed to be dramatic and poignant, but instead goes over-the-top and becomes weak and strained.