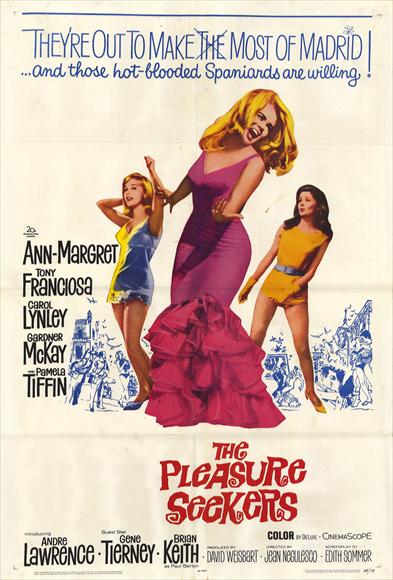 Three young American women decide to room together in Madrid. Fran (Ann-Margret) is the flirtatious, sexy one. Maggie (Carol Lynley) is more stoic and sensible while Susie (Pamela Tiffin) is the most naïve of the trio. Fran falls in-love with a dashing young doctor while Maggie has an affair with her much older boss Paul (Brian Keith) and Susie tries to get her playboy boyfriend Emilio (Anthony Franciosa) to settle down and marry her.

The film is cute and engaging for the most part and helped mainly by the performances and contrasting personalities of the three female leads. Ann-Margret is quite sensual especially when she sings and dances in her bikini on the beach. She also does a great rendition of the film’s title tune and I was at a lost as to why it wasn’t played over the opening credits as it has a definite verve and bounce. Lynley is solid as the more jaded worldly-wise of the three and helps give the story an anchor. Tiffin is amusing with her wide-eyed comments and despite being considered dumb turns out to be quite clever in the way she manipulates her womanizing boyfriend.

I was hoping the film would focus more on their living arrangement as it is evident from the beginning that their different habits and perspectives would be ripe for interesting comic scenarios. Instead the film veers almost exclusively to the romance angle, which makes the film one-dimensional and dangerously close to being completely vapid. Certain prime comic set-ups do not get followed through on and the part where Susie allows herself to be lead into Emilio’s car before she even knows his name is just too recklessly insane even for a more innocent era. The songs are sparse and spread so far apart that you almost forget that it is a musical. I did like the flamingo dance segment done on stage by a talented male performer and then later at the beach by two children who couldn’t have been more than 3-years-old.

Normally I am a great admirer of Brian Keith, but his appearance here is all wrong. His gruff, brash manner does not work as a love interest and there is absolutely no chemistry between he and Lynley making their love affair seem unbelievable. This was also Gene Tierney’s last film.  She gets a rather thankless, small part as Keith’s jilted, bitter wife. Her hair is much shorter and she looks very middle-aged and lost all her youthful beauty that she had during her classic film roles of the 40’s and 50’s, but her confrontation with Lynley during a party is okay.

Basically this is an updated version of Three Coins in the Fountain, which was done by the same director and the only difference being that it took place in Rome. The film is pleasant enough to be watchable, but rather empty and mindless and best suited for romantics looking for an evening of mild entertainment.

Not Available at this time.