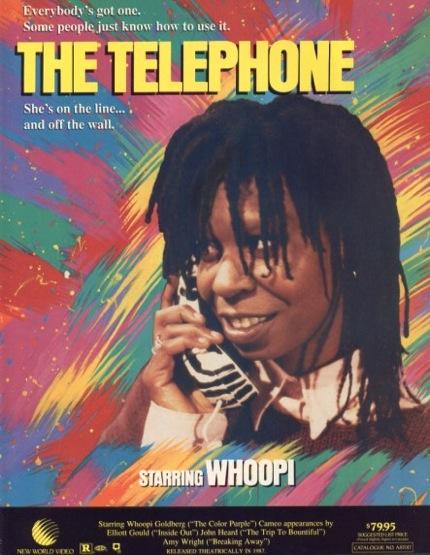 4-Word Review: I liked the owl.

Vashti Blue (Whoopi Goldberg) is an out-of-work actress sitting inside her dreary small apartment and having conversations with people over the phone. She also argues through a locked door that she shares with the women next door while waiting for a call from an agent for a job opportunity that never comes.

I am all for experimental cinema, which is the best way to describe this misguided project, but to work it still needs an artistic design and focus and this has none. It pretty much comes off as somebody’s cheap home video where a camera is turned on and then someone is allowed to rant and rave without pause for eighty minutes. Some could blame Rip Torn who is an actor turned first-time director here, but in subsequent interviews he has complained that Whoopi wouldn’t listen to any advice or direction that he gave and pretty much made his presence insignificant.  You could also blame the screenplay, which was written by the very odd pairing of Terry Southern and Harry Nilsson. Southern is best known for penning the screenplay for Dr. Strangelove while Nilsson is a famous singer/songwriter whose best work was doing the song ‘Everybody’s Talking’ that was the theme for the classic film Midnight Cowboy. However, Whoopi took great liberties with the material and ad-libbed a lot, so what was originally put down on paper and what is left on the screen could be minimal.

The conversations that Whoopi has over the phone ranges from lame to ridiculous. One includes calling the police and trying to get them to arrest a video store owner because he rented her a tape of Christmas in July with a scene excised is too absurd to be even remotely amusing. The Whoopi character also incorrectly stated that Frank Capra was the director of the film when it reality it was Preston Sturges.  Goldberg puts on a variety of accents including British, Japanese, Indian, and Southern as well as a few others, but her Irish one is suspect and her impression of John Wayne is terrible.

The apartment set is dull and bleak. The viewer feels trapped and with such little visual design their eyes and thoughts are apt to wander. Cutaways are sorely needed, but there are none. An infuriating moment is when there is a sound of a loud car pile-up outside, but despite this being a visual medium the camera never cuts away to show any of it. This was probably due to budget constraints, but what is even more perplexing is that there are sounds of people screaming, police sirens and even rioting and then a half minute later it all suddenly stops for no explained reason.

The supporting cast is eclectic but wasted. Noted character actor Severn Darden, in his last film role, appears in a brief bland bit as Whoopi’s neighbor. Elliot Gould gets a few minutes as Whoopi’s former agent and seems to be seriously slumming as he was a headline star during the seventies and now sadly stuck in this. John Heard is the only one who comes off best as a caustic, brash telephone repairman.

Whoopi’s two pets upstage the human cast by a mile. Her pet owl is very cute and I dug the goldfish particularly when he gets sucked down the drain of her bathtub and she must use a plunger to save him, which is the only time there is any action in the entire movie.