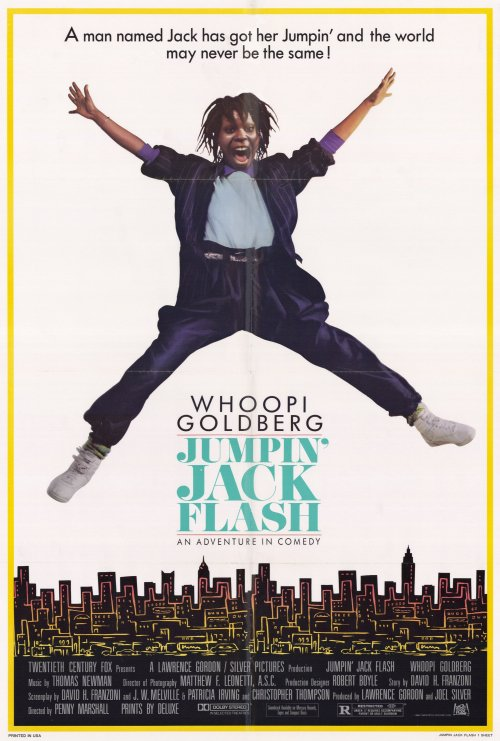 Due to Whoopi Goldberg turning 58 on November 13th and because whenever I watch a clip of ‘The View’ on YouTube she tends to be my favorite panelist I have decided to review each of the films she starred in during the 80’s for the next 7 Mondays. Critically her films in that decade did not fare well and she has even disowned a few, but since this is a 80’s movie blog I feel it is my professional duty to review them anyways whether some of them are torturous to sit through or not.

In this one she plays Terry Doolittle a bank employee who does a lot of transactions and communications through her computer. One day she gets a message from someone using the code name Jumpin’ Jack Flash who asks for her help supposedly to save his life. This sets into motion wild adventures in which she puts her life at risk and gets involved with everything from the CIA to foreign government powers.

Whoopi is the best thing about this otherwise silly and contrived plot. Director Penny Marshall nicely allows Whoopi room to flex her comic muscles while also taking advantage of her sassy and streetwise humor. The part where she tries to decipher the lyrics of the ‘Jumpin Jack Flash’ song by the Rolling Stones is full of all sorts of Goldbergisms and it’s great. Her impressions of Ray Charles and Diana Ross are on target as well, but my favorite part is when she is drugged with truth serum and then goes into a beauty salon and tells everyone there exactly what she thinks. My only complaint to her performance is her unnecessary use of the F-bomb, which turns this otherwise kid friendly story into an R-rated movie.

It is also fun to watch a lot of up-and-coming comic stars in small roles including Phil Hartman, Jon Lovitz, James Belushi, Tracy Ullman and Annie Potts. There is even a surprise appearance by Jonathan Pryce at the very end, but my favorite is when Penny casts her older brother Gary as a detective who has a humorously confrontational exchange with Whoopi inside a police station.

Marshall’s directorial debut is limp. I liked all the movie posters that line Whoopi’s apartment, but otherwise the visuals are dull. Her workplace environment and conversations that Whoopi has with her co-workers seems realistic, but not particularly interesting or amusing. The opening segment limps along while barely being engaging. The part where Whoopi gets her dress caught in a shredder has up-tempo cartoon-like music played over it, which puts the thing too much at a kiddie level.

The story itself is convoluted and confusing with little that is plausible. The shootout inside the office gets particularly ridiculous, but the biggest problem I had with the script is the way the Terry character gets herself involved in the mess in the first place. If she knew the person asking for her assistance to this dangerous mission I might understand it, but she doesn’t. After she is shot at and nearly killed, gets her apartment ransacked and is verbally threatened she decides to immerse herself even more into the precarious situation even when she is given the opportunity to get out of it, which most normal people would’ve.  The viewer starts to lose empathy for a protagonist when they act irrationally, which this one does. The idea that she is doing it because she has ‘feelings’ for this other person even though she has never met him, knows nothing about him and doesn’t even know what he looks like is just plain stupid.

Although the Rolling Stones song from which the movie is named after does get briefly played later on I felt it should have been used over the opening credits. I still prefer the Stones version, but Aretha Franklin’s rendition that is used during the closing credits isn’t bad.