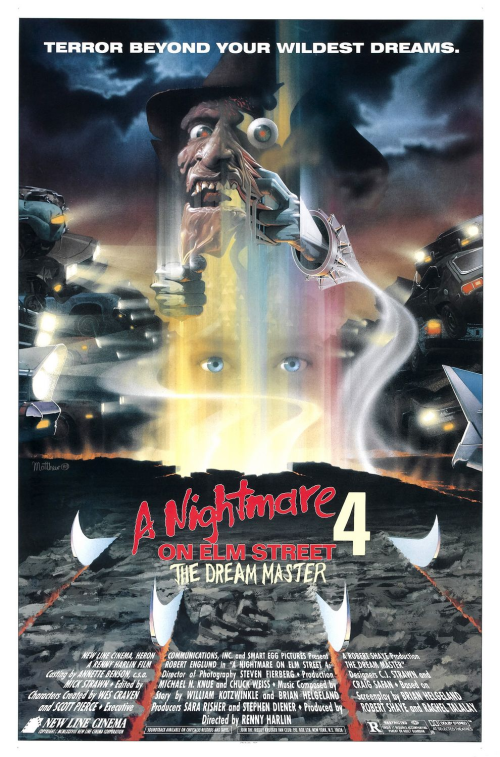 Freddy Krueger (Robert Englund) tracks down and kills the last of the three remaining Elm Street teens, but Kristen (Tuesday Knight) wills her dream powers to her friend Alice (Lisa Wilcox) who now finds herself taking on the different traits of the past victims.  As Freddy tries to draw on a new batch of teen victims she fights him off with her new found abilities.

What started out as a highly original idea has now become formulaic. I didn’t find any of it scary, or even all that entertaining. The nightmare segments are redundant and the storyline cluttered. I wasn’t wrapped at all in the perils of any of the characters and would be surprised why anyone would. The whole series would’ve worked better had it stuck with the original Nancy character solely being the victim of the dreams and her lifelong battle against Krueger instead of always having some new character being the victim of the nightmares, which starts to make it derivative.

The dialogue is stilted and the characters are cardboard. The acting is also uniformly bad. Past entries in the series have had teen cast member go on to super stardom, but it is easy to see why this one didn’t. Due to being pregnant Patricia Arquette was unable to reprise her role as Kristen and Knight makes for a very weak replacement. I also didn’t like Wilcox because she seemed to resemble Sissy Spacek and started to remind me too much of the original Carrie. I did appreciate Danny Hassel as Dan simply because his wooden acting and one-note facial expressions aptly reflected the dull personality of your average high school jock.

The special effects are okay. The part where Alice is at a movie theater and gets sucked into an old movie is groovy as is watching the attractive Brooke Theiss morph into a giant cockroach. The segment where the souls of Freddy’s victims burst out of his body is excellent and the best moment of the entire film. However, other effects like having the heads of Freddy’s victims on sausages of a giant pizza are too silly.

Englund is in top form and really seems to be having fun. The part where he bursts out of a water bed and asks Joey (Rodney Eastman) “How’s this for a wet dream?” is fun as are his other choice lines. Englund even appears briefly as a female nurse and does as the Freddy character a rap song during the closing credits.

The series at this point looks to be dying a slow death with not enough new elements being added in and too much rehashing of the same old stuff. It seems incredulous to me that another two entries were made before the concept was finally retooled.