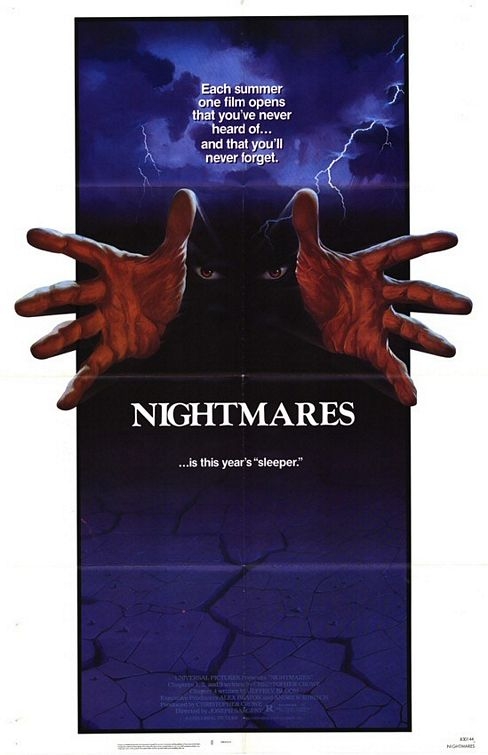 This film is made up of an anthology of horror tales that were originally made for the ‘Darkroom’ TV-show that ran from 1981 to ’82 on ABC and was hosted by James Coburn.  The network deemed these stories to be ‘too intense’ for television so Universal decided to make it into a feature film. Unlike the series there is no actor or host that ties the stories together, which is unfortunate as Coburn’s presence could have given it a little personality. The biggest reason I was interested to watch this was to see what was considered ‘too intense’ for television back in the early 80’s and after viewing it the answer is ‘not much’.

The first story is entitled “Terror in Topanga” and features a mental patient on the loose in a suburban town and a housewife named Lisa (Cristina Raines) who has run out of cigarettes and feels compelled to go out late at night to get some. The segment is predictable and pedestrian with a twist ending that is a big letdown. Christophe Crowe who wrote the story is married to Raines in real-life and the two teamed up a few years later for an episode entitled “Prisoners”, which aired on the 80’s version of ‘Alfred Hitchcock Presents’ and is much, much better than this one and well worth seeking out.

“Bishop of Battle” makes up the second story and features Emilio Estevez as a teen obsessed with beating a video arcade game. This segment features the best visuals. I found the graphics that were used for the game were actually kind of impressive and fun to watch. Estevez is enjoyable as the tightly wound character and this segment also features Moon Zappa in a small part as well as Billy Jacoby (Jayne) who is the younger brother of famous child actor Scott Jacoby and looks just like him.

Lance Henriksen stars in the third story “The Benediction” as a priest who is grappling with his faith and thus decides to leave the ministry. As he starts out in his car on his journey to get away he finds himself being menaced by a black pick-up truck whose driver he cannot see and the two start to play a game of cat-and-mouse with their vehicles on a lonely stretch of desert highway. The scene where the pick-up bursts through the ground is the only interesting moment in what is otherwise a weak, uninspired rip-off of Duel.

The fourth and final story “Night of the Rat” is by far the worst. It pertains to a suburban family whose house becomes invaded by a giant demon-like rat. The special effects used to create the giant sized rodent are awful and would be almost comical if it weren’t so thoroughly botched and ridiculous. Veronica Cartwright who plays the perpetually nervous, high-strung mother gets a bit one-dimensional and irritating, but it is nice to see Bridgette Anderson as the daughter who later went on to star in Savannah Smiles before dying of a drug overdose at age 23.

The stories are flatly photographed with dull looking sets that have no cinematic quality to them and no business being on the big screen. This thing was given an R rating even though there is no swearing, or nudity and just the minimal of violence. I realize that the PG-13 rating was still a year away at the time, but this still should have been given a PG.