4-Word Review: Chuck is in control.

Supposedly the inspiration of The Doors song ‘Riders on the Storm’ this stylish mystery deals with Mela (Marlene Jobert) a beautiful young woman who finds herself being stalked by a strange bald headed man carrying a mysterious red bag. He follows her to her home where he then rapes her. She manages to get her hands on one of her husband’s rifles and shoots the man dead. She throws his dead body over a cliff and into the sea where she thinks that will be the end of it, but then an American by the name of Harry Dobbs (Charles Bronson) shows up who seems to know all about it and will not leave Mela alone until she confesses to the whole thing.

Director Rene Clement is a master at his craft. Every shot and scene has an evocatively stylish flair particularly at the beginning. The lighting, camera work, editing, and moody score by Francis Lai are first rate and help grab the viewer in right away and keep them hooked. There are strong shades of Hitchcock, but like with Hitch the performers become nothing more than pawns to the director’s vision. The actors seem a bit stifled and unable to create any nuance to their characters. Everything is done to propel the story, which is fine, but sometimes expanding the scenes to allow the actor’s to expound more gives a film a fresh and natural flow, which is lacking here. The rape sequence relies almost completely on the breathing sounds of Mela and some interesting edits, which I felt was good, but it could have been even more provocative and cutting edge had this part been extended and a little more graphic.

While the script by Sebastien Japrisot is full of intriguing twists and nicely complex the middle part dealing with Harry’s seemingly unending interrogation of Mela goes on much too long and bogs things down. I would have liked to have seen a little more variation of their roles where at times Mela would get the upper-hand, but for the most part Harry remains in complete control and Mela is dominated and confused throughout, which isn’t as interesting. 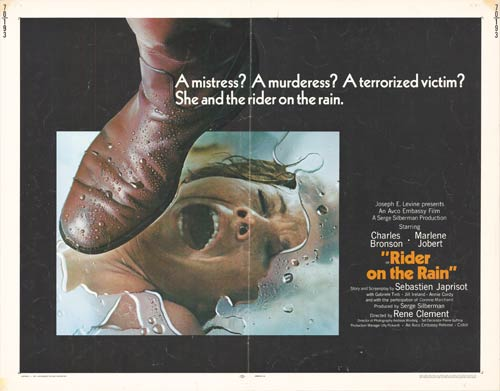 Jobert is sexy and adds a definite sparkle to the film. Normally I prefer women with long hair, but her short cut gives her a youthful appeal. Her blue emerald-like eyes make a great contrast to her reddish hair and her freckles helps accentuate the youthful and naïve quality of the character. Her husband Tony played by Gabriele Tinti, has the chiseled boyish looks of a male model with a pair of baby blue eyes that is almost as stunning as Marlene’s making this couple enjoyable to watch for their looks alone for both male and female viewers.

Bronson is at his tough guy best. He takes on seven men in a room and kicks their ass without breaking a sweat. Unfortunately that is all the action that there is and there needed to be more of it. Jill Ireland appears briefly as a character that has little to do with the plot, but looks gorgeous nonetheless.

The film’s final plot twist is rather boring and the conclusion is weak and non-eventful. Mystery fans may enjoy the film’s winding story, but Bronson enthusiasts will be disappointed at the film’s lack of action.