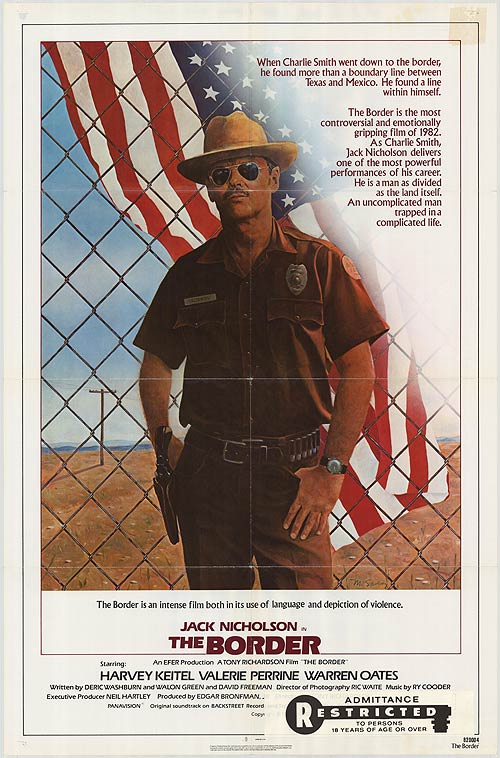 Charlie Smith (Jack Nicholson) is a guard new to the border patrol who must learn to deal with the ugly realities that come along with his profession including becoming more and more pressured to get involved with the corruption that goes on there.

This is a stark presentation with an authentic atmosphere that at times makes it seem like a documentary. The viewer becomes submerged in this intelligent study on a serious and important issue with a result that is nothing short of enlightening. Unlike most other Hollywood movies nothing is over-the-top or melodramatic. It doesn’t try for shock value nor resort to clichés. The narrative is straightforward and uncompromising while offering no easy answers or annoyingly false wrap-ups.

Director Tony Richardson takes an expectedly humanistic approach and yet doesn’t seem inclined to push any type of agenda. This film has a look and feel different from any of his other films. He is known primarily for his wacky comedies (Tom Jones, The Loved One) and yet this film is grainy and grim. Much of that is due to the excellent use of natural lighting. This film has a very serious tone throughout and yet for some reason doesn’t end up being oppressive like some of those other ‘important’ pictures. It is also well paced with a riveting and compelling finish.

Nicholson gives a sensitive and sincere performance and a rare turn seeing him underplay everything. Valerie Perrine is very good as his wife and having her spend lavishly while oblivious to the poverty around her makes for interesting insight. Warren Oates is top-notch as always in support as Charlie’s supervisor. His character is brimming with a potential confrontation with Charlie and it is unfortunate that the movie doesn’t pursue this further.

Overall this is a strong picture that deserves more praise and attention and one of Nicholson’s best performances.

Posted in 80's Movies, Drama, Movies with a rural setting