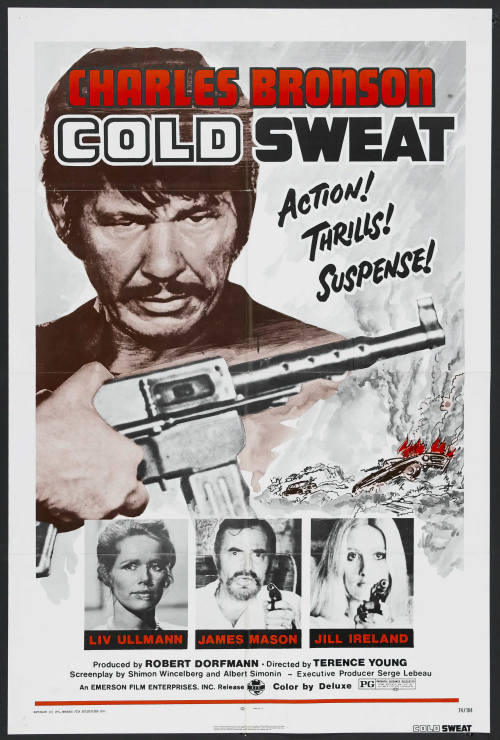 Joe Martin (Charles Bronson) is a man living with a past. Ten years earlier he was part of a prison break led by corrupt Captain Ross (James Mason). Joe was selected as the getaway driver, but after he witnesses one of them kill a police man he decides to drive off with the car and strand the others. Now he is living the quiet life in the south of France with his new wife Fabienne (Liv Ullmann) and her daughter Michele (Yannick Delulle), but as he starts to settle into his new lifestyle he finds that the old gang has tracked him down. They want him to be the boat driver in a drug deal they have planned and they won’t take ‘no’ for an answer. Fabienne and her daughter Michele are brought along for collateral, but Joe has a trick up his sleeve and instead kidnaps Ross’s girlfriend Moira (Jill Ireland) and puts her in an isolated cabin and when all parties converge onto the place is when the tensions and action boils over.

This is a simple film with the most basic of storylines. The characterizations are standard with no gray areas in-between. The good guys are really good and the bad guys really bad and nothing is ever nebulous as the tried and true formula gets followed from beginning to end. However, I liked it. Sometimes it is nice to have a film that isn’t trying to reinvent the genre and does things in a compact, crackling non-think style where the viewer can sit back and enjoy an old fashioned white knuckler without having to be challenged. After a slightly awkward start the film begins to roll and then never lets up. Chuck puts his gruff, stoic caricature to the hilt here helping propel the viewer emotionally into the action as he finds increasingly novel ways to overpower the baddies just as the odds look stacked against him.

Having him married to Ullmann was offbeat casting, but it works. Ullmann who has quite possibly one of the most expressive faces in all of cinema seems game for the proceedings. It was nice seeing her in something different than a brooding Ingmar Bergman drama. She gets right into the fray and becomes an integral part of the story and succeeds quite well.

The always reliable and many times brilliant Mason sports an American accent and its fun. He also takes part in a great death scene that gets amazingly prolonged until his increasingly pale complexion becomes genuinely disturbing.

Ireland shows flair as a jaded hippie type. Her and Chuck’s sparring clicks and casting the real-life couple as characters with animosity for the other is cute. I just wished that director Terence Young had played it up more and given Ireland more screen time.

Having the second half of the film take place almost exclusively at an isolated locale gives the picture added personality, but what impressed me the most was the action. In particular was a car chase along the long, winding French roads. I know the car chases in Bullitt and The French Connection get the honors for having the best and most famous chase sequences, but the one here comes amazingly close. I found myself turning uncomfortably in my seat as Chuck’s car travels each curve at high speeds and when he takes the auto off the road and onto the rugged terrain I was out of breath. The foot chase between Fabienne and her daughter and one of the lone gunmen along the ragged, rocky landscape is equally exciting and well captured at different angles.

This one is sure to please Bronson fans as it has all the ingredients his films are known for. My only complaint is with the DVD transfer available on Amazon Instant. Normally I love the way Amazon has made available films that are hard or even impossible to find and most of the time picture quality is decent to good, but here it looks like someone’s old home movie with a color that is faded and at certain spots completely washed out. It also very grainy and looks like it was taken from an old film stock, or lost VHS tape. The less than ideal presentation unfairly taints what is otherwise a solid production that deserves a much better looking reissue.