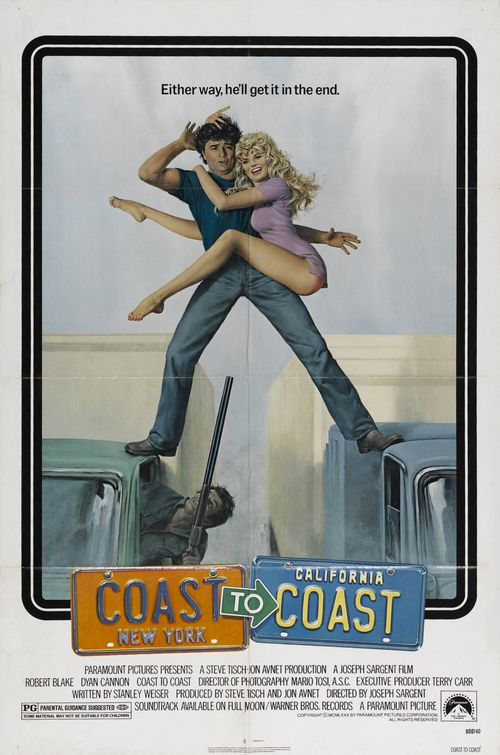 Maddie (Dyan Cannon) escapes from a mental hospital after she finds out that her husband (Quinn K. Redeker) had her committed there simply so he could avoid an expensive divorce. On the run she hitches a ride with truck driver Charles Callahan (Robert Blake) who reluctantly takes her in despite having troubles of his own including running from a man named Jules (William Lucking) who is after him for late payments on his truck. Together the two ride all the way from New York to California dealing with calamity and even some romance along the way.

Cannon has not had a lot of success in films where she has been the star, but she scores here and pretty much saves it and deserved top billing over Blake. Her energetic upbeat personality that has just a tinge of the fun-loving despite the circumstances helps keep things moving and entertaining. I loved the fact that she had herself trained on how to drive a big rig, so she could go through exactly what her character did when she first gets behind the wheel. The part where she climbs into some stalls housing a bunch of cows including a wild steer deserves mention for her tenacity, which is something some other plastic Hollywood stars wouldn’t even consider.

Blake on the other hand doesn’t fare as well and his attempts at trying to leave Maddie behind and stranding her in the middle of nowhere does not make his character very likable. He is also a poor choice for a romantic lead and the scenes in the snow where they finally do kiss seem forced and unnatural.

The casting of 60-year-old Maxine Stuart as a tough talking bounty hunter out to nab Maddie is interesting simply for its novelty. Lucking literally puts his body on the line getting chased by a steer that comes very close to nailing him. Michael Lerner is entertaining as the psychiatrist who gets knocked out by a bust of Sigmund Freud and then put into a strait-jacket and left on the side of the road.

The film though is disjointed and the first hour runs flat and fails to gain any momentum. The broad humor is not very funny and the couple’s constant bickering is more tiring than engaging. There is also the problem that the story is all about this great big cross-country trip that they take and yet it was entirely filmed within the state of California. Obviously this was for budgetary reasons, but when the film’s theme centers on a big trip then they should’ve taken the extra step and done everything on-location where the scenery could have helped during the slow parts of which the film has many.

The second hour manages to be a bit of an improvement. The part where Maddie takes her big truck and drives it through her husband’s posh garden party is amusing especially when she proceeds to crash the rig right through the wall of their big house and then careen’s the thing straight through their living room, which is done in slow-motion. This scene as well as the shocked reactions of the snotty party guests is enough to save what is otherwise a misfire.