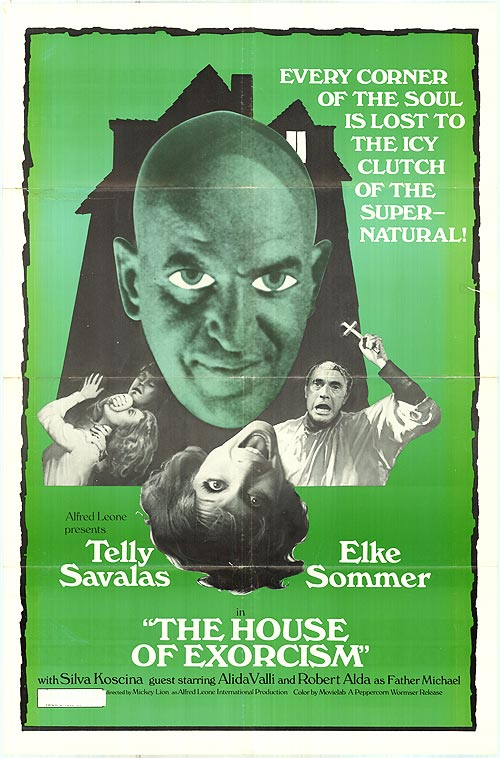 4-Word Review: Possessed by the devil.

When Mario Bava’s Lisa and the Devil, which was reviewed yesterday, failed to generate any business at the box office the film was reedited using footage cut from the first film as well as adding some new scenes. In this version Lisa (Elke Sommer) is a tourist in Spain who becomes possessed by the devil right out in broad daylight on the cobbled streets and in front of her fellow tourists. She is taken by ambulance to the nearest hospital and accompanied by Father Michael (Robert Alda). The doctors are unable to explain her condition medically and as she gets worse and more violent it is up to the Father to excise the demon.

This version is an improvement over the Bava one in fact Bava’s name doesn’t appear anywhere on the credits and instead the film’s producer Alfredo Leone is listed as the director under the pseudonym Mickey Lion. Obviously it’s a huge rip-off of The Exorcist and in some ways gets unintentionally funny particularly when the Priest has a conversation with the demon during the exorcism. However, it is still fun and more flamboyant than the original and at least has a coherent plot that helps propel the movie along. The only problem is that the exorcism scenes are intercut with scenes from the original film showing Lisa visiting the mansion and meeting up with the strange characters. Supposedly this is the alternative reality that she is in while the demon possesses her body, but it adds little and bogs down the pace.

Sommer comes off much better here than she did in the first one. The way she contorts her face during the possession sequence is entertaining and she does well under the difficult demands. Telly Savalas as the devil disguised as a butler is still wasted. He doesn’t even seem to be taking the part seriously and seems to give it a tongue-and-cheek approach, which doesn’t work.

Alda’s presence is rather bland, but Carmen Silva who plays Anna his wife before he entered into the priesthood is a stunner. She appears nude in a rather gratuitous flashback segment that should more than appease any self-respecting voyeur.

The ending has a little more pizazz than the original as well where the Father goes into an empty mansion and tries to fight off the demon while having snakes thrown right at him. It’s not the best, but not the worse either.