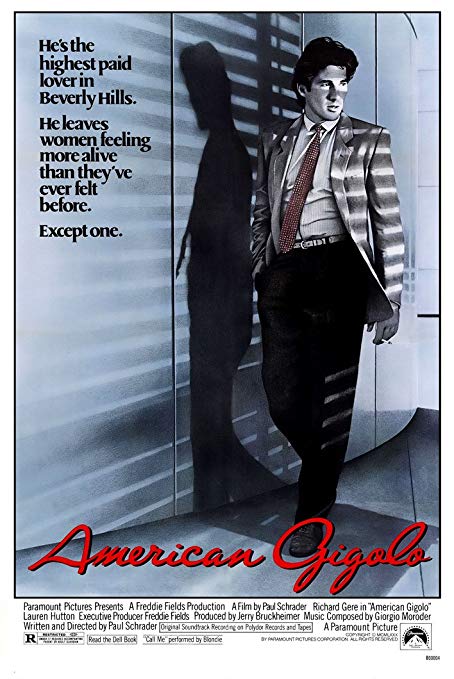 Julian (Richard Gere) works as a male escort in the Los Angeles area servicing affluent female clients, which allows him to drive expensive cars and live in a luxury apartment. He even gets into a relationship with Michelle (Lauren Hutton) a senator’s wife, but just as everything seems to be going his way it comes crashing down when he gets accused of murder, which he didn’t commit. His only alibi is Michelle who he was in bed with that night, but she is reluctant to come forward fearing it will tarnish both her reputation and that of her politically ambitious husband (Brian Davies).

The film’s chief asset is Gere’s performance who puts a gritty edge in a film that is otherwise quite shallow. His character though is blah as we learn little about him, which I found frustrating. Male prostitution is not a profession most men get into, so why does Julian? Having a backstory dealing with his upbringing and showing his relationship with his family could’ve helped us better understand his motivations, but none is ever shown leaving us with a character that may look sexy, but is otherwise an empty shell that is neither interesting nor memorable.

The film offers no insights into the sex profession either. I kept wondering how he was always able to ‘get-up for the occasion’ with all of his clients especially when a lot of them were older women who were not all that attractive. Many male actors working in the adult film business will admit to taking Viagra or some other drug to guarantee an erection on cue. They also have women working behind-the-scenes as ‘fluffers’ who will give male performers a hand-job/oral sex, so when it’s time for his scene he’s erect, but Julian doesn’t have any of these things, so what’s his secret? The film makes it look like he can get-it-up on demand, which in reality I don’t think would always be the case.

I was also disappointed when Julian is told by the husband (Tom Stewart) of one of his clients to get rough with her by slapping her and Julian turns around with a shocked expression, but then the scene immediately cuts away without seeing what happened. I felt this was a crucial moment that needed to be played-out and it would’ve helped us understand Julian better by seeing how he responds to demands that he’s uncomfortable with. The film most likely cutaway because seeing him slap a woman would’ve made him unlikable to the viewer, but if he’s the type of person who will compromise his ethics to make money then we need to know this, or if he returns the money and walks away we need to see this as well.

Julian’s relationship with Michelle is ridiculous and unbelievable. Why would a guy who’s been to bed with hundreds of different women suddenly decide to fall-in-love with this one and why would a woman, who’s otherwise living a comfortable lifestyle, allow herself to fall for a man whose profession won’t allow him to be faithful to her? It doesn’t help either that Hutton gives a horribly wooden performance and it would’ve been far better had Julie Christie, who was the original choice for the role, played the part

The mystery angle is somewhat intriguing, but the wrap-up gets botched by suddenly instituting long pauses between scenes in which the screen goes completely black and silent for several seconds, which is jarring since this was not done at any earlier time and only helps to cement how over-the-top Paul Schrader’s directing is. Had more effort been put into character development instead of flashy lighting/camera angles we would’ve had a more interesting movie.