One day while flying over the Kalahari desert a airplane pilot inadvertently throws a coke bottle out of his cockpit window, which falls to earth and is found by Xi (N!xau) and he brings it back to his nomadic tribe. At first everyone is intrigued with the object as they are an isolated people unaware of modern technology. They think it’s a ‘gift from the gods’ and make use of the bottle in different and creative ways, but eventually the bottle causes friction from within the tribe because there is only one and no one wants to share it. Xi decides to ‘give the bottle back to the gods’ by traveling to the end of the earth and throwing it off. During his journey he meets a clumsy biologist named Andrew Steyn (Marius Weyers) and a pretty school teacher named Kate (Sandra Prinsloo) while also saving school children who are kidnapped by a group of terrorists led by Sam (Louw Verwey).

This film became the biggest box office success in South African history and when released abroad became the most successful foreign film in the U.S., but the film initially comes off like a nature documentary complete with monotone voice-over narration by Paddy O’Byrne only to then shift uneasily into a flick dealing with political revolutionaries who systematically massacre the heads of state via machine gun. It’s not until about 30 minutes in that the gentle comical flow of the story gets going, but even then there’s a lot of sped up stop action photography, dubbed voices, and a cartoonish sounding musical score that gives it a choppy amateurish feel throughout.

Yet despite all this the concept is quite original and filled with genuinely funny moments. Writer/director Jamie Uys, who appears briefly as a Reverend, shows an amazing ability to squeeze laughs out of virtually any scene and sometimes in the most amazing of ways. Some of my favorite moments was when the jeep hangs upside down in a tree, or the scene showing the same disabled jeep getting tugged along by another vehicle and because the desert was so flat and barren the man driving the vehicle is able to get out of it and it simply drives itself with no fear it would run into anything. The shot where N!xau arrives at what he thinks is the end of the earth, but in reality is a place known as God’s Window is quite memorable and picturesque as well.

Of course the film does come with its fair share of controversy and accused of being racist with two countries, Trinidad and Tobago, banning the movie from being shown there because of it. The main complaint centers around the bushmen tribe that N!xau comes from being shown as completely cut-off from the modern world and unsophisticated when in reality this is not true. The 2004 Columia TriStar DVD edition has a wonderful documentary called ‘Journey to Nyae Nyae’ on its bonus section where a filmmaker travels to the real-life desert bushmen tribe that actor/star N!xau resided and found that although the people were quite poor they were far from ignorant and in fact excitedly embraced technology like a computer when it was shown to them. There’s even a really cute segment where the children get shown this film and laugh along at all the same antics just like American audiences.

This same documentary also has a very sad edge to it as it shows the impoverished life N!xau had even after the film became a worldwide hit. While the movie grossed over 200 million N!xau was only paid $2,000 for his work and the other actors who played the bushmen got paid nothing. Director Uys tried to rectify this by paying N!xau many years later an additional $20,000 and a monthly stipend, but by then he had already become sick with tuberculosis and ended up dying from it in 2003. 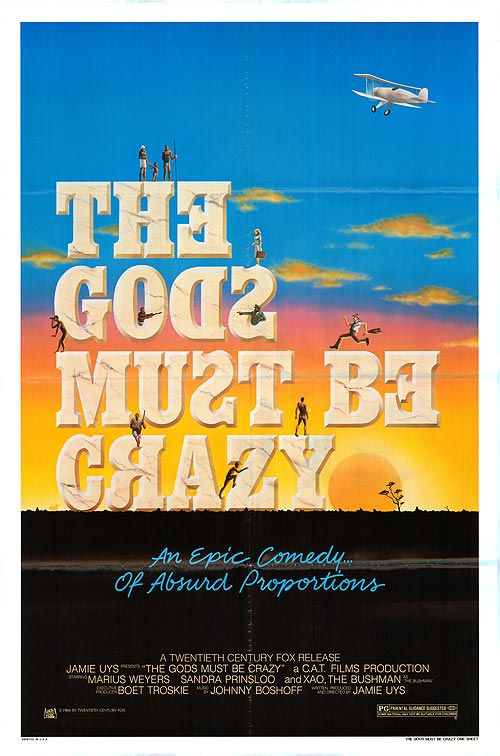