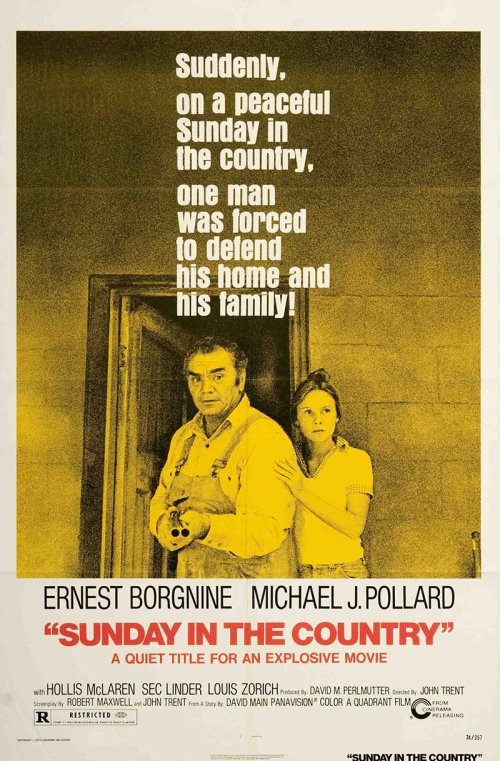 Adam Smith (Ernest Borgnine) is a Canadian farmer living in a rural home who becomes aware via the radio of reports of three bank robbers (Cec Linder, Louis Zorich, Michael J. Pollard) on the run in the area who’ve just killed a young man and his girlfriend who were his friends. He prepares for their arrival and when they come he shoots and kills one of them while taking the other two into his cellar where he hangs them on meat hooks. Smith’s granddaughter Lucy (Hollis McLaren) finds this treatment inhumane and wants to call the police, but Adam won’t let her and the two quarrel until he locks her in her room, but she escapes and runs for help, which enrages Adam even more.

The film almost gets ruined by an obnoxious musical score that is so heavily tinged with country twang that it seems almost like a parody of itself and makes the entire production come off as cheesy and amateurish. It would’ve been better without any music at all as it ends up taking you out of the action like having someone sitting beside you and rudely talking and not letting you concentrate on what’s happening on the screen.

As for the story it makes some good observations about just how thin the line can sometimes be between the good guy, or those that feel they’re morally justified to inflict whatever style justice they deem necessary, and the so-called bad guy. Unfortunately the character arch of the protagonist happens too quickly without much of a back story explaining why this otherwise law abiding farmer would deviate so quickly into an abuser. What makes him different from others who would’ve called the police? Just saying that he’s ‘old fashioned’ and ‘from a different era’ I didn’t feel was enough of an explanation.

With the exception of Pollard the robbers aren’t intimidating enough and it some ways came off as pathetic and not like professional crooks at all. This might’ve been intentional on the filmmaker’s part in an effort to make the viewer more sympathetic to their quandary once they are held hostage, but in the process it lessens the tension and makes them seem not as threatening.

Borgnine does a terrific job through his facial expressions of showing the character’s inner turmoil as well as constantly exposing his human side even as he forges ahead to doing some not-so-nice things. McLaren is also superb and her interactions with Borgnine are the most compelling aspect of the film.

Pollard is great here too and I was surprised as he’s not always able to find roles that match his unique talents and sometimes has been relegated to thankless and forgettable supporting parts, but here he’s viscous with a most creepy sounding laugh.

Unfortunately the eye-for-an-eye concept doesn’t get examined enough and the film could’ve gone a lot farther with it than it does. It still manages to bring out many interesting issues but the story should be remade and without the corny soundtrack.

Alternate Titles: Vengeance is Mine, Blood for Blood

Little Fauss (Michael J. Pollard) is a motorbike racer who is shy, has few friends and still lives at home with his parents (Noah Beery Jr., Lucille Benson). Halsy (Robert Redford) is a brash womanizer whose been kicked out of the racing league for drinking on the track. He befriends the timid Little and conspires with him to race in his place while splitting the winning proceeds 50/50. Little’s parents do not approve of Halsy and feel that he will be a bad influence, but Little sees this as an opportunity to break away from his parent’s while befriending someone whose lifestyle he idolizes. Things start out poorly and only get worse particularly when the they meet up with the free-spirited Rita (Lauren Hutton) who chooses Halsy over Little despite the fact that Little has a crush on her.

The film has a nice gritty feel to it and the harsh desert landscape helps accentuate the hardened, rough living characters. The racing footage is also well done and just like with Downhill Racer, which was a film about skiing that Redford did just before this one, the viewer feels like they are in the middle of the action driving the motorbike along with the characters with wipeouts and crashes are real and at certain spots genuinely violent. I also enjoyed Benson and Beery’s performances and wished they had been in the film more as well as the opening tune sung by Johnny Cash although it became distracting when it gets played later on and should’ve been contained over the credits only.

Redford gives a stellar performance playing a character unlike any he has ever done and he does it convincingly to the point that the actor’s son in real-life considers this to be his father’s best onscreen achievement. Pollard though is solid too in a part that he seemed almost born to play. The two, who apparently didn’t get along well behind-the-scenes, play off each other in interesting ways and the movie only works when the two share the screen and is draggy when they don’t.

The story has its share of decent dramatic moments but it is also quite predictable. Redford’s character is completely unlikable and I would’ve liked one moment where he did or said something nice, or at least given us more of a background for why he turned out at being the way he was. The way Little outgrows the friendship and eventually becomes more confident and self-reliant is rather formulaic and like with most everything else in the film one can see coming long before it happens, which eventually makes the viewing experience of this thing feel almost like a nonevent.

This is a look at an underground/counter-culture newspaper staff and the conflicts and concerns that they have at being taken over by a no-nonsense corporate owner (Lane Smith).

The film almost immediately takes you back to the bygone era of the late 70’s. The attitudes and conversations are realistic for that period and anyone who lived through it will most assuredly feel nostalgic .John Heard, Jeff Goldblum, and Bruno Kirby are engaging in their respective parts as is most of the cast. Stephen Collins is good also, but in an unusual role for him as he usually plays nice sensitive types, but here is a more driven, intense, and confrontational. This also works as a good unofficial statement to the death of the counter-culture movement and the eventual rise of materialism.

The story starts out well as it looks at the inside workings of an underground newspaper, but then spends too much of the middle part focusing on the relationships of some of the characters. Only at the end when the new owner takes over does it get back to the newspaper angle. Unfortunately it concludes just as things are getting interesting and we never get to see how the characters survive and adjust to the takeover. The film would have been much stronger and original had it stuck to scenarios involving the newspaper business and scrapped the relationship stuff, which tended to be derivative. Jon Korkes and Michael J. Pollard’s characters are seen too little and needed more screen time.

Also, when the film deals with the relationships there seems to be too much of a feminist bias as the men are always shown to be the ones at fault due to their ‘insensitive and selfish natures’ while the women come off the ones who are ‘reasonable and unfairly neglected’. This could be a product of the fact that it was directed by a woman as well as the era where men were somehow supposed to feel guilty simply because they were men.

This is fun as a time capsule as well as a great chance to see young stars in the making. However, the story does not take advantage enough of its original concept and ends up dealing with a lot of the same old scenarios and story lines that we’ve all seen before. Director Joan Micklin Silver and John Heard teamed up again two years later for Chilly Scenes of Winter, which I felt was better.