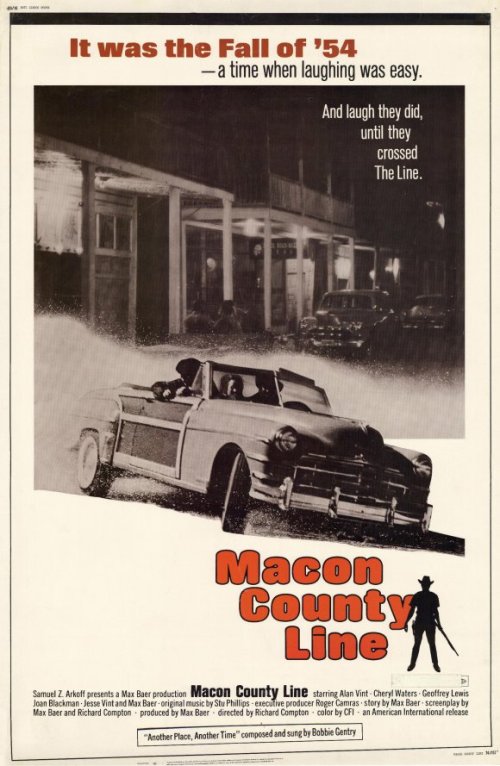 The year is 1954 and Chris and Wayne Dixon (played by real-life brothers Alan and Jesse Vint) are two brothers traveling through the Deep South for one last hurrah before joining boot camp. Along the way they pick up attractive hitch-hiker Jenny (Cheryl Waters) and the three appear ready to party it up when their car suddenly breaks down in front of an isolated country home. Unbeknownst to them the home’s inhabitant (Joan Blackman) has been murdered and when her husband, who just so happens to be the county sheriff, (Max Baer Jr.) arrives to find the carnage he immediately suspects it’s the kids sleeping in the nearby car. Thus begins a wild night chase through the country backwoods as the three try desperately to outrun a man with an unrelenting rage while pleading with him that they are innocent.

The film is a definite step above the average drive-in fare of that era with characters that manage to avoid the usual stereotypes and clichés. The 1950’s are painted in a little more of an edgier way and populated by people that are much more crass than what you will find in an old episode of ‘Leave it to Beaver’ or some sanitized recreation of that period, which I found to be refreshing. The music, particularly La Vern Baker’s gospel tinged opening song and Bobbie Gentry’s closing one is great and really helps to create a definitive mood. There are also two really good flashback sequences including a dimly lighted, moody one dealing with police brutality of a criminal and an ‘interrogation’ scene done at a police station that isn’t bad either.

Unfortunately the story is thin and hinges solely on the frantic chase that takes up the movie’s final 20 minutes, which is well edited and even features a twist ending, but up to then it is rather uneventful with too much time spent on the trio’s visit with a dimwitted auto mechanic (played by Geoffrey Lewis) that adds unnecessary comic relief.  There is also an ill-advised, dream-like segment where Jenny and Chris decide to take off their clothes and make love in some stagnant water found inside an old, rusted circular drinking trough in an abandoned barn that not only takes away from the film’s grittiness, but also seemed extremely unhygienic as well. I was also expecting more car chases especially with all he nicely refurbished vintage cars that appear, but the only one that they do have gets shot at night and the camera focuses more on the driver’s nervous faces in a cheesy melodramatic style than on the automobiles.

The film was produced and co-written by Max Baer Jr. who is better known as Jethro from the hit 60’s TV-series ‘The Beverly Hillbillies’ and in fact he wrote the story for this movie on the back of some Hillbilly scripts during breaks in filming. Although this was filmed in Sacramento the location is supposed to be the south and could’ve been either Georgia, Tennessee, or Alabama as all three of those states have a Macon County, but the real irony is that the two brother are from Chicago and we even see a close-up of their Illinois plate, which also has a Macon County although it’s likely the story wasn’t set in that one. 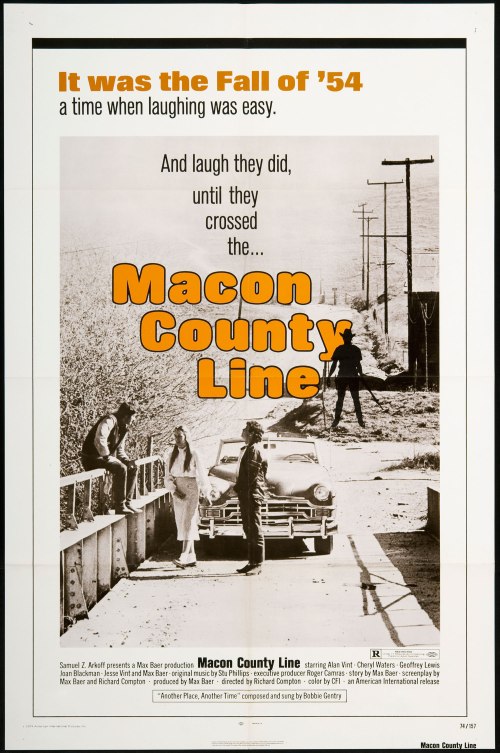