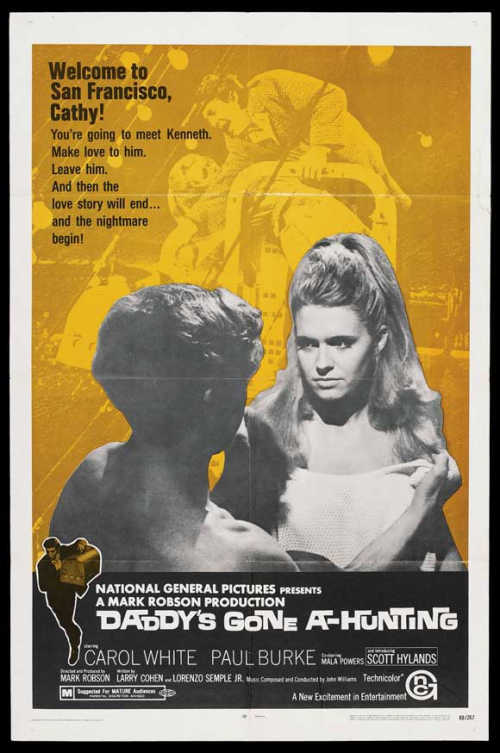 Cathy (Carol White) moves from England to San Francisco and almost immediately meets Kenneth (Scott Hylands) and the two get into a relationship. Cathy though slowly sees a dark side to him that she doesn’t like so she breaks up with him, but only after she finds out that she is pregnant. Since she is struggling to make it on her own she decides to have an abortion, which her friend Meg (Mala Powers) informs her is no worse than having a ‘hangnail’. When Kenneth learns of this he becomes enraged and promises revenge. He continues to stalk her from afar as she gets into a new relationship and then eventually marries prominent politician Jack Byrnes (Paul Burke). When she becomes pregnant again Kenneth reappears and tells her that this baby must be killed to make up for the one she ‘murdered’. After the baby is born he kidnaps it setting off a police manhunt throughout the city to find him and save the child.

Although this is a thriller you would hardly know it at the beginning as the movie starts out with a bouncy jazz score that does not create any type of menacing mood. It also initially dwells on Cathy and Kenneth’s early courtship and even has a sappy love song played over scenes of them kissing and walking hand-in-hand, which is awkward and even corny. I believe all thrillers should give some clue or warning to the tension and horror that is coming right from the start and this one doesn’t, which is weak.

However, after the first fifteen minutes it starts to get going from the suspense end and the rest of the way it is good if not excellent. I liked how the viewer is kept in the dark as to whether Kenneth is really stalking Cathy or it is all in her paranoid mind, which helps add an extra level of intrigue.

Director Mark Robson’s career was up and down, but he really scores here. The shot of a close-up of a cat’s eye showing the reflection of Cathy and Kenneth making love on a sofa was novel. I also liked how the abortion sequence is handled by showing a stark shot of the operating table coupled with Cathy’s nervous expression, which is surprisingly quite effective and brings out the horrors of the procedure, but without going overboard. I also appreciated that a real infant is used and not just a doll wrapped in a cloth like with some films. Showing a real live kicking and crying baby especially in close-ups makes it all the more emotionally compelling for the viewer when Kenneth tries to harm it.

Hylands is fantastic in the lead and one of the reasons this film works. He has the perfectly creepy face and menacing ability and this is by far his best performance in his long, but otherwise undistinguished career. White is also really good although she was far from being the producers first choice. Her blonde hair, accent, and angelic features make a perfect contrast to Hyland’s. Paul Burke is solid as the husband. It’s a bland part, but he tends to be good in those.

Although the abortion issue continues to be a hot and emotional topic for most this is not a political film and the emphasis is on being a thriller. However, when you couple this with screenwriter Larry Cohen’s It’s Alive movies you can probably assume he has an agenda in this political arena. Some may enjoy the way Kenneth relentlessly torments Cathy and refuses to allow her to forget what she did. He also kills the doctor who performed the procedure and what he does with the dead body afterwards is well…interesting.

Cohen and co-scripter Lorenzo Semple Jr. put their very creative minds in full gear here. The scenarios are well thought out and the tension builds at a great pace. The climatic sequence that takes place on top of the Mark Hopkins hotel at the Top of the Mark bar is exciting and visually well captured.

The only major flaw I saw with the film is at the beginning when Kenneth first sees Cathy standing on the sidewalk in downtown San Francisco he grabs some snow that is on a nearby car, makes it into a snowball, and then throws it at her to get her attention, but why in the world would there be snow on a car in downtown Frisco? This is never explained, but I felt it should have been.