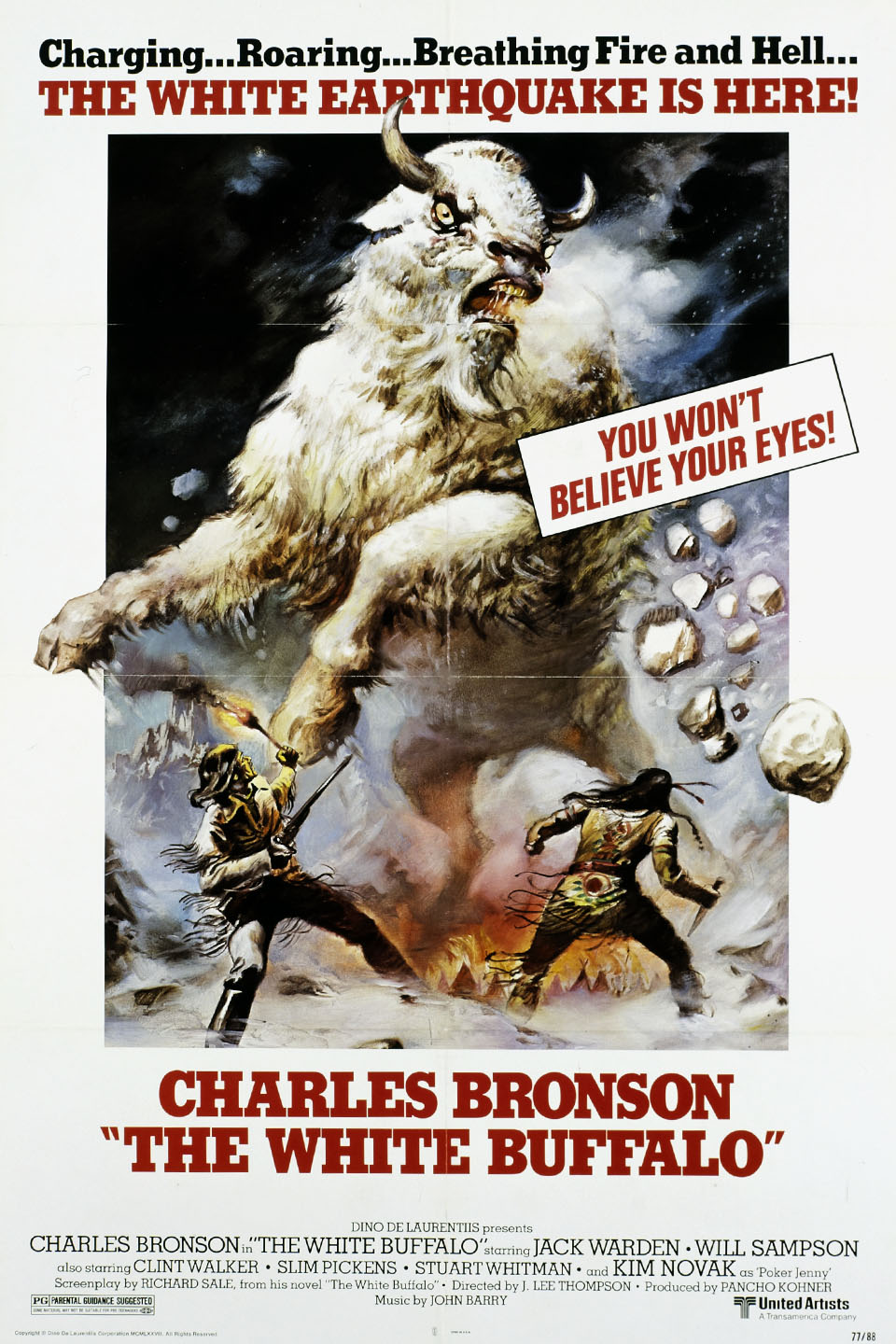 Based on the novel by Richard Sale, who also wrote the screenplay, the story, which takes place in 1874, centers around Wild Bill Hickok (Charles Bronson) who’s suffering from reoccurring dreams involving a giant white buffalo. He travels to the west in order to find the beast and confront it. It’s there that he meets Crazy Horse (Will Sampson). The two initially don’t get along. Bill is not a fan of Indians and once said “the only good Indian is a dead one”, but the two share a common bond as they’re both after the elusive buffalo in Crazy Horse’s case it’s to avenge the death of his infant daughter who was killed when the beast violently attacked their campsite. Having formed an uneasy alliance the two, along with old-timer Charlie Zane (Jack Warden) go out into the cold, wintry terrain in search for it while debating over whose land this country really belongs to: the white man or the Native Americans.

Story-wise the film lacks any explanation for why Hickok is having these dreams, or what exactly the image of the white buffalo is meant to represent if anything. The plot goes off on a lot of tangents including a segment where Hickok visits an old-flame (Kim Novak) that doesn’t have much to do with the central story, nor propel the plot along, and could’ve easily been cut. There’s also a few proverbial gun fights though they’re generic in nature, don’t add much excitement, and quickly forgotten.

Bronson gives his typical wooden performance though seeing him with dark circular glasses and sporting long hair does make him, in certain shots, resemble Ringo Starr. The rest of the cast if filled with familiar B-stars in minor roles including Stuart Whitman and Cara Williams, who have an amusing bit as a vulgar couple whom Hickok shares a stagecoach ride with. Jack Warden, who’s almost unrecognizable, has a fun moment when he takes out the glass eye that he’s wearing much to the shock of Crazy Horse.

The only diverting element is the opening dream sequence that’s done over the credits where the viewer looks right into the eye of the beast close-up. Normally I’m not a fan of outdoor shots done on a sound stage, which always comes-off looking artificial, but in this instance it helps accentuate the surreal elements. The climactic sequence though in which both Hickok and Crazy Horse come face-to-face with the buffalo doesn’t work as it becomes painfully clear that the beast is special effects generated especially when Crazy Horse gets on top of it and repeatedly stabs it, which looks like someone stabbing into a sofa cushion with tacky fur stuck to it. We also never get to see a full-shot of the buffalo, just its head, so it’s difficult to gauge how big it really was. The truly disappointing part is that the illustration of the buffalo on the film’s promotional poster seen above is far more impressive looking than anything you’ll actually see in the movie.

Probably the only interesting aspect about the production is not what occurred in front the camera, but behind-the-scenes. Will Sampson, who’s by far the better actor and the story could’ve been centered around his character alone and it would’ve made it a more interesting movie, refused to read his lines for over 24 hours when he became aware that white actors had been hired to play the roles of the Native Americans and only went back to performing his role once the producers agreed to casting actual Indians for the parts. This then directly lead to the American Indian Registry of the Performing Arts, which he founded. 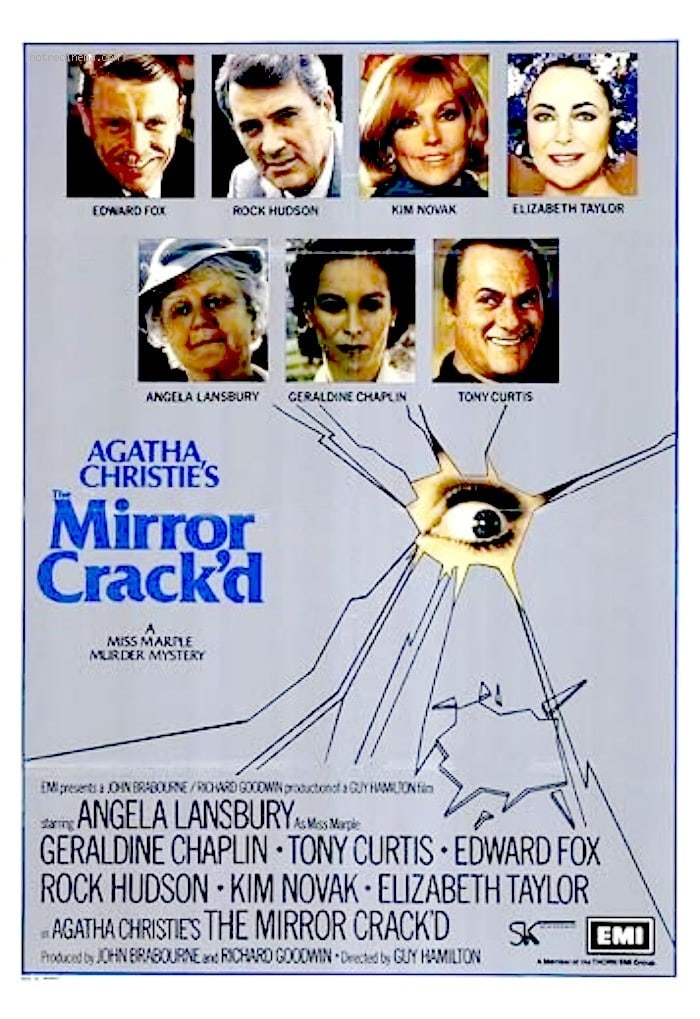 4-Word Review: Poison in her drink.

A Hollywood production company arrives in a small English village, where Miss Jane Marple (Angela Lansbury) resides, to film a costume drama. The film will star two actresses, Marina Rudd (Elizabeth Taylor) and Lola Brewster (Kim Novak), who are also bitter rivals. A reception is held to allow the villagers to meet the celebrities. During the reception Marina speaks with Heather Babcock (Maureen Bennett) a devoted fan who tells Marina about having met her years earlier backstage.  While she bores Marina with the details she also drinks a daiquiri cocktail that was laced with poison causing her to die and propelling Miss Marple, who is bedridden with an injured foot, and Inspector Craddock (Edward Fox) to investigate the case.

If there is one reason to checkout this otherwise so-so film it’s to see Taylor and Novak go at it as rival actresses. This was Taylor’s first feature film appearance in 4-years and, if you don’t count her cameo appearance in The Flintstones as well as 1987’s The Young Toscanini, which was never released in the US, the last one of her career. Her standout performance, which amounts to being a mixture of camp and poignant drama, more than makes it worth it and Novak is in top form as well playing-up the comic wickedness to a delicious level. Even Rock Hudson, who was reunited with Taylor 25 years after having done Giant together, does quite well as Marina’s exasperated husband.

Unfortunately Lansbury gets miscast as she was only in her mid-50’s while Marple was considered an elderly woman in her 70’s or 80’s. They dye her hair white in an attempt to make her appear older, but it still doesn’t quite work. It’s also a letdown not to have her in the majority of scenes like you’d expect. While I never read this Agatha Christie novel I have read some others as well as the movies that have been made from her works and all of them had the head detective taking an integral part in the investigation and not shackled up in her home doing nothing to propel the potentially engaging banter that she could have had with the suspects as she interviewed them. Ultimately the supporting cast gets more screen time than she, which was a waste.

The glossy cinematic element that was so apparent in other Agatha Christie movies like Murder on the Orient Express and Death on the Nile is totally lacking here. Some of the on-location shooting does take place in what would be considered large mansions, but the interiors resemble rooms seen in any old building and convey no flair or distinction. Director Guy Hamilton admitted to not liking Agatha Christie’s books nor thinking much of the script, which he openly stated to the producers during the interview and yet they decided to hire him anyways,  but the result, with the exception of the kitschy film-noir opening bit, is mechanical while relying solely on the veteran cast to keep it interesting.