Jake (voice of Ronnie Schell) is an alien who closely resembles a cat that lands his disabled spaceship on earth and is unable to get help from his mothership to return back to his planet. Using his powerful collar that allows him to speak telepathically he seeks the assistance of Frank Wilson (Ken Berry) a lab assistant who seems smart enough to understand Jake’s dilemma. Before they can do anything though the army comes in and takes the spaceship and stores it inside a warehouse under tight security forcing Frank and the cat to break into the building in order to retrieve the ship and get the cat back to his planet.

I admit that when I was 9-years-old I watched this movie and came away thinking it as ‘pretty cool’ and for a kid I suppose this could still seem passable, but for any discerning adult it’s nothing more than mumbo-jumbo sci-fi. The biggest issue is the collar, which allows the cat way too much power.  He, or anyone else touching it, can do virtually anything even flying through the air or moving other objects through mind control. The thing is so powerful that you hardly feel that the cat is in any type of real danger, which hurts any potential tension. The plot has one caveat, which is if the collar is ever taken off of the cat then he is helpless. Yet this rarely occurs and when it does he, or somebody else, is able to retrieve it quickly making this plot-point a mute issue. The collar even allows him to fly a disabled plane making me wonder why then he couldn’t just use it to do the same thing to his disabled spaceship.

The film is different from other Disney films of that era in that it doesn’t end with a climactic car chase, but instead has a hair-rising finish in the air with Berry standing on top of an airplane wing trying to rescue his girlfriend Sandy Duncan who is trapped on a helicopter that has no pilot. The stunt work for this is quite impressive and exciting, but I kept wondering how long a helicopter could go in the air without a pilot before it would spin out-of-control and crash. Of course this finally does occur once Duncan is conveniently rescued, but I kind of felt in reality it would’ve happened much sooner.

The film’s final scene involves the cat getting sworn in as a United States citizen, which is pretty loopy since he’s still allowed to go around wearing his collar, but how could the government trust anyone with that since it would virtually allow them to do just about anything? And wouldn’t it attract foreign powers looking to steal if for their own nefarious means making the film’s ending seem more like just a beginning to a far more complex subplot.

The cast is unusual for a typical Disney film too in that there’s not a single child or teen present even though it’s a movie aimed for kids. Instead it has Berry who is so utterly benign he becomes offensive in his inoffensiveness. McLean Stevenson as his sports betting pal is fun and Harry Morgan is quite amusing playing another one of his blustery overly-authoritative characters. Schell, who speaks for the cat, gets a small role as one of the members of the army, but has his voice dubbed. James Hampton, who appeared with Berry in the TV-show ‘F-Troop’, can be spotted in a small role as well. 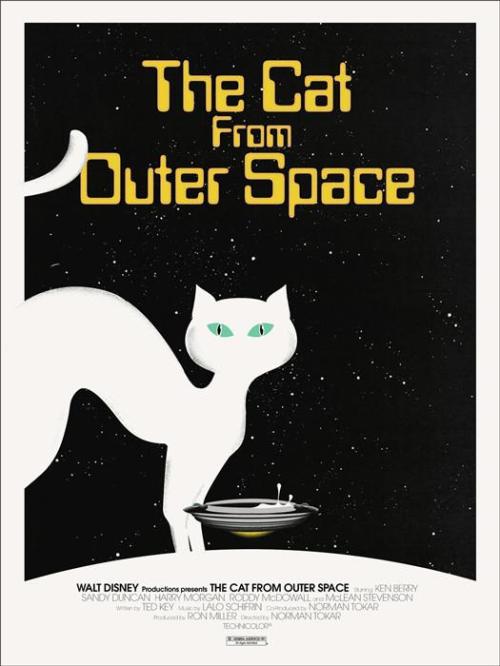