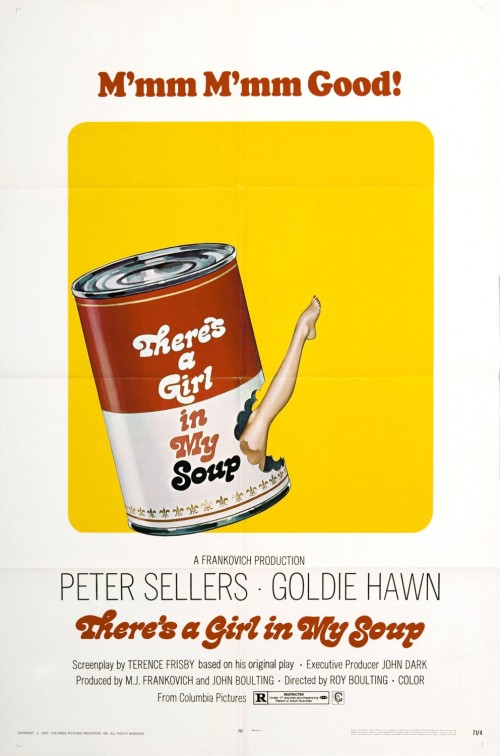 Robert (Peter Sellers) is a dashing playboy who enjoys having random sexual encounters with women, even having sex with a bride on her wedding day. Despite being in his 40’s he shows no signs of wanting to settle down and get married. Then he meets Marion (Goldie Hawn) a groupie for a rock band who finds out that its lead singer Jimmy (Nicky Henson) has been unfaithful to her. With nowhere else to go she lets Robert pick her up and take her back to his pad where he tries to seduce her, but without much luck.

Although the stageplay for which this film is based did quite well its translation to the screen leaves much to be desired.  Despite director Ray Boulting’s efforts to liven up the scenery by placing several scenes in exotic locales while also sprucing up Robert’s place by inserting his bathroom to have all mirrors in it that cover both the walls and ceiling, the film still ends up coming off like a filmed stageplay that lacks both energy and action. Even the dialogue, that usually helps  keep other plays that have evolved onto the big screen, lacks bite and becomes as stale as the rest of the proceedings.

The relationship is only funny when Marion rebuffs Robert’s advances and openly tells him how unsexy he really is, but when she foolishly ignores her better judgement and starts falling for the cad is when the whole thing goes downhill. There’s also confusion for why Robert, who openly enjoyed his single life and sleeping around with various beautiful women, which he seemed to have no trouble getting, would suddenly fall for a young woman that he didn’t have much in common with. For a relationship to begin both sides have to initially be looking for one and there is absolutely no hint that is what Robert wanted, so what about Marion got him to suddenly change his mind?

Sellers is okay although critics at the time complained that his performance was ‘lifeless’, which it is, but he makes up for it with his Cheshire cat grin. The role though doesn’t allow him to be inventive, or put on many of his different accents or personas, which he is so well known for. The character and situation are also too similar to the one that he played  in I Love You Alice B. Toklas, which he did just two years earlier.

Hawn is great and I enjoyed seeing her playing a snarky woman instead of the spacey blonde that she usually does, you even get a nice shot of her naked backside, but her character is too similar to one that she did in Butterflies are Free. In fact the two people that come-off best here are not the stars at all, but instead John Comer and Diana Dors as a middle-aged, bickering couple who should’ve been given more screen time.

Overall there’s just not enough laughs here to make sitting through it worth it. The plot has no point and the characters don’t grow or evolve making it a waste of time for its two leads whose talents are above this type of material.