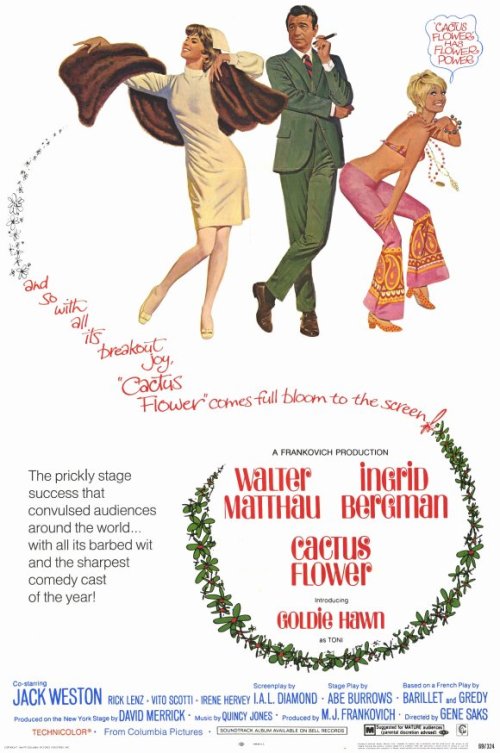 4-Word Review: Pretending to be married.

Julian (Walter Matthau) is a dentist who enjoys duping the women he sees into believing that he is married, so he can have the benefit of fooling around with them without the commitment (a sort of ‘friends-with-benefits’ scenario before it became in vogue). Problem is that his most recent girlfriend Toni (Goldie Hawn) wants to get married and threatens to kill herself unless he divorces his wife. Julian readily agrees, but Toni wants to meet his wife first, so he gets Stephanie (Ingrid Bergman) who works as his receptionist to pretend to be his wife. Things though don’t go smoothly as Stephanie has feelings for Julian and Toni realizes this, which makes her reluctant about pursuing her marriage plans with him.

The film is based on the hit Broadway play by Abe Burrows, which in-turn was based on a French play by Pierre Barillet. The plot may sound funny, but it’s actually rather dumb. There’s plenty of men who pretend not to be married when they are in order to have the excuse to fool-around and they’re women who pretend to be married when they really aren’t in an effort to ward off a guy who’s hitting on them, but a guy pretending he’s married to get women to go to bed with him seems pretty strange and I really didn’t get the logic. From his perspective I get it, sex without-the-strings, but what exactly is the woman getting out of it?

Had Toni been using Julian just like he was using her it would’ve made more sense by having her get into the relationship to benefit off of the money he was willing to spend on her, but Toni actually wanted commitment and marriage! Besides that why is she suddenly so concerned about the wife’s feelings now as she’d been having a relationship with Julian for a whole year before and not worried about it then?

There’s also the issue of why this swinging bachelor who’s commitment-phobic already is going to want to get tied-down by a ditzy lady who threatens suicide every time she doesn’t get what she wants. Better for him to dump her now and find some other chick to dupe.

I had problems with Bergman’s character too. For one thing I wanted to see more of a character arc. Having her portrayed as a sexually oppressed, cold, bitchy lady at the start who only softens at the very end once she finally finds ‘true love’ would’ve been more dramatic, but Bergman plays the part too nicely and the bitchy side gets underplayed. Lauren Bacall originated the part on Broadway and I was surprised she was that she wasn’t given the opportunity to reprise the role for the film because if there is one woman who can play a bitch to perfection it’s her.

Gene Saks’ lifeless direction is another detriment. The sets are dreary and unimaginative. The scene at the club is boring because the place has no pizazz. This was the late ‘60s and they should’ve attended some far-out psychedelic place with heavy rock music and people strung-out on acid. Toni could’ve felt comfortable being there while Julian and Stephanie wouldn’t be. This then would’ve given the opportunity to focus on the generational gap between the two as Julian was 25 years older than Toni, but the film really never touches on that.

Hawn’s Academy Award winning performance is excellent especially the close-up shot where her big blue eyes well up and a single tear trickles down her face. The scene at the club where Bergman comes up with ‘the dentist dance’ that everyone else imitates is funny. Otherwise the trite plot is too superficial to be either believable or interesting.

Andy Schmidt (Henry Winkler) is a college student with a driving ambition of becoming a star. He is constantly doing things to be the center of attention including being a scene stealer in every stage play that he is in even if his role is minor. He meets and falls in love with Mary (Kim Darby) and the two move to New York, but find that life in the big city can be difficult especially when Andy is unable to secure any type of acting gig. Then by chance he meets Milton (Herve Villechaize) who is a dwarf wrestler that gets Andy connected to his promotor Milton (Gene Saks). Milton thinks Andy’s need for attention and flamboyance would be perfect for the theatrics of the wrestling world and although he is initially reluctant eventually starts to love it even when his wife hates it and threatens to leave him unless he quits.

Winkler’s performance is the film’s driving force and outside of his signature role as The Fonz this has to be his best work. I enjoyed the variety of characters that he plays in the ring, but the character himself tends to be quite obnoxious and borders on being a complete turn-off especially at the beginning. It is also hard to believe that anyone could fall in love with someone who is so extremely narcissistic and self-centered making the whole romance angle seem forced. The role also, during the scenes when he is in the ring and wearing very little, shows just how short and puny Winkler really is.

The script by Steve Gordon, who later went onto to pen and direct the Dudley Moore version of Arthur, seems reluctant to dive completely into the wrestling angle even though these scenes are by far the most interesting and funniest and when it gets away from the ring its predictable and contrived. I also couldn’t understand how they were able to maintain an apartment as small as it was when Andy was unable to get any type of job or income and the idea that they had unprotected sex and brought in an infant into the world when they could barely support themselves seemed utterly ludicrous. The film’s setting is during the 50’s, but it never comes full circle into the 70’s making it seem incomplete and the characters not as evolved as they could’ve been.

Darby does well in her part and works as a nice anchor to Winkler’s unbridled zaniness. I also really liked Polly Holliday best known for her role as Flo on the long running TV-series ‘Alice’ as Darby’s uptight mother who finally lets loose at the very end while watching Andy in a wrestling match. Saks has a lot of funny lines especially the running joke dealing with his ‘weird’ son, but his glasses that seem glued to his forehead eventually became annoying to look at.

On the negative side you also have rotund actor Richard Karron who’s excessively hairy, flabby physique, which gets shown in all of its unglorious splendor during one particular match may possibly be one of the grossest sights ever put on celluloid. The casting of the infant is another issue as when he is shown in the hospital he has a full head of blonde hair and then in all the subsequent scenes he has dark black hair.